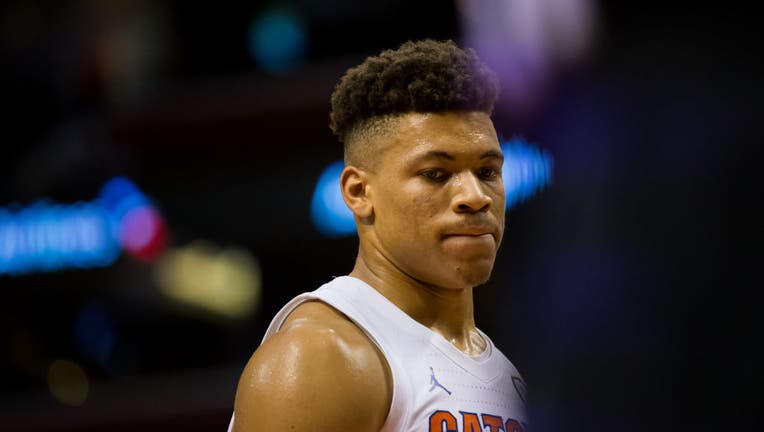 GAINESVILLE, Fla. - Florida forward Keyontae Johnson is back with the team and working as a coach in practice, coach Mike White said Monday.

Johnson was released from the hospital last week, 10 days after collapsing on the court at Florida State and needing emergency medical attention.

White said "I have no idea" whether Johnson will be able to play again this season and added, "even if I did, I couldn’t talk about it" because of privacy laws.

The Gators (3-1) postponed four games following Johnson’s collapse and took 15 days off. They returned to practice Sunday and will get back on the court Wednesday night at Vanderbilt, the Southeastern Conference opener for both teams.

"Our guys are ready to move forward, not move on from Keyontae, but move forward with him," White said.

Kentucky’s John Calipari is one of several coaches across college basketball who have said they would like to know if Johnson’s collapse was related to his positive COVID-19 test months earlier.

Johnson’s parents family have said they "are committed to sharing not only updates on Keyontae but also any information we think could help others."

TRENDING NOW: Hundreds turn out to thank Virginia UPS driver for deliveries, kindness: 'He makes you feel like a friend'

Although the cause of Johnson’s collapse has not been revealed, the coronavirus can lead to myocarditis, a viral infection of the heart muscle. At its most severe, myocarditis can lead to sudden cardiac arrest and has been a documented cause of death for young, otherwise healthy athletes.

The SEC mandates protocols, including rigorous heart testing, before players can be cleared to return to play following positive COVID-19 tests.

Johnson crumpled to the floor coming out of a timeout on Dec. 12. He was moved to a stretcher and carried to a waiting ambulance as teammates, coaches, staff, fans and others watched in disbelief.

ESPN declined to show video of the incident. Witnesses said Johnson was standing near midcourt and suddenly fell forward and landed on his face. White gave his players several chances to quit playing the game, but they insisted they wanted to play for their fallen teammate.

VACCINATION DISTRIBUTION: COVID-19 vaccine distribution at Oviedo Mall to begin for those with appointments

"I don’t even think I finished the game," guard Noah Locke said. "Mentally, I wasn’t even there."

Johnson spent two nights at Tallahassee Memorial before being transferred to Gainesville via helicopter with his mother by his side.

White said Johnson already has mentioned that he’s "ready to roll" and wants to practice, but doctors will decide when and if that happens this season. Until then, the Gators will be without the SEC’s preseason player of the year.

"We won’t be the same team," White said.