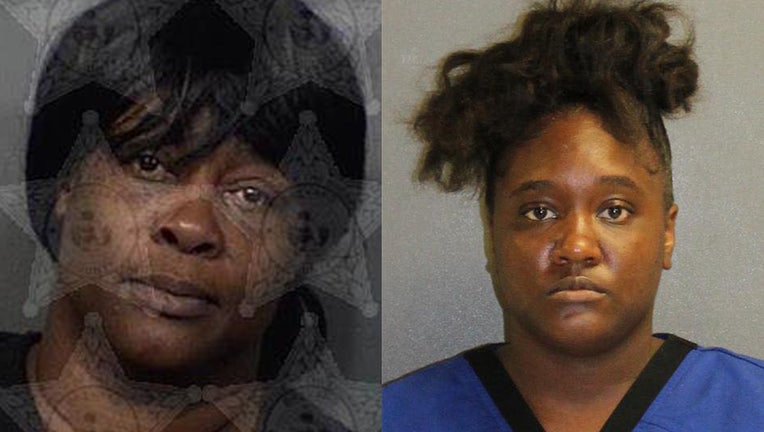 BREVARD COUNTY, Fla. - The Brevard County Sheriff’s Office has arrested Tanya Galvin, 41, and Ricky Nicole Tubbs, 25, in connection with the death of a 6-month-old baby found in a plastic container.

The sheriff's office said on March 1, a deputy saw three children between the ages of 2 and 4 walking alone on Caroline Street in Cape Canaveral.

After finding out where the children lived, deputies went to the home and found Galvin asleep.

"Galvin advised that she did not know where the children were and assumed they were with Ms. Tubbs," the sheriff's office reported.

Deputies say the 2-year-old was "wet and smelled of urine."

MORE NEWS: Deputies: Toddler tries to climb through sunroof after being left in car for 30 minutes

While looking for diapers to change the child, a deputy discovered an infant, nude and unresponsive in a plastic storage container.

Deputies immediately began CPR until the arrival of paramedics.

"During CPR, water was purged from the child’s mouth and nose. The infant was transported to a local hospital where he was pronounced deceased," a news release said.

The child was identified as 6-month-old Scorpio Sharp.

An autopsy showed that he died of drowning, according to officials.

Deputies say the baby and another child under the supervision of Tubbs was placed in foster care by the Department of Children and Families (DCF).

Tubbs reportedly left the residence the night before and was to return before the children's father left for work in the morning.

When she did not return, investigators say the children's father left for work and told Tubbs to return immediately so the children would not have to be in the care of Galvin for a long period of time.

"The investigation further determined that Tubbs had consumed alcohol and narcotics during the evening and did not return to the residence, in violation of the order of DCF, until after the infant had been discovered by deputies," the news release said.

The children were reportedly alive when the children's father left for work.

Galvin is charged with aggravated manslaughter of a child and violation of probation.

She is being held at the Brevard County Jail on no bond.

Tubbs was charged with neglect of a child with great bodily harm.

She is currently being held at the Volusia County Jail on a bond of $25,000 awaiting extradition to Brevard County.