Wildlife officials have approved an unusual step of feeding manatees that face another winter of limited food supplies in Florida waters.

The state and federal agencies, which in November formed a Joint Incident Management Team to respond to the "unusual mortality event" along the state’s Atlantic coast, announced plans to use FPL’s Cape Canaveral Clean Energy Center in Brevard County as they conduct manatee rescues, recover carcasses, do health assessments and move forward with a short-term feeding trial.

"It is critical we help manatees in the short term with actions that are compatible with their long-term well-being and resilience," Shannon Estenoz, the U.S. Department of the Interior’s assistant secretary for fish and wildlife and parks, said in a prepared statement.

The feeding program is aimed at reducing manatee deaths and the number of manatees that need to be rescued.

While feeding wildlife is discouraged, more than 1,000 manatees have died in Florida waters this year, about 15 percent of the population. The deaths have been caused in large part by a decline in seagrass beds that are prime winter foraging areas in the warm waters of the Indian River Lagoon.

The state estimates that 58 percent of the seagrasses have been lost in the northern Indian River Lagoon, which has faced repeated algae blooms over the past decade.

Florida Fish and Wildlife Conservation Commission members will receive an update on the manatee conditions next week during a meeting in Destin. 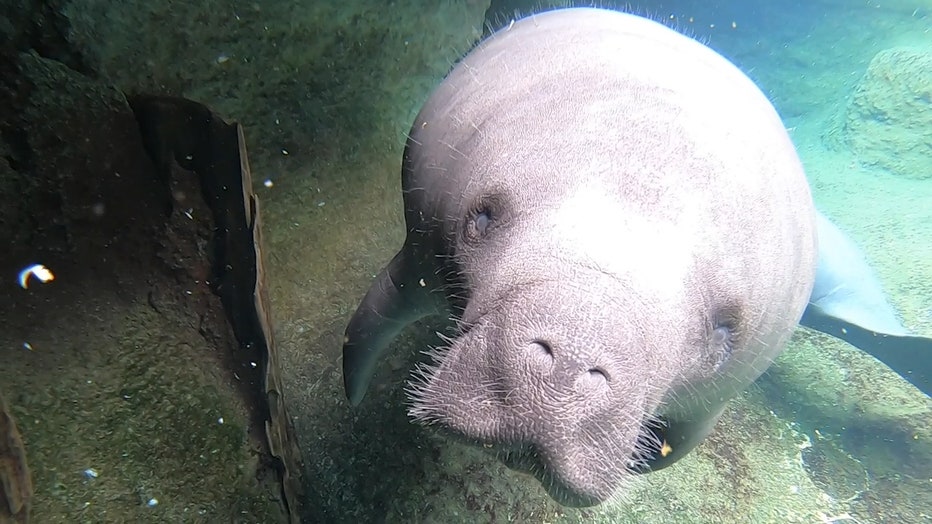 A memo posted for the meeting by Gil McRae, director of the commission’s Fish and Wildlife Research Institute, said the number of deaths declined during the summer as manatees were able to disperse from the Indian River Lagoon, but many of the sea cows remain in poor health.

"If winter weather conditions are similar to last year, manatee migratory patterns are typical, and if manatees have not fully recovered from last season, we anticipate that manatee mortality will remain at elevated levels along the Atlantic Coast for the ... winter," McRae wrote.

In a separate news release, FPL announced that more than $700,000 in grants over the next three years from its charitable arm, the NextEra Energy Foundation, will go to environmental groups to support manatee rescues and rehabilitation and habitat restoration.

Among the recipients are the Florida Atlantic University Foundation for the FAU Harbor Branch Experimental Seagrass Nursery in Fort Pierce and the Florida Oceanographic Society, which is in Stuart, to support seagrass research and seagrass nursery operations.

Each winter hundreds of manatees migrate to Manatee Lagoon near FPL’s power plant in Palm Beach County. FPL plans to add an educational seagrass nursery exhibit to the lagoon for visitors.