Two Florida teenagers arrested for their alleged involvement in the deadly shooting of a Marion County boy earlier this month have been arrested again following a suspected drive-by shooting.

LAKE MARY, Fla. - Two Florida teenagers arrested for their alleged involvement in the deadly shooting of a Marion County boy earlier this month have been arrested again following a suspected drive-by shooting.

Joshua Vining and Colton Whitler were among four people taken into custody following a traffic stop on Wednesday evening by Ocala police officers who were investigating the sounds of gunshots fired along N. Pine Ave.

Vining and Whitler were arrested by Belleview police officers on April 3 in the death of 16-year-old Christoper Leroy Broad Jr.  According to investigators, Vining and Broad were taking turns shooting at each other while wearing body armor. Vining shot at Broad who was struck and killed, detectives said. Vining was charged with aggravated manslaughter of a child with a firearm, while Whitler was charged with providing false information after investigators said he misled them with inaccurate information about the incident.

While investigating shots fired on Wednesday, officers spotted a white Mercedes four-door sedan moving "at a high rate of speed" and "failing to stop" at a stop sign.  A traffic stop was conducted along NW 20th St.  Inside the car were four "extremely nervous and sweaty" teens, officers said. Along with Joshua Vining and Colton Whitler was Jarrett Vining Jr., identified as the driver, and a 16-year-old passenger.

Officer said they noticed an empty pistol holster on the front passenger seat floorboard and saw the butt of a rifle between the legs of the driver. Due to the presence of firearms and the shots heard by officers, all were asked to get out of the car. 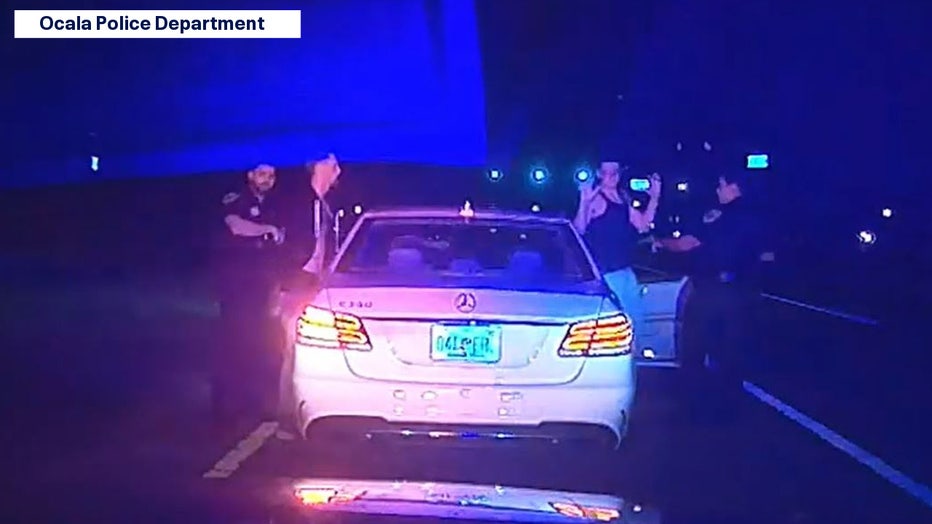 According to an arrest report, no one in the vehicle possessed a valid concealed weapon permit.  At the shooting location, detectives said they discovered numerous spent shell casings in the roadway that were consistent calibers for the guns located within the vehicles.

"Though I'm extremely proud of the vigilance our police officers had during this shooting incident, I'm also very alarmed that just a few weeks ago, two of these teenagers were involved in a manslaughter case in Belleview that ended another teen's life." Ocala Police Chief Mike Balken said. "Here they are again with more felony gun charges. This is yet another disturbing example of legislative failures within our juvenile justice system."