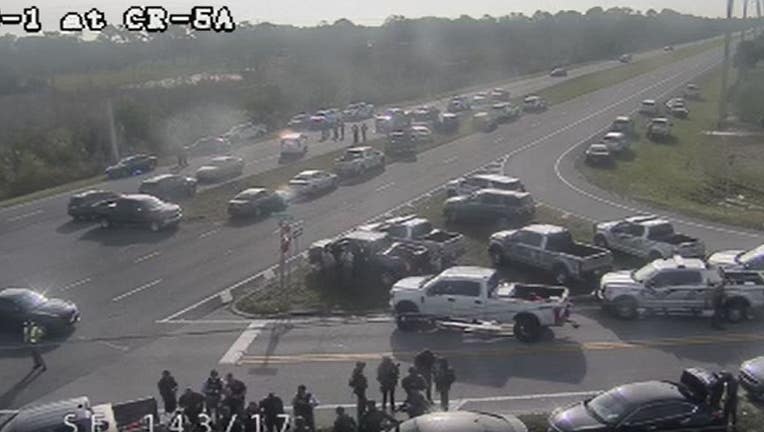 COCOA, Fla. - A 17-year-old wanted for attempted first-degree murder was arrested on Wednesday after leading authorities on a chase across multiple counties, Cocoa police said.

Detectives began investigating after reports of a missing and endangered juvenile who ran off with her 17-year-old boyfriend. According to police, the boyfriend is suspected of an attempted murder that happened late Tuesday at a home on Japonica Lane where the victim was stabbed and beaten. The victim is in the hospital in critical condition.

A bulletin went out to law enforcement agencies in other counties be on the lookout for the suspect. Because of his age, FOX 35 is not showing his face at this time.

During the investigation, authorities found out that the teen, his girlfriend, and another person were in Volusia County. When Volusia County deputies tried to make contact with them, the teen and others in the vehicle reportedly fled, leading deputies on a pursuit into Brevard County. The vehicle crashed just south of the county line off SR-5A near U.S. 1. That's when police say the suspect and two others bailed out of the car and fled on foot.

The 17-year-old man surrendered to Brevard County Sheriff’s Office SWAT officers who were actively searching a wooded area off of SR-5A near U.S. 1.

"He's in jail. He's locked up exactly where he needs to be where he can't hurt anybody else," said Brevard County Sheriff Wayne Ivey.

Sheriff Ivey shared video of the suspect – who is wearing a Chicago Bulls hoodie – as he was put in the back of a patrol vehicle.