Bill that would prohibit discrimination against natural hairstyles

A Florida lawmaker has proposed legislation that would end discrimination based on natural hairstyles. Sen.&nbsp;Randolph Bracy III, District 11, wants to get the “Creating a Respectful and Open World for Natural hair”, or CROWN Act, passed in the 2020 legislative session.

ORLANDO, Fla. - A Florida senator plans to introduce a bill that would protect race-associated hairstyles from discrimination.

Sen. Randolph Bracy III, District 11, wants to get the “Creating a Respectful and Open World for Natural hair”, or CROWN Act, passed in the 2020 legislative session.

It would prohibit discrimination of race-associated hairstyles like twists, braids, and dreadlocks from discrimination at public schools and at work.

“People need to know that they’re protected and that they can express themselves in a way that’s fitting,” Senator Bracy said at a news conference Friday.

Using Cheryl Couture Inc., a locally-owned African American women’s salon in Orlando, as a backdrop for his announcement, Sen. Bracy said several incidents in Central Florida and across America prompted him to draft the bill.

“You’re seeing it in society. I mean, you’re seeing kids that aren’t allowed to participate in activities. You’re seeing people reprimanded at work and we’re talking about natural hairstyles," he said.

Bracy hopes the bill will help people become more confident with their hairstyle choices if the bill is passed.

“I just think that hopefully this bill will create more cultural awareness and help people understand what others go through when they’re preparing for the workplace and school, and allow for people to have more cultural sensitivity,” he said.

Cheryl Couture, a long-time hairdresser, and owner of Cheryl Couture Inc. said she has several clients who have reservations about embracing their natural hair. 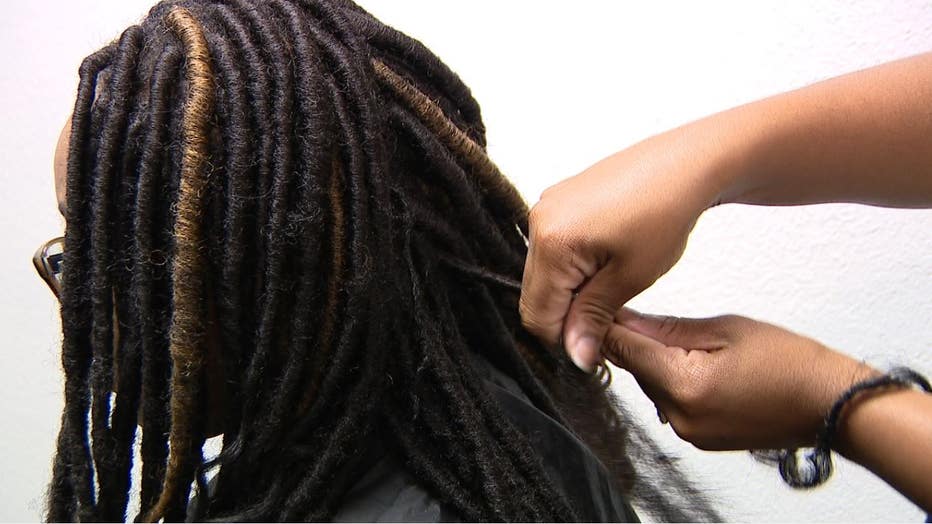 “It’s kind of like a stereotype, but they think they have to wear their hair either straight or presentable to look the part,” Couture said.

She said some clients even hide their natural locks when they’re in a professional setting.

“I have people that have dreadlocks, but they have to braid it down and put a wig on top of it just to go to work, and I’m like, 'You shouldn’t have to do this.'”

Clark started her natural hair journey in 2007 with an afro and said she had anxiety about embracing her natural locks.

She is now the first Ms. Corporate America in the competition’s 12-year history to have dreadlocks.

“It was tough. It was really tough at first, but I decided I had to make a stand. This is who I am," Clark said.