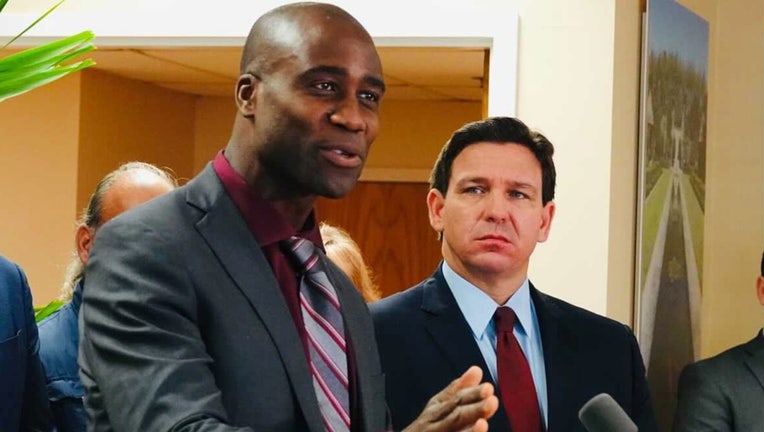 TALLAHASSEE, Fla. - Gov. Ron DeSantis’ appointment of Surgeon General Joseph Ladapo was confirmed Wednesday by the Senate, despite objections from Democrats who criticized his handling of the COVID-19 pandemic.

A 24-15 party-line vote displayed the fissure between the parties on DeSantis’ approach to the pandemic, which in the past year has mostly concentrated on treating people who have tested positive for COVID-19 rather than boosting vaccinations. Ladapo has often echoed DeSantis’ positions since the September appointment.

Senate Health & Human Services Appropriations Chairman Aaron Bean, R-Fernandina Beach, said Ladapo has gone against the COVID-19 "narrative," which might scare people, but he "follows the science and questions it."

But Democrats argued that DeSantis has politicized the public health system. They questioned why they should trust Ladapo, who they contended doesn’t act in the best interests of all Floridians, doesn't think independently and couldn’t answer questions in Senate committees without first getting the position of the governor’s office.

RELATED: Florida's top doctor kicked out of meeting after refusing to wear mask

Sen. Tina Polsky, D-Boca Raton, called Ladapo, who doubles as secretary of the Florida Department of Health, a "mouthpiece for skepticism."

"There is a place in science for those who like to go against the grain, like the radical America's Frontline Doctors with which he is associated, and that place is research or academia, which is his specialty," Polsky said. "He can publish all the editorials he wants to decry accepted science. But what he cannot and should not do is lead the Florida Department of Health."

Sen. Lori Berman, D-Delray Beach, said Ladapo also did not offer responses about issues related to HIV and the opioid epidemic during his committee appearances.

"We need a state doctor who has the skills to be a public health leader," Berman said. "The surgeon general needs to protect our citizens as we transition from a (COVID-19) pandemic to an endemic and face other health crises."

Ladapo has joined DeSantis in questioning the effectiveness of COVID-19 vaccines, opposing lockdowns and rejecting mask and vaccination requirements.

Ladapo, who watched Wednesday’s confirmation debate from the Senate gallery, said he’s looking forward to focusing on health issues. He described the federal approach to the pandemic as "fear and coercion" and said he didn’t take the job "for the politics. I'm here for health."

"It just so happens that the governor and I happened to sort of see things similarly amongst some major health issues," Ladapo said. "And that's good, because I think that's the right way to see it. And I think that's the way that's best for Floridians."

He declined to say if he has disagreed with the governor or raised objections on any health issue, calling their conversations private.

With about 69,000 Florida residents killed by COVID-19, Democrats said the state needs a top physician willing to push back against DeSantis’ handling of the pandemic.

Sen. Jason Pizzo, D-North Miami Beach, said Ladapo’ predecessor, former Surgeon General Scott Rivkees, could have been "fine" if allowed to speak beyond the official line of the governor’s office.

"I asked you (Ladapo) for the sake and safety of our children, speak up," Pizzo said. "No one's ever going to criticize you for going against the opinion of somebody else who's running for re-election. So, earn it. Because today, you don't have it."

Ladapo, who also has a faculty position at the University of Florida College of Medicine, has described the Department of Health’s approach to the pandemic as providing education and access, rather than "coercion" and "propaganda" and that "people can make decisions for themselves."

Ladapo is a Harvard Medical School graduate and former UCLA researcher, where he focused on fighting cardiovascular disease and worked on the cost-effectiveness of diagnostic technology.

Before the Florida appointment, he was already deviating from the medical establishment. He argued in opinion pieces against COVID-19 lockdowns and appeared with a group of physicians on the steps of the U.S. Supreme Court promoting the benefits of hydroxychloroquine --- a medicine primarily to treat malaria --- against COVID-19.

Democrats walked out of a Jan. 26 meeting of the Senate Health Policy Committee instead of voting on the confirmation because they said Ladapo was not answering questions.

After that, Ladapo drew additional scrutiny because of a Florida Department of Law Enforcement background check conducted for the Senate. In the report, an unidentified former supervisor of Ladapo’s at UCLA’s David Geffen School of Medicine said Ladapo’s hands-off approach to COVID-19 violated the doctor’s Hippocratic oath of doing no harm and "created stress and acrimony among his coworkers and supervisors."

Ladapo brushed off the criticism during an appearance before the Senate Ethics and Elections Committee, where he noted other former co-workers praised his work and that he was more concerned with "how some science has been ignored the past two years when it doesn’t fit the agenda, and how opinions that are different from the mainstream have been suppressed."

In October, Ladapo refused to wear a mask when he and two aides arrived for a meeting in Polsky’s Senate office to discuss the confirmation. Polsky told Ladapo she had a serious medical condition --- later announced as breast cancer.

Ladapo defended his decision by saying he cannot communicate clearly "when half of my face is covered."