Olympic organizers insist that the games will go forward in Tokyo despite reports that the Japanese government is planning to cancel the event.

Florida is offering to host this summer's Olympic games.

Olympic organizers insist though that the games will go forward in Tokyo despite reports that the Japanese government is planning to cancel.

Florida's Chief Financial Officer posted a message on social media to the Olympics Committee suggesting that they should consider Florida because "no other place in the world has what we have to offer." 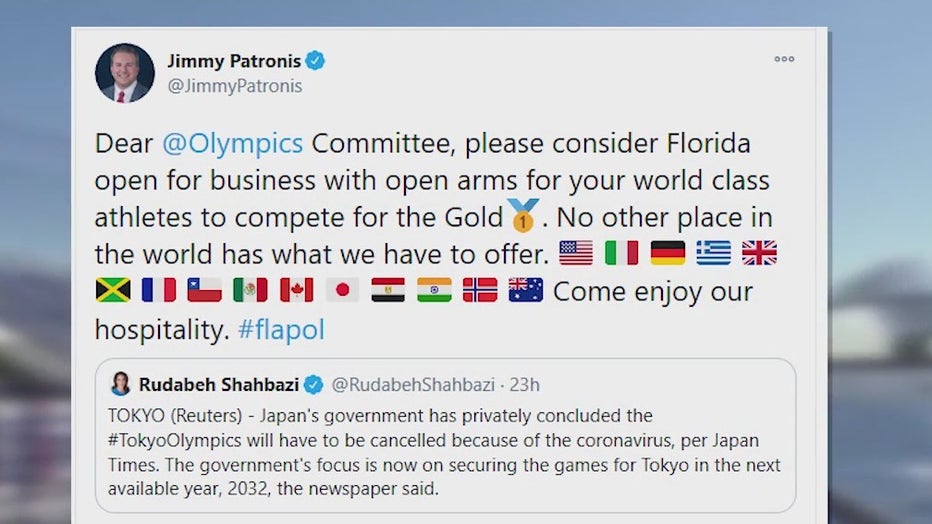 The Japanese government official who dismissed canceling the event said Tokyo could instead host in 2032, after Paris and Los Angeles take their turns in 2024 and 2028, respectively.

Speculation was fueled this month when Japan’s government put Tokyo under a state of emergency order to curb a surge of COVID-19 cases.

The virus is resistant to being brought under control worldwide. Its future path is uncertain as more transmissible mutant strains emerge. Vaccination programs have been slower than hoped for in some wealthier countries that secured significant numbers of doses.

If an unwanted cancellation decision must be made, it should be led by Japanese authorities. The United Nations could be asked to help, a veteran IOC official suggested this month.

If clarity is needed soon, with more than 15,000 Olympic and Paralympic athletes due to compete in Tokyo, March has key dates in the Olympic calendar.

The IOC has meetings scheduled March 7-12 in Athens, Greece, if such gatherings are possible. The full membership is set to re-elect Thomas Bach unopposed for a second presidential term. Then on March 25, the torch relay is due to start in Japan. It will involve 10,000 runners across the country.

The postponement last March was announced two days before the torch relay was to start.

MORE NEWS: Stimulus checks and your 2020 taxes: All of your questions, answered

2021? It’s this year or never: So runs the consistent message out of Tokyo and the IOC’s home city of Lausanne, Switzerland.

For the games to go ahead as planned, the travel, quarantine and safe conduct rules will be strict. These would apply also to any fans allowed to enter venues.

Organizers plan to publish within weeks "Playbooks" that "outline the personal responsibilities each person attending the games must follow," the International Paralympic Committee said Friday. The Tokyo Paralympics start Aug. 24.

2022? There was support last year in Japan for a two-year postponement direct to 2022.

One factor tempts some to think 2022 is open: There is no soccer World Cup in its usual June-July slot. The other global sports behemoth was moved in 2015 by FIFA to play in Qatar from Nov. 21-Dec. 18 next year.

A bigger barrier to this option is the extra costs and fatigue in Japan of extending contracts for one more year. For staff, venue rentals, hotels and, crucially, the athlete village. Owners of pre-sold apartments in the 5,600-unit complex are already being compensated for waiting one more year to access their property.

MORE NEWS: Dems looking to introduce bill that would offer families at least $3k per child

2032? The next available slot in the four-year Summer Games cycle is 2032, after Paris and Los Angeles.

Could Tokyo be offered it to cancel this year and re-start in several years’ time? That would upset would-be hosts already talking to the IOC.

An Australian bid centered on Brisbane is a front-runner in a new process that aims to be more pro-active and cut costs. The is promoted by Australian Olympic official John Coates, a key Bach ally.

Financial implications for Olympic stakeholders of canceling Tokyo are huge though likely not crippling.

The IOC earned $5.7 billion in the four years to the 2016 Rio de Janeiro Olympics, and would have expected more from Tokyo.

Broadcast and sponsor deals are at risk, though the IOC has strong relationships with long-term commercial partners. The most consequential deal, NBC’s broadcast rights in the United States, is worth $7.75 billion through the 2032 Summer Games.

The IOC was insured against a cancellation in 2020 but that policy did not cover a postponement.

It does have substantial reserves, including an Olympic Foundation portfolio worth $989 million according to the published accounts for 2019. The fund’s purpose includes "to cover the IOC’s operating cash requirements in the event of a cancellation of any future Olympic Games."

The IOC is due to share about $600 million among 27 sports as their share of its Tokyo Olympics revenue.

Canceling Tokyo is a big hit for some of those governing bodies, though most have their own reserves. They also had access to loans from the IOC and government of Switzerland, where most are based.