Millions of dollars from Florida's state budget will be funneled into projects to protect manatees and their habitats as their population faces high death rates.

PANAMA CITY BEACH, Fla. - State wildlife officials Wednesday approved a seasonal no-entry zone in an area of Brevard County waters where manatees gather, while preparing for a second winter of feeding the sea cows to try to prevent deaths.

The approval came after the Florida Fish and Wildlife Conservation Commission confirmed this month that it will again work with the U.S. Fish and Wildlife Service to feed lettuce to manatees. The agencies also took the unusual step last winter, as manatees starved because of a lack of seagrass, a key food source. 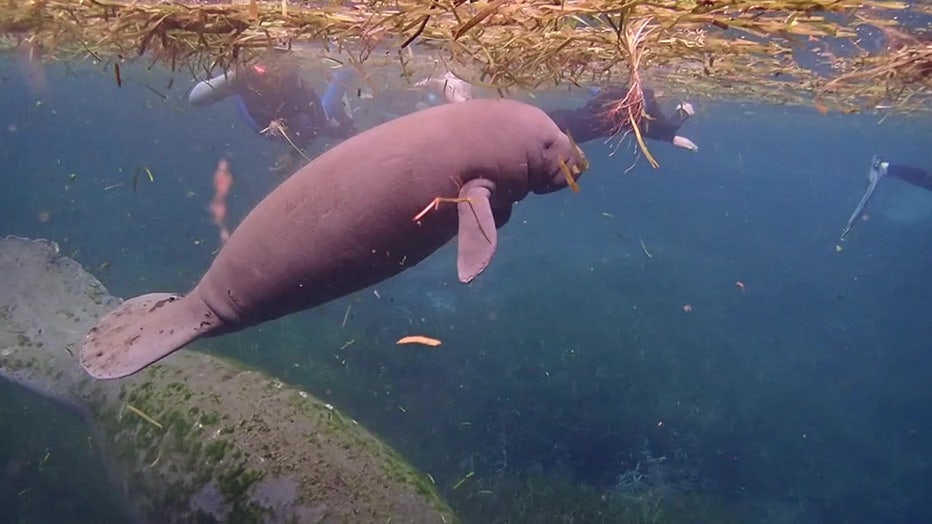 "We are poised and ready to manage our manatee situation in the Indian River Lagoon, much as we have, but with improvements based on what we have learned," Fish and Wildlife Conservation Commission Executive Director Eric Sutton said Wednesday during a meeting at the Bluegreen’s Bayside Resort and Spa in Panama City Beach.

Poor water quality and algae blooms have depleted seagrass beds that provide a key food source for manatees in the Indian River Lagoon.

"Water quality improvements and habitat restorations are ongoing," Sutton said. "So, we are hoping that this will be a bridge to help us."

The no-entry zone approved Wednesday will further restrict access of boats and people around Florida Power & Light’s Cape Canaveral Energy Center, where manatees congregate during the winter because of warm water. The zone is aimed at providing additional protections for the slow-moving sea cows.

When a golden retriever paddled a little too close to a herd of manatees in the waters off Alabama's Gulf Coast, the startled sea cows erupted into a splashing frenzy around the pup — prompting the dog to immediately make a beeline back for the beach.

Currently, the power plant’s intake-canal area is regulated as a seasonal idle-speed zone.

The no-entry classification will be in place annually from Nov. 15 to March 31. A seasonal no-entry zone had already been in place north of the discharge area targeted by the commission.

A temporary no-entry order was issued this month In anticipation of Wednesday’s action. The commission issued a similar 90-day emergency rule in December 2021.

Florida has seen an increase in manatee deaths across the state, predominantly in the Indian River Lagoon, with many of the deaths linked to starvation.

Boats accounted for 103 of the 2021 deaths. So far this year, 71 manatee deaths have been tied to collisions with boats.

A Florida photographer captured video of a brave manatee swimming behind an alligator as it glided through that water at Myakka River State Park.

In the five years before 2021, the state averaged 626 manatee deaths a year, with boat impacts accounting for an average of 96 deaths.

As part of a 2023 budget request to the Legislature, the commission is asking for $4 million to address habitat issues in the Indian River Lagoon and its tributaries and money for three full-time employees who will collect county-specific boating and manatee data.

The commission has received $28 million over the past two years to help with manatee-protection efforts, including $8 million last year to help manatees access springs and to restore other habitat.