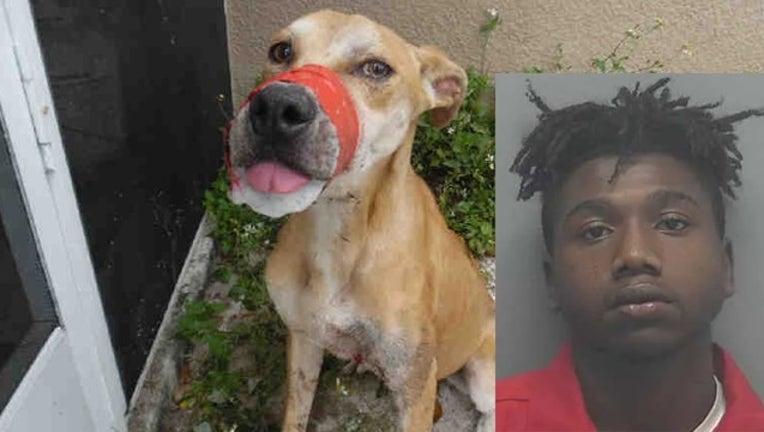 LEE COUNTY, Fla. (FOX 35 ORLANDO) - The Lee County Sheriff's Office have arrested a Florida teenager who they believe taped a dog's muzzle shut back in February.

Oscar Lee Thompson III, 18, is being held in the Lee County Jail on $5,000 bond. He's facing a charge of animal cruelty.

"If you hurt an animal in Lee County, you will go to jail," said Sheriff Carmine Marceno.

According to the Lee County Sheriff's Office, investigators pulled DNA and fingerprints off the electrical tape that was wrapped around the dog's mouth and matched them to Thompson.

Deputies had received a call on February 26 about a dog roaming through backyards on 42nd Street. In a Facebook post, the sheriff's office stated that the dog had his mouth taped shut with red electrical tape. The dog was panting, drooling, and reportedly suffocating. He was also dehydrated, appeared malnourished, and bleeding from wounds on his left arm and chest.

The dog was nursed back to health and adopted by the Lee County Sheriff's Office who appointed him a deputy. He's now named Deputy Chance and a "Spokes-Dog" for the agency.

Since joining the sheriff's office, Deputy Chance has been getting his paws dirty, attending several events including a ribbon cutting ceremony at a roller skating rink in Fort Myers and cheering on teen drivers during a Teen Driver Challenge.

"When asked to describe his first day on duty, Deputy Chance stated, “ruff," the sheriff's office wrote on Facebook.

Thompson is expected to be arraigned on June 24.