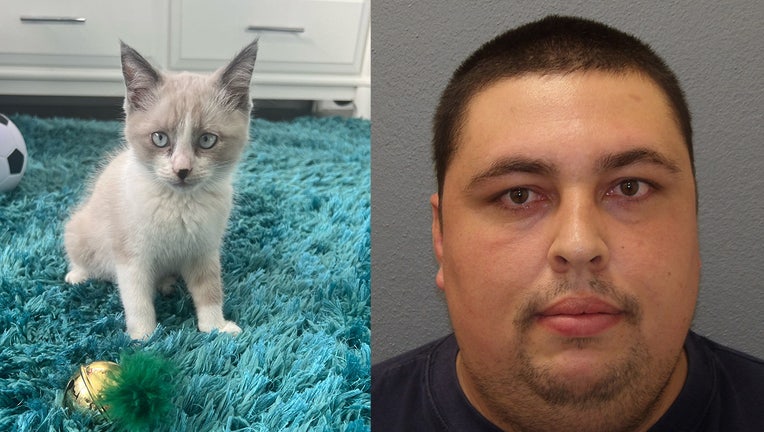 MONROE COUNTY, Fla. - A Florida man is accused of tossing two kittens out of a moving SUV. One of them later died after being hit by a car, the Monroe County Sheriff's Office said.

The sheriff's office said on Nov. 28, another driver reported seeing two kittens tumble from a Hyundai Santa Fe on U.S. 1, causing vehicles to swerve to avoid hitting them. The witness provided a description of the SUV and Ruiz was stopped a short time later. Deputies said he denied knowing anything about the kittens.

The cats were not immediately found and Ruiz was released. The sheriff’s office continued to search for the kittens.

Later that day, one kitten was found dead by the sheriff’s office after apparently being struck by a vehicle. A second kitten ran into the woods and out of sight, but was later found by a Rain Barrel Village employee and taken to Whiskers & Paws in Key Largo with non-life-threatening injuries.

The witness adopted the kitten that survived and confirmed the kittens looked like those from the incident on U.S. 1. The person also reportedly identified Ruiz’s vehicle as the suspect vehicle on the highway. The sheriff’s office notified the State Attorney’s Office and warrants were obtained for Ruiz’s arrest.

"I take these incidents very seriously and I’m happy to report an arrest was made in this case," said Sheriff Rick Ramsay.