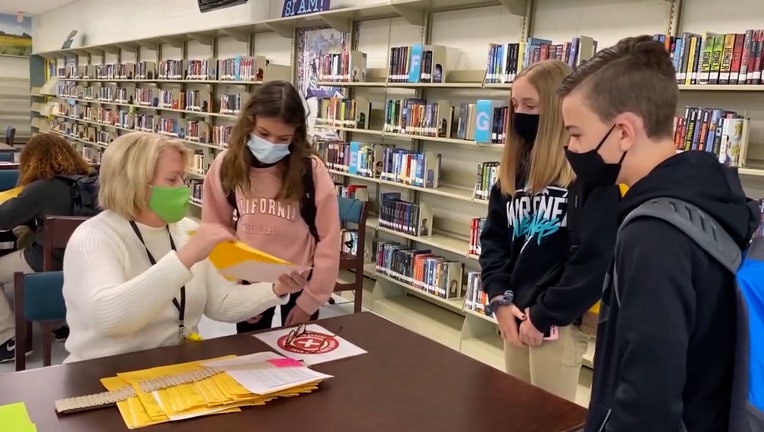 TALLAHASSEE, Fla. - A Leon County circuit judge began hearing arguments Monday in a high-profile lawsuit about whether Florida school districts should be able to set student mask requirements as COVID-19 continues to surge across the state.

Attorneys for a group of parents began calling witnesses whose arguments were geared primarily toward proving the delta variant of the coronavirus is a more potent enemy than previous variants.

The parents are challenging a July 30 executive order by Gov. Ron DeSantis that seeks to block county school boards from requiring students to wear masks. The lawsuit, in part, alleges that the executive order violates a section of the state Constitution that requires providing a "uniform, efficient, safe, secure and high-quality system" of public schools.

"Because of the delta variant, our public schools are not safe and secure at this time unless everyone wears a mask," Charles Dodson, a former judge who is representing the parents, said during an opening statement.

DeSantis, Education Commissioner Richard Corcoran, the Florida Department of Education, and the State Board of Education are named as defendants in the lawsuit, which is being heard by Leon County Circuit Judge John Cooper.

Corcoran and the state board in recent weeks have pressured school districts to follow a state Department of Health rule that said, in part, that parents must be allowed to opt-out of student mask requirements. The health department’s rule was triggered by DeSantis’ order.

The plaintiffs’ lawyers called on Thomas Unnasch, a University of South Florida professor who specializes in disease control, to reinforce the argument that the delta variant increases the need for students to wear masks in classrooms.

"This does appear to be a more pathogenic virus that’s causing more illness in children in all age groups than the variants that we’ve previously seen," Unnasch said during questioning by the plaintiffs’ attorneys.

Unnasch called into question a Brown University study cited in DeSantis’ executive order. The study was used as a basis for the order asserting there is no "well-grounded scientific justification" for forcing children to wear masks.

"The Brown University study, no, would not have reference to any data relevant to the delta variant. It was conducted in the spring of this year … during the (2020-2021) school year, spring semester. It wouldn't have included anything with the delta variant, which really took off late June, early July," Unnasch said.

Daniel Bean, an attorney representing the state, questioned Unnasch about "different opinions among experts in the medical field, regarding the efficacy of mask-wearing among students" and the transmission of COVID-19.

Dodson, in his introductory remarks to the court, called DeSantis’ order "arbitrary and capricious" and said his clients seek only to allow local control by school boards.

"We are not asking the governor to mandate masks but only that he allow local school boards to do so without punishment, should they so choose," Dodson said.

The plaintiffs’ attorneys also hoped the testimony of parents would help sway Cooper.

"You are going to hear these parents’ valid concerns for the safety of their children while in school, while this delta variant is rampant," Dodson, a former Leon County circuit judge, said.

Amy Nell, a Tampa parent of two children under age 12, was the first parent called by the plaintiffs’ attorneys. She testified that her children have not suffered any negative physical, mental or educational effects from wearing masks.

The state’s witnesses were expected to include Jay Bhattacharya, a professor of medicine at Stanford University who has participated in press events hosted by DeSantis during the pandemic.

"He will testify that in places where masks were not required, schools were low-risk environments of disease spread," said Michael Abel, an attorney representing the state.

Abel said Bhattacharya will also argue that there is "ample evidence" of physical and developmental harm to children from wearing masks.

The state’s lawyers also intend to use testimony from parents who oppose mask mandates.

"Like the plaintiff families, these are parents who care equally about promoting the best interests of their children," Abel said.

While the debate over whether to require students to wear masks plays out in court, some districts have rebelled against the state and mandated masks, with exceptions only for students with doctors’ notes.

Corcoran and the State Board of Education have taken steps to ratchet up pressure on the Alachua and Broward districts, which were the first two to go ahead with mask requirements.

State board Chairman Tom Grady and Vice-Chairman Ben Gibson signed orders Friday that threatened to withhold district funds in amounts equal to the collective monthly salaries of school board members if the districts did not change course.

In a written response to the state board Sunday, Alachua County Superintendent Carlee Simon held firm to the district’s mask policy, which she said is part of an "obligation" that the district provides safe schools.

"Universally masking is the most effective strategy we currently have, besides vaccination, to meet this obligation. We currently have 273 positive student cases and 63 positive adult cases. This number is growing every day," Simon said.

Simon told the state board that Alachua school board members make an annual salary of $40,287.

The Broward school board was given until 10 a.m. Tuesday to respond to the state, the district told The News Service of Florida on Monday.

The Broward district appears poised to keep its mask policy, as it said in a statement Friday that the school board "feels the governor is overreaching his authority."