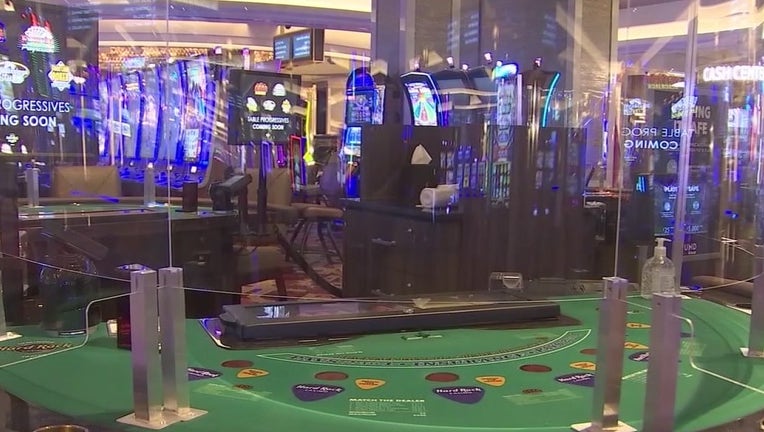 TALLAHASSEE - Gov. Ron DeSantis and the Seminole Tribe finalized a 30-year gambling agreement on Friday, inking a deal that would deliver at least $2.5 billion to Florida over the next five years in exchange for giving the tribe control over statewide sports betting.

Tribal leaders, including Chairman Marcellus Osceola Jr., joined DeSantis in his Tallahassee office for a ceremonial signing of the deal, known as a "compact."

"We truly believe that this is the best deal for everybody. It’s not in favor of the tribe or the state. It’s in favor of both parties, because this is a long-lasting team," Osceola said.

While talks between the state and the tribe had been ongoing for months, DeSantis over the last few weeks played a personal role in cementing what has been a perennially elusive deal.

DeSantis noted Friday that the agreement, which requires approval by the Legislature, would allow the state to capitalize on online sport betting.

"Sports betting really is going on already. Why don’t we come together, put some structure to this, and let it be done in a way where the tribe is in control of the sports, and the state is able to share with some generous revenue payments," DeSantis said.

The governor said he hopes sports betting will go live before professional football games kick off this fall.

"We are looking at this thing being hopefully operational by the summer. I think everyone wants it before football season, so that is going to be the goal," he said. "The tribe can monetize that. The state will be able to monetize part of that. We also just trust the tribe to be the ones doing this, rather than stuff that is offshore and all these other things. So, we think it brings a level of protection to the consumer."

Shortly after the deal was signed, House Speaker Chris Sprowls, R-Palm Harbor, and Senate President Wilton Simpson, R-Trilby, announced that lawmakers will hold a special session during the week of May 17 to consider the proposed compact. This year’s regular session is scheduled to end April 30, and the legislative leaders said holding a special session will provide more time to study the deal.

Pari-mutuel operators, professional sports leagues and gambling fans in recent years have pushed lawmakers to authorize sports betting in Florida, the nation’s third most-populous state and a tourist destination for tens of millions of visitors a year.

The sports-betting arrangement in the proposed compact is aimed at complying with a 2018 constitutional amendment, known as Amendment 3, that requires statewide voter approval for future expansions of gambling.

"At the end of the day, this is operated by the tribe. It’s operated on tribal lands. I think it satisfies Amendment 3. If somebody wants to try to contest that, both the tribe and the state will be vigorously defending the agreement that we have made here today," DeSantis told reporters Friday.

But John Sowinski, the campaign manager of the political committee behind the amendment, said sports betting and several other provisions in the proposed compact, which would allow the Seminoles to add craps and roulette to their current casino operations, run afoul of the Constitution.

The amendment, which was approved by 71 percent of Florida voters, "requires voter approval for any new casino gambling," Sowinski said Friday in a prepared statement.

"That includes sports gambling, player designated games, craps, roulette, moving slot machine permits, and any other form of Class III gambling," he said, referring to federal law classifications of tribal gaming. "The proposed compact violates the letter and spirit of Amendment 3. We call on the governor and our legislators to honor the will of the people, who demanded that any new casino gambling authorization occur at the ballot box, not behind closed doors in Tallahassee."

The potential deal comes after years of state and tribal leaders being unable to reach an agreement. Pari-mutuels are an important factor in the discussions, as they have operated for decades across the state and have large financial stakes in any changes to gambling laws.

The proposed compact addresses controversial "designated player" games underway at many pari-mutuel card rooms. Those games have been a major sticking point in previous attempts at sealing a deal.

Siding with the Seminoles, a federal judge in 2016 ruled that the card games violated a 2010 compact, which gave the tribe "exclusivity" over operating banked card games, such as blackjack. Under a settlement with former Gov. Rick Scott, the tribe continued to pay about $350 million a year to the state. But in 2019, the Seminoles made good on threats and quit the longstanding revenue-sharing agreement.

The compact signed Friday would recognize that designated player games do not breach the tribe’s exclusivity but would constrain the card games to their current footprint and would not accommodate any significant expansion of the games.

During the special session, lawmakers also are expected to consider creating a gaming oversight commission. Osceola said the proposed compact and the proposed gaming commission are an attempt to "rectify the situation" with the card games "to make sure that we don’t have an issue" in the future.

The agreement finalized Friday also would allow the Seminoles to add three additional facilities to their Hard Rock casino in Hollywood and permit the tribe to contract with a third party --- such as Las Vegas casino giants MGM, Sands or Caesars --- to operate the resort.

While DeSantis and Osceola touted the proposed compact Friday, getting state lawmakers’ approval of the deal, the gaming commission and other pari-mutuel-related legislation could be a heavy lift.

Simpson, who has worked closely with the tribe for years but failed to gain DeSantis’ approval on a proposed compact in 2019, told reporters Friday that having the formal deal with the tribe was a positive starting point for the Legislature.