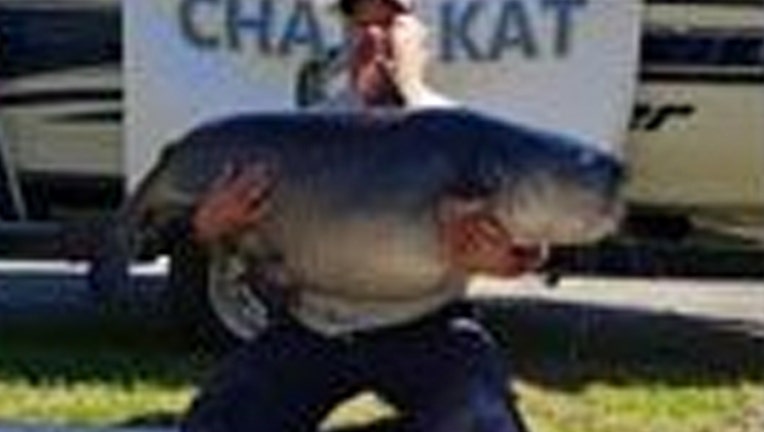 It's no easy feat to wrangle an 111-pound fish.

A Florida man set a new state record in Georgia after reeling in a massive Blue Catfish on the Chattahoochee River. The fish officially weighed in at 110 lbs., 6 oz. and measured out to 58-inches long and had a 42-inch girth.

The Georgia Wildlife Resources Division announced the new record on its Facebook page, congratulating Tim Trone from Havana, Fla. The post shows several photos of Trone with his catch, including one where he’s holding the massive fish in both of his arms.

On his own Facebook page, Trone wrote, “Holding that fish in my arms was hell. It took 3 of us to get that fish in that position. I only held it for a few seconds. About killed my back.”

He also described how, when he first caught the fish, he weighed it on a “non-certified scale,” which said that it weighed 151-152 lbs. When he used a certified scale, however, it showed 111 lbs.

“I'm as baffled as a lot are,” he wrote. “How can two scales be off by 40 lbs.?” When the fish was taken to the Georgia DNR, it was certified at 110 lbs., 6 oz. While it wasn’t as heavy as Trone initially believed, the fish was still big enough to take the state record in Georgia.

The angler discussed his catch with Georgia Outdoor News, saying that when he first felt the fish on his line, it felt “like a big turtle.” He said it reeled up “like a 100-lb. floating log, no fight.” When he first saw the fish, he said he thought it was only about 50 lbs.

“When I reeled her closer to the boat, I was like, ‘Oh my gosh! What is this?’” he told Georgia Outdoor News. “I got her by the boat and thought to myself, ‘How am I going to get this fish in the boat?’"

He continued, “All I remember is putting my hand in the gill and the next thing I remember I was standing over that fish looking at it in the bottom of the boat. I don’t remember pulling her over the side or putting her in the floorboard or nothing.”