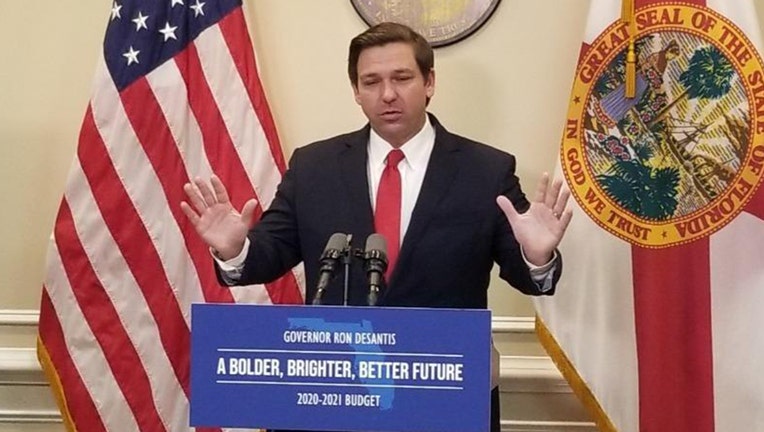 TALLAHASSEE, Fla. - Arguing that the case raises a "political" question, attorneys for the state say a circuit judge should dismiss a lawsuit challenging moves by Gov. Ron DeSantis and his administration that seek to prevent school districts from requiring students to wear masks.

The attorneys for DeSantis, the State Board of Education, the state Department of Education and Education Commissioner Richard Corcoran filed a 38-page motion Monday urging Leon County Circuit Judge John Cooper to toss out the case filed by parents from various parts of Florida amid a surge in COVID-19 infections.

Cooper has scheduled a hearing Thursday on the motion. The attorneys for the state contend, in part, that an executive order issued by DeSantis and an associated rule are policy decisions and that rejecting them would violate the constitutional separation of power between the executive branch and the judiciary.

"The executive order and the rule were implemented after balancing the legitimate state interests of school safety and parental rights," the motion said. "Although plaintiffs may disagree with the governor’s policy decision, the court lacks the authority to elevate plaintiffs’ policy decision and impose it upon the entire state. The governor, as the public official duly elected by the majority of the citizens of the state of Florida, was entrusted with the sole authority to make such statewide policy determinations --- not the parent plaintiffs and not a court."

MORE NEWS: Florida Board of Education to discuss school districts that require students to wear masks

As part of the argument, the attorneys for the state cited a 1st District Court of Appeal ruling last year that rejected a lawsuit spearheaded by the Florida Education Association teachers union. That lawsuit challenged an order by Corcoran aimed at requiring schools to reopen campuses amid the pandemic.

The lawsuit over masks in schools and last year’s case about reopening schools both alleged that the state violated part of the Florida Constitution requiring the provision of a "uniform, efficient, safe, secure and high quality system" of public schools.

"The First District Court of Appeal has already concluded that whether a school policy regarding precautions during a pandemic is "safe" and "secure" is a political question that lacks a judicially manageable standard and relies upon policy determinations that should be left to the executive branch," Monday’s motion said. "Plaintiffs’ claims (in the mask case) similarly present a non-justiciable political question and therefore must be dismissed."

The parents filed the lawsuit this month amid a fierce debate throughout the state about whether children should be required to wear masks in schools. The debate has been fueled by a spike in COVID-19 cases and hospitalizations because of the highly contagious delta variant of the coronavirus.

The lawsuit contends, in part, that preventing school districts from requiring masks threatens safety in schools.

"The Florida Constitution requires that state entities and public officials, who are charged with overseeing the funding and operations of public education, ensure that Florida’s schools operate safely," the lawsuit said. "Defendants cannot legally deny students, public school staff, their family members and the public with whom they come in contact within the public school system their basic human needs for health and safety."

DeSantis issued the executive order July 30 and tied the mask issue to a new state law known as the "Parents’ Bill of Rights," which deals with the rights of parents to make health-care and education decisions for their children.

Carrying out DeSantis’ direction, the Florida Department of Health issued a rule that, in part, allows parents to choose for their students not to wear masks, a move known as an "opt out." The State Board of Education was scheduled late Tuesday afternoon to hold an emergency meeting to discuss whether the Alachua County and Broward County school districts were properly complying with the rule.

In addition to the issue of the constitutional requirement for safe and secure schools, the lawsuit also alleges that DeSantis’ executive order violates constitutional home-rule powers of school boards.

"As such, local school boards, elected by local citizens, have the power to operate, control and supervise public schools in the district under home rule powers," the lawsuit, filed by eight attorneys from Hillsborough and Pinellas counties, said. "Plaintiffs seek a declaratory judgment determining that the state government defendants have failed to abide by the requirements of the Florida Constitution by enacting the executive order that precludes county school boards from enacting mandatory masking."

But in the motion to dismiss Monday, attorneys for the state argued that the plaintiffs lack legal standing. In part, the motion said only school districts would have standing to make allegations about infringement on home rule.

"No school district has raised such a suit because the law is clear that the Florida Constitution delineates a hierarchical structure between the State Board of Education and the local school districts, and the executive order and rule appropriately leverage the constitutional authority granted to the State Board of Education," attorneys from the firm Abel Bean Law wrote in the state’s motion.