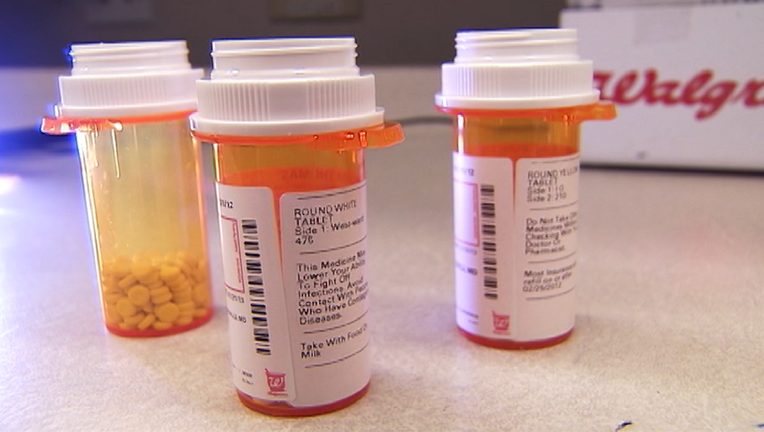 TALLAHASSEE, Fla. - Florida’s quest to start importing drugs from Canada got a boost Wednesday when the Trump administration announced it is moving ahead with a new rule and guidelines that could eventually allow the state to import prescription drugs to use in government-run programs.

The proposed rule would apply to several states seeking approval from the federal government, but the decision by U.S. Health and Human Services Secretary Alex Azar to appear alongside Gov. Ron DeSantis to announce the move emphasized the importance drug pricing could play in President Donald Trump’s newly adopted home state.

DeSantis, who is a strong ally of Trump, has touted the importation plan as a way to help drive down drug costs. DeSantis pushed a bill through the Legislature this spring that gave him permission to seek approval from the federal government.

But it’s not clear when the drug importation plan will be up and running. Neither Azar nor DeSantis could say when the proposed rule to carry out the program could take effect.  Regardless, they trumpeted the announcement as a significant step.

“For the career officials at the FDA (Food and Drug Administration) to be willing to say, ‘We believe there is an approach that could connect the Canadian and American systems together, with safe importation of drugs through this business to business type approach’ is a very historic day.” Azar said.

Though publishing rules is generally a procedural move, Florida is a critical state in Trump’s’ 2020 re-election bid. Azar denied that the Florida appearance, which came on the same day the U.S. House of Representatives debated impeachment of Trump, was political.

DeSantis has repeatedly said he has the ear of Trump, who announced this year he was moving his residence from New York to Florida, on the drug-importation issue.

The Trump administration announced in July it planned to move ahead with policies that would allow Florida to pursue the Canadian program and an “international” program that Florida residents could utilize.

The Canadian drug-importation program is allowed under the federal 2003 Medicare Modernization Act. While Azar and DeSantis could not say how long the rulemaking process would take, Azar said the public has 75 days to review and comment on the proposal.

“Unlike some rulemaking that may stretch on for several years, we remain optimistic that we could see this in a year or so,” she said.

Aside from rulemaking, other things must occur for the importation program to start operating, including Canada agreeing to work with Florida. Canada currently negotiates with drug companies to cover the costs of medicines for Canadians only.

Moreover, the Legislature needs to provide nearly $20 million to the Agency for Health Care Administration to hire a contractor that would help it implement the program. The Legislature will consider that budget request when it meets during the 2020 session, which begins in January.

DeSantis downplayed the hurdles, though.

“This is one step. It’s an important step. We’ve got a way to go, but I would much rather be here moving forward than just being on the sidelines chirping, saying, ‘Why doesn’t somebody do something about it?’ At least we are doing something,” DeSantis said.

The first step was taken during the 2019 legislative session when, over intense lobbying efforts from the pharmaceutical industry, lawmakers passed a bill that authorized the two drug-importation programs.

The Canadian program, which is slated to be administered by AHCA, would help meet the state’s prescription-drug needs in programs such as Medicaid and prison health care.

The other “international” program for consumers is expected to be administered by the state Department of Business and Professional Regulation. In addition to announcing the proposed rule to make the Canadian program a reality, Azar said the Trump administration is issuing guidance on the international program.

Azar, a former pharmaceutical executive, once criticized importation programs as a “gimmick,” but on Wednesday he downplayed those previous comments.

“We believe this creates an opportunity for a business-to-business connectivity between the Canadian and the American systems. That wasn’t there in 2003 when the legislation was passed, and it wasn’t there in 2004,” he said. “Frankly, we hadn’t examined it as closely until recently, at the governor’s and the president’s urgings.”

State House Speaker Jose Oliva, who played a key role in getting the legislation passed this spring, praised Trump and DeSantis for their roles on the issue.

Oliva, R-Miami Lakes, said implementing the law that authorized the program and the rules “seemed until today to be an immovable object. Our challenge now is to keep it moving and I have no doubt, under the leadership of President Trump and Governor DeSantis, we will do just that.”

Meanwhile, the Pharmaceutical Research and Manufacturers of America, a powerful industry group known as PhRMA, issued a statement saying it is reviewing the details of the proposed rule and guidance and blasted the Trump administration.

“At a time when there are pragmatic policy solutions being considered to lower costs for seniors at the pharmacy counter and increase competition in the market, it is disappointing the administration once again put politics over patients,”  PhRMA President and CEO Stephen J. Ubl said in a prepared statement. “The administration chose to proceed with an importation scheme that could endanger American lives, could worsen the opioid crisis and has been called unworkable by Canadian officials. Instead, they could have worked with stakeholders to develop and advance meaningful solutions that would directly benefit patients. We are reviewing the details of the proposed rule and draft guidance and will be providing the administration with our comments and concerns with the hope that no patients are endangered by this political maneuver.”