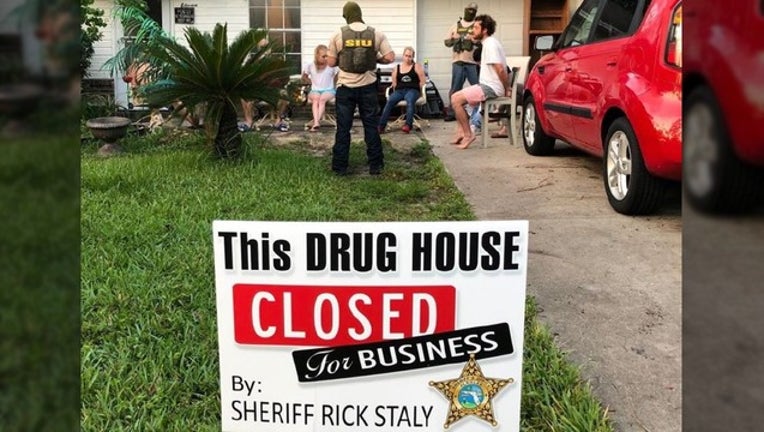 PALM COAST, Fla. (FOX 35 ORLANDO) - A drug house in Palm Coast has been shut down by the Flagler County Sheriff's Office.

According to the Flagler County Sheriff's Office, their Special Investigations Unit teamed up with their tactical team and the United States Secret Service to shut down a drug house in Palm Coast.

They said they served a search warrant to the home on 11 Raemoor Drive. The warrant was obtained after an investigation into narcotics activity at the property. Detectives located prescription pills, Methamphetamine, Fentanyl, needles, smoking pipes with cannabis residue, and drug paraphernalia.

At the start of their search, detectives said that one suspect attempted to flush narcotics and paraphernalia down the toilet. Five suspects total were located inside the residence and arrested. Those five were:

Several printers and computers were reportedly also seized from the property, as they were suspected of being used to print counterfeit U.S. currency. This part of the investigation is being done by the United States Secret Service.

“This is another great example of people in the community seeing activity that didn’t look right and reporting it to law enforcement and then working with our federal partners,” Sheriff Rick Staly said. “Now we have five more drug offenders off the streets. If you see something, say something. Call us or send a tip to TIPS@flaglersheriff.com. We will look in to it”

The Flagler County Sheriff's Office said that the owner of the residence was on scene at the time of the search warrant and told deputies that he will start the eviction process on anyone currently living at the residence who does not leave freely.