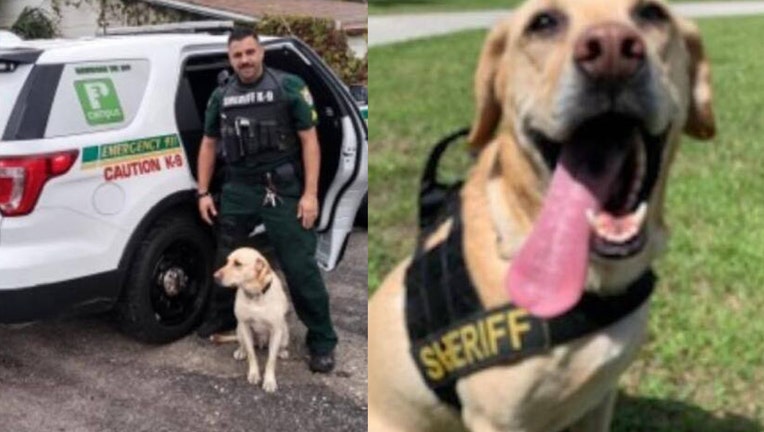 BREVARD COUNTY, Fla. - The Brevard County Sheriff's Office had to say goodbye to one of their own this week: their beloved K-9 Sonic.

"All of our hearts are broken today as we share with the community the loss of one of our team members, 'K-9 Sonic' who was assigned to Corporal Kirk Geweniger of our School Security Team!!" Sheriff Wayne Ivey wrote on Facebook.

Sonic passed away unexpectedly from injuries he suffered in a crash in 2017. Geweniger was also injured in the accident.

The vehicle the officers were riding in was reportedly rear-ended by a driver who was Driving Under the Influence, according to the sheriff's office. They said the injuries Sonic sustained continued to manifest in spite of regular treatments to rehabilitate them.

"With no chance of recovery and his quality of life being diminished, Dr. Chosa and our team made the very difficult decision to medically lay him to rest with Kirk and other members of our agency by his side until he peacefully passed away."

Sonic was the very first law enforcement K-9 assigned full-time to serve students and staff members in Brevard County Schools. Throughout his time with the force, he helped serve over 75,000 students, 9,000 teachers, faculty and volunteers and helped keep watch over 100 public, charter and private schools.

In 2018, Sonic and Cpl. Geweniger were named “Law Enforcement Partners of the Year” during the Central Florida Crimeline Annual Awards Ceremony because of their hard work and dedication.

"Well done my good and faithful servant. We will take it from here!!"