Those who have returned to damaged homes and businesses after Hurricane Ian are figuring out the best way to rebuild.

FORT MYERS, Fla. - In darkness and despair, there were flickers of light and hope, even for Jane Compton who lost her home and possessions to Hurricane Ian’s wrath. As the storm approached last week, she and her husband found sanctuary at their Baptist church, huddling with fellow parishioners through wind, rain and worry.

They prayed for the gusts to subside and for God to keep them from harm as the hurricane made landfall last Wednesday. Floodwaters swept under the pews, driving the congregation to the pulpit and further testing their faith. The intensifying storm ripped the church's steeple away, leaving a large gap in the roof. The parishioners shuddered.

"Good Lord, please protect us," Compton prayed, with her husband, Del, at her side.

She compared the deluge to the biblical story Noah's Ark, saying they had no idea when the water would stop rising. When it did, there were hallelujahs.

With the storm now passed and its devastation abounding, churches across hard-hit Southwest Florida are providing a steadying force in the lives of those plunged into chaos and grief. Heartache, frustration and uncertainty now swirl in sanctuaries amid sermons about perseverance and holding on to one’s faith.

"We believe this was a blessing in disguise," said the Rev. Robert Kasten, the Comptons' pastor at Southwest Baptist Church, a congregation of several hundred in one of the most devastated neighborhoods of Fort Myers. 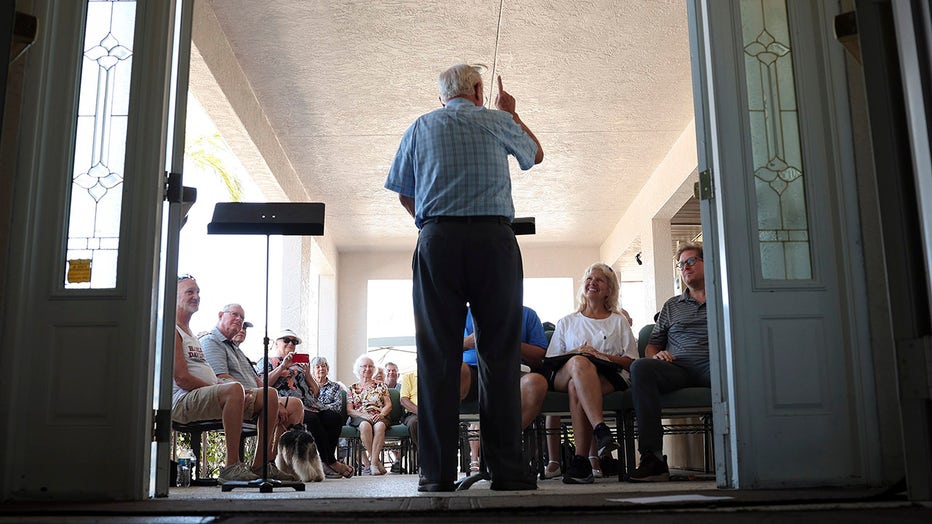 Pastor Bob Kasten delivers his sermon during Sunday services outside the Southwest Baptist Church which was damaged during Hurricane Ian on October 2, 2022 in Fort Myers, Florida. (Photo by Win McNamee/Getty Images)

Also being tested are many of the nearly quarter million Catholics in the Diocese of Venice, which encompasses 10 counties from just south of Tampa Bay to the Everglades that bore the brunt of the hurricane. Bishop Frank Dewane has been visiting as many of the diocese's five dozen parishes and 15 schools as possible.

"A lot of people just wanted to talk about, ‘Why is there this much suffering?’" Dewane said of parishioners he met as he celebrated weekend Mass in a church in an inundated North Port neighborhood and in the parish hall of a storm-damaged Sarasota church. "We have to go on; we’re a people of hope."

Priests walked a fine line between holding Mass to provide comfort and not endangering older parishioners in areas with widespread lack of running water and electricity and flooded roadways. Dewane said one rescued man had kept asking about his wife, not realizing she had drowned in the storm.

Around Kasten’s church, nearby mobile home parks where many of his parishioners lived became submerged. About a fourth of his congregation suffered major damage to their dwellings, with many like the Comptons losing nearly everything. The church’s sanctuary has become temporary quarters for nearly a dozen of the newly homeless.

Most were handling things well, until the realities of tragedy hit.

"When they saw pictures, they just burst into tears," Kasten said.

"Just the shock of knowing and seeing what you knew happened, it overwhelmed them. But they are just praising the Lord how he protected us, kept us safe," he said.

Barbara Wasko, a retiree who is now sleeping on a lounge chair in the sanctuary, said she has faith the community will rebuild.

RELATED: Frostproof church surrounded by storm water in the aftermath of Hurricane Ian 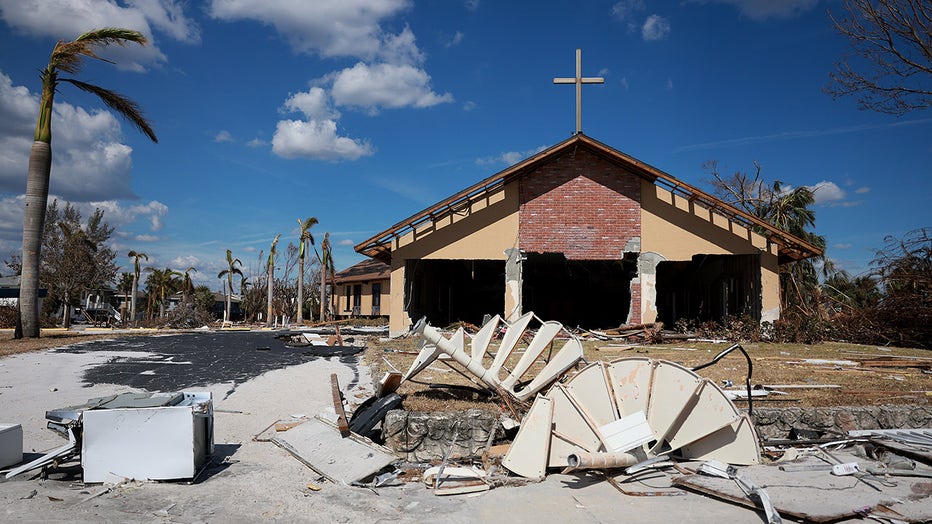 A destroyed church is seen after hurricane Ian passed through the area on October 3, 2022 in Fort Myers Beach, Florida. (Photo by Joe Raedle/Getty Images)

Hurricane Ian’s fury — 150 mph (241 kph) winds and deluges of water — killed dozens of people and stranded countless in what for many communities has been their worst calamity in generations.

Rhonda Mitchell, who lives near the Baptist church, said all she had left was her faith in God.

"We don’t know what He is going to do," she said, her belongings splayed to dry outside her mobile home as an empty U-Haul truck waited to be loaded.

"I just lost my whole life," she said, beginning to sob. "I’m still here but I just lost everything I own. ... I’m just trying to figure things out."

At badly damaged Catholic churches and schools, reconstruction work is already underway. But Dewane said his priority is to "meet people where they are" and ensure the Catholic community can help overall relief efforts.

That ranges from finding shelter for teachers whose homes were leveled even as many schools are re-opening this week to helping counsel elderly neighbors. The diocese is working with Catholic Charities to set up distribution centers for donations as well as supplies provided by FEMA. 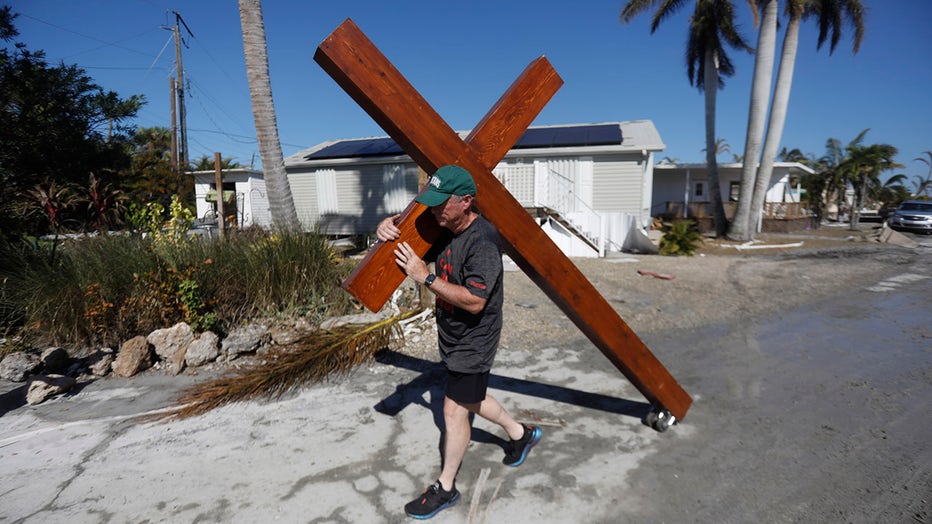 Dan Beazley of Michigan carries a large wooden cross in the Nancy Lane mobile home park on San Carlos Island where they sustained significant damage from Hurricane Ian that ravaged the Fort Myers area, Florida, on Friday, September 30, 2022. (The Was

But many successful efforts are grassroots. When a group of nuns in small Wauchula, an inland town, lost power, they decided to just empty out their freezers of meat and other perishables, and invite the entire neighborhood for a barbeque. The fire blazing, hundreds of people lined up and started adding what they had in their own rapidly warming fridges.

"We’re doing as well as we can," Dewane said. "I think we can only be the Lord’s instruments."

The Rev. Charles Cannon, pastor at St. Hilary’s Episcopal Church, sermonized about the temporariness of the community’s losses. While much was lost, he said, not all is gone.

Cannon pointed out that the debris that left church grounds looking like an ugly, unearthly place can be cleaned.

"Most of the work has been to get the people feeling safe again," he said, "Almost everybody has been without power. All of them without water. Trying hard to get them feeling comfortable again." 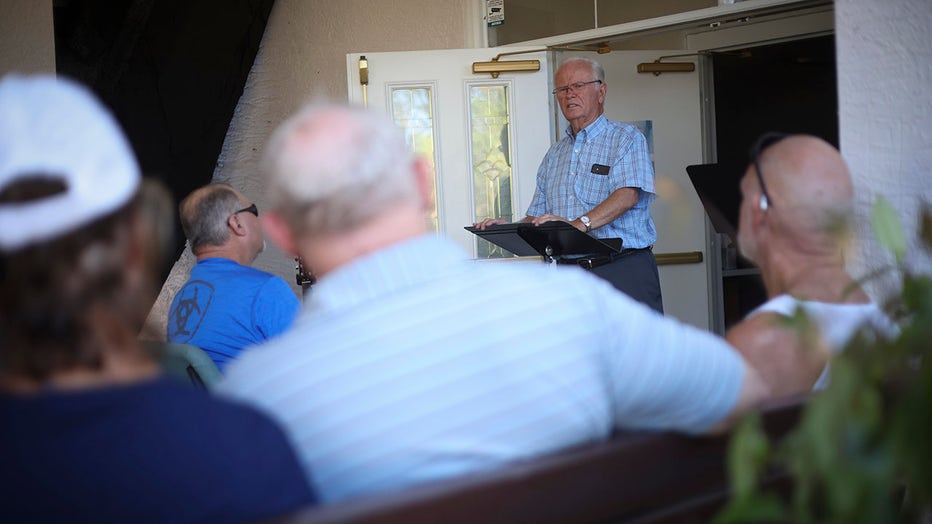 Down the street, about 50 parishioners at the Assembly of God Bethlehem Ministry gathered to share in their hardships. They recounted how they had no electricity, no drinkable running water and, in many cases, were left with damaged homes.

"But God has kept them safe," said Victoria Araujo, a parishioner and occasional Sunday school teacher.

"Some people lost a lot of things ... We need to pray for the people who lost more than us," said the Rev. Ailton da Silva, whose congregants are mostly immigrant families from Brazil.

The storm has truly tested his community’s resiliency, he said, adding that "I think people will think about faith, family and God."

Five years ago, Hurricane Irma swept through the region, causing extensive damage to his church. Repairs were still ongoing when Ian hit. The church fared much better this time.

Deputies pull US flag from swollen river in Florida