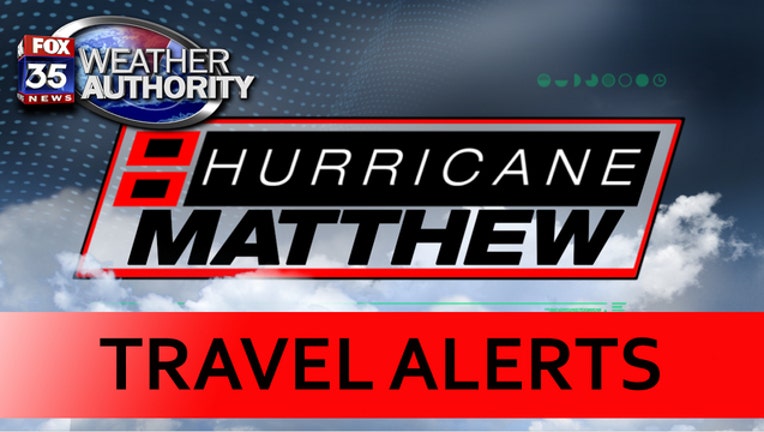 According to Houston-based FlightAware.com, airlines canceled 1,594 flights for Wednesday through Friday because of Hurricane Matthew.

It says 124 flights were canceled in the U.S., Bahamas and Haiti on Wednesday due to the storm. The most affected airports were Miami (51 flights) and Nassau, Bahamas (43 flights). It says American Airlines canceled the most flights: 63.

The website says 1,070 flights have already been canceled in the United States for Thursday. The most-affected airports are Miami, with 512 flights, and Fort Lauderdale, Florida, with 287. American, with 477 flights, and Southwest, with 145 flights, led in cancellations.

For Friday, FlightAware says 400 U.S. flights have been canceled. Southwest canceled the most, 268 flights. The airport in Orlando, Florida, was the most affected by Friday cancelations, with 253 flights.

FlightAware says it expects the number of cancelations to rise.

FOX 35 is monitoring announcements for any flight cancelations or traffic alerts as related to road conditions and evacuations.  Any updates will be posted here.  Scroll down to find information about one of Central Florida's four major airports.

We will also post any important bulletins about major roads.  Right now, all tolls have been suspended on State Road 528 (The Beachline Expressway).

SUNRAIL: Due to Hurricane Matthew, the Florida Department of Transportation is suspending SunRail commuter rail service Thursday afternoon.  The last southbound train (P317) departs DeBary at 12:00 p.m., and the last northbound train (P318) departs Sand Lake at 1:15 p.m. This will allow staff time to prepare for the impending storm.

ORLANDO INTERNATIONAL AIRPORT:  If you have any flights departing or arriving,  please contact your airline directly for specific flight details.  Officials anticipate that flights scheduled for late Thursday and into Friday morning will be canceled.

Passengers should not come to the Airport until commercial flight operations resume. The Airport is not a shelter.

Commercial flight activity will resume as soon as possible and will be announced accordingly. Passengers should check the airlines' websites for specific flight details.  For airline contact information please visit www.OrlandoSanfordAirport.com

ORLANDO MELBOURNE INTERNATIONAL AIRPORT:  Orlando Melbourne International Airport commercial flights will stop at approximately 6 p.m. Thursday, Oct. 6, due to Hurricane Matthew.  The terminal will close at approximately the same time, after last commercial flight (Delta Flight 2195). Authorities are reminding travelers that the airport is not a shelter of last resort. Closest shelter is at Meadowlane Intermediate, at 2700 Wingate Blvd, West Melbourne.