KEIGHLEY, England - A large fire on Thursday destroyed a 19th-century mill in England, which has been featured in "Peaky Blinders," "Downton Abbey" and other television shows and films.

The flames broke out around 12 p.m. local time at Dalton Mills, an old textile factory located in the town of Keighley in England’s West Yorkshire, the West Yorkshire Fire and Rescue Service said.

"We currently have fire engines & specialist units in attendance at a fire at Dalton Mills, Keighley. There is a lot of smoke in the area & residents are advised to keep doors/windows closed," officials said in one statement.

A later update added: "We have 20+ appliances in attendance at a fire in Dalton Mill in Keighley. 100% of building involved in fire." 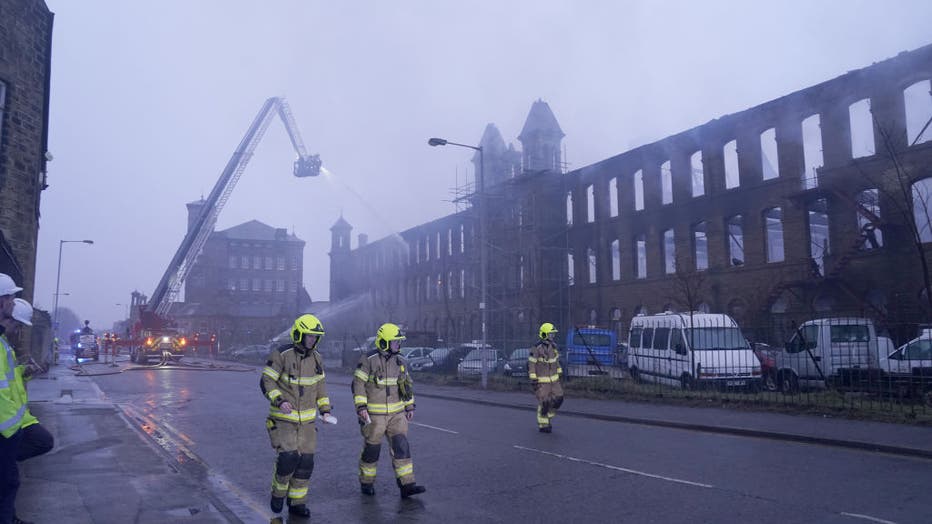 Firefighters tackling a blaze at Dalton Mills, Keighley, which was used as a filming location for Peaky Blinders and Downton Abbey. Picture date: Thursday, March 3, 2022. (Photo by Danny Lawson/PA Images via Getty Images)

The historic Dalton Mills was built in 1869 and once employed over 2,000 workers during its heyday, according to history from Screen Yorkshire, which invests in local productions. In recent years, the complex’s large spaces and historic features have lured many film and TV makers seeking a more industrial backdrop for period dramas.

"Peaky Blinders" season one, "Downtown Abbey," "The Great Train Robbery," "Gunpowder" and "To Walk Invisible" are among the productions that have shot at the site in recent years.

Video from the scene on Thursday showed flames pouring out of the building.

The cause of the fire was unclear. No injuries were immediately reported, according to the BBC.

"Internally the building has collapsed, the floor and the roof," Nick Smith from West Yorkshire Fire and Rescue Service told the news outlet.

Richard Knight with Screen Yorkshire, described the fire as "a sad loss to the Yorkshire filmmaking landscape".

"It's one of those amazing locations that is like a destination in its own right," Knight told the BBC. "It's got the kind of provenance and scale that could attract filmmakers from far and wide."

Knight added that part of the site had once been transformed into London’s Victorian-era East End for the 2016 film "The Limehouse Golem," starring Bill Nighy.