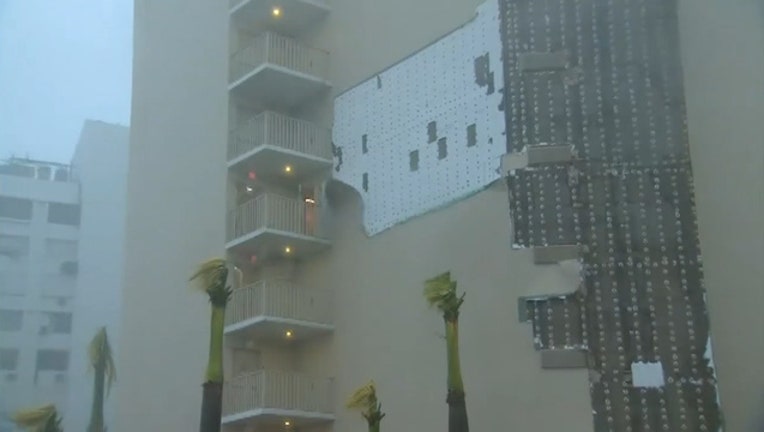 WASHINGTON (AP) - The U.S. ramped up its response Monday to the humanitarian crisis in Puerto Rico while the Trump administration sought to blunt criticism that its response to Hurricane Maria has fallen short of it efforts in Texas and Florida after the recent hurricanes there.

Five days after the Category 4 storm slammed into Puerto Rico, many of the more than 3.4 million U.S. citizens in the territory were still without adequate food, water and fuel. Flights off the island were infrequent, communications were spotty and roads were clogged with debris. Officials said electrical power may not be fully restored for more than a month.

In Washington, officials said no armada of U.S. Navy ships was headed to the island because supplies could be carried in more efficiently by plane. The Trump administration ruled out temporarily setting aside federal restrictions on foreign ships' transportation of cargo, saying it wasn't needed. The government had waived those rules in Florida and Texas until last week.

Though the administration said the focus on aid was strong, when two Cabinet secretaries spoke at a conference on another subject - including Energy Secretary Rick Perry, whose agency is helping restore the island's power - neither made any mention of Puerto Rico or Hurricane Maria.

Democratic lawmakers with large Puerto Rican constituencies back on the mainland characterized the response so far as too little and too slow. The confirmed toll from Maria jumped to at least 49 on Monday, including 16 dead in Puerto Rico.

"Puerto Ricans are Americans," said Rep. Nydia Velazquez, D-N.Y., who traveled to Puerto Rico over the weekend to assess the damage. "We cannot and will not turn our backs on them."

President Donald Trump himself was expected at the end of last week to visit Puerto Rico and the U.S. Virgin Islands, after they had been ravaged by Hurricane Irma. But the trip was delayed after Maria set its sights on the islands.

Trump said during an appearance in New York last week that Puerto Rico was "absolutely obliterated" and in "very tough shape." But over the weekend he made no mention of the ongoing humanitarian difficulties as he tweeted criticisms of NFL football players for their protests during the National Anthem.

The head of the Federal Emergency Management Agency, Brock Long, and White House homeland security adviser Tom Bossert landed in San Juan on Monday, appearing with Puerto Rico Gov. Ricardo Rossello at a brief news briefing. Though Rossello had urgently called for more emergency assistance over the weekend, he expressed his gratitude for the help so far.

The governor said the presence of Long and Bossert was "a clear indication that the administration is committed with Puerto Rico's recovery process."

Long said, "We've got a lot of work to do. We realize that."

White House spokeswoman Sarah Huckabee Sanders denied the president was distracted from Puerto Rico or other pressing matters. She said the federal response has "been anything but slow," adding that "there's been an unprecedented push through of billions of dollars in federal assistance that the administration has fought for."

Perry and Interior Secretary Ryan Zinke made no mention of Puerto Rico or the hurricane during a joint appearance before the National Petroleum Council, a business-friendly federal advisory committee. News reporters were not allowed to ask questions.

Perry had traveled with Trump to Texas and Florida following hurricanes Harvey and Irma.

Zinke's department oversees the U.S. Virgin Islands, along with other territories.

The federal response to Maria faces obvious logistical challenges beyond those in Texas or Florida. Supplies must be delivered by air or sea, rather than with convoys of trucks.

FEMA said it had more than 700 staff on the ground in Puerto Rico and the U.S. Virgin Islands. They were helping coordinate a federal response that now includes more than 10,000 federal personnel spread across the two Caribbean archipelagos.

In Puerto Rico, federal workers supplied diesel to fuel generators at hospitals and delivered desperately needed food and water to hard-hit communities across the island. Cargo flights are bringing in additional supplies, and barges loaded with more goods are starting to arrive in the island's ports.

San Juan's international airport handled nearly 100 arrivals and departures on Sunday, including military and relief operations, according to the Federal Aviation Administration. The Pentagon dispatched the Navy amphibious assault ship USS Kearsarge, which provided helicopters and Marines to help with the relief effort onshore.

However, the Trump administration said Monday it would not waive federal restrictions on foreign ships' transportation of cargo as it had following Harvey and Irma. The administration said it will continue to enforce the Jones Act, which requires that goods transported between U.S. ports be carried on U.S.-flagged ships.

On Capitol Hill, congressional leaders were talking about how to pay for it all. Puerto Rico was already struggling from steep financial and economic challenges before Maria made landfall.

Lawmakers approved a $15 billion hurricane relief packaged after Harvey hit Texas, but billions more will likely now be needed to respond to Maria.

Ryan said Monday that Congress will ensure the people of Puerto Rico "have what they need."