The father of a special needs child with Down syndrome is speaking out, still fuming that his 7-year-old daughter came home from Ocean Breeze Elementary School with a mask tied around her head.

ORLANDO, Fla. - The father of a special needs child with Down syndrome is speaking out, still fuming that his 7-year-old daughter came home from Ocean Breeze Elementary School with a mask tied around her head.

"I was so angry so I waited four days from Thursday 7th to Tuesday after Columbus Day because I really need to calm down," said Jeff Steel.  "When this child got off the bus and had the mask it was tied around the back of her head underneath her ponytail and it was quite tight around her face."

He said it was so tight, his daughter Sophia struggled to communicate and breathe. 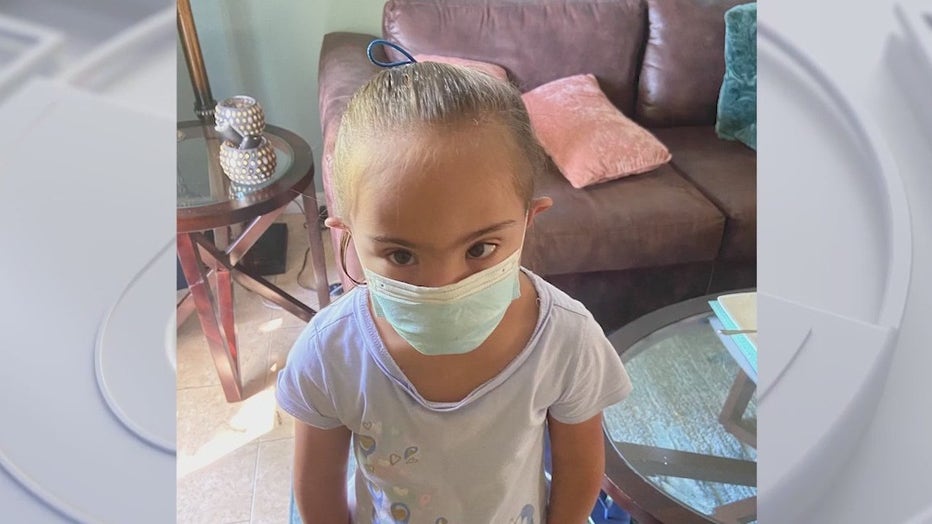 A Florida father of child with Down syndrome said mask was tied tightly around daughter's face without his consent.

The father said he always assumed Sophia was exempt from the mask mandate because of her disability.  He's furious no one from the school ever called him.

"Why in the world, since the mandate happened back in September and you were going to begin to put this on my child then tie it on my child, would you never pick up the phone and call me and ask me to give me my informed consent?" Steele asked.

State Representative Randy Fine, R-Palm Bay, weighed in on this mask situation earlier this week at a news conference with Governor Ron DeSantis.

"There’s a special place in hell for people who did this to that man’s daughter," Rep. Fine said.

Jenkins spoke to FOX 35 News this week about all the harassment she has been receiving since voting for the mandatory mask mandate.  She is angry Rep. Fine took at her in such a public manner.

Attorney General Merrick Garland on Thursday denied claims that the Justice Department would label parents as domestic terrorists when intervening in incidents of violence or intimidation targeting state and local school board officials. A Brevard County School Board member says she has been threatened.

"To watch a state rep say there’s a special place in hell for me on television is disturbing," Jenkins said.

Brevard Public Schools released a statement on the situation, which read, "The student was given a mask exemption as soon as the parents made the request to school leadership. The school district is investigating the allegations made by the family. BPS strives to ensure each student has the best educational experience possible and will continue in that effort."

School board emergency policy stated that if Brevard County reached a level of 50 COVID-19 cases per 100,000 people, Superintendent Dr. Mark Mullins would transition the mask mandate from having a medical exemption to having a parental opt-out.  Numbers released by the state on Friday reflected a drop in cases in the county to 50.1 cases per 100,000 people and that prompted the change, the district said.

"This is exactly how the temporary mask mandate was supposed to be used," said BPS School Board Chair Misty Belford. "The goal was to protect the health of our students and staff. Thank you to all our families and staff for working together to dramatically reduce the number of COVID cases."