The family of 18-year-old Timothy Simpkins says they cannot justify what he did but they believe he was trying to protect himself following ongoing incidents with other students.

ARLINGTON, Texas - The family of the Timberview High School student suspected in an on-campus shooting Wednesay said they hope a police investigation will reveal more about what led up to the incident. They claim he was being bullied.

"The decision he made, taking the gun, we are not justifying that. That was not right. But he was trying to protect himself. We hope the police department does the investigation properly," said Carol Harrison Lafayette, a family member.

He was released from Tarrant County jail Thursday afternoon after posting bond. He declined to answer reporters' questions while leaving. 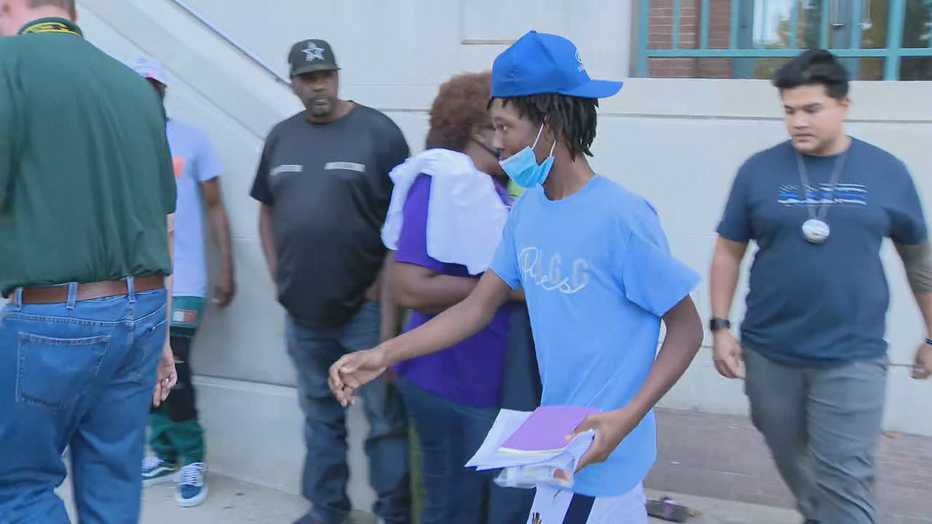 Around 9:15 a.m. Wednesday, police said Simpkins got into a fight with another student in a second-floor classroom and drew a weapon. Four people were hurt in the shooting.

The school immediately went on lockdown, but Simpkins got away in a Dodge Charger.

Police worked to secure the building and searched Simpkins home nearby. They recovered the alleged .45-caliber handgun he used in the street a few miles away.

Hours later, Simpkins turned himself in at a nearby police station with an attorney.

The alleged gunman’s family says they are not justifying him bringing a gun but hope the investigation will reveal more about the circumstances.

His family claims there are documented reports of ongoing incidents between him and other students. But at this point, neither Mansfield ISD nor the police department will confirm that.

"You know, that’s something that hopefully we’ll find out during our investigation," said Asst. Chief Kevin Kolbye with the Arlington Police Department.

Asst. Chief Kolbye said after Simpkins turned himself in with his attorney, he waived his right to make any statements. So, most of the case will be based on eye-witness testimony, video and physical evidence gathered at the scene.

He said detectives will be looking at any allegations of bullying and Simpkins’ school history. They will interview his teachers, as well as other students and parents.

"But I just want to stress that, you know, we don’t accept bullying and it’s the responsibility of the teachers to deal with some of those things in the Mansfield school district," Kolbye said. "But even if you’re bullied, there are other options besides carrying a gun into a school and using a gun in a situation like that. That’s just not acceptable today."

The family of the school shooting suspect said he was bullied. That's going to be part of the police investigation. Good Day talked to Arlington PD Asst. Chief Kevin Kolbye about the case and what police know so far.

The assistant chief also believes Mansfield ISD needs to re-evaluate some of its safety measures with the increasing number of campus threats and students carrying weapons.

"I can assure you that we’re doing a thorough intensive investigation as it relates to what transpired," added Donald Williams, the Mansfield ISD associate superintendent of communications.

Those hurt in the shooting include two students and two teachers. A 15-year-old boy was shot and critically injured. A teenage girl was grazed by a bullet, was treated, and released from the hospital. A 25-year-old teacher was shot but is expected to be okay. And a pregnant teacher was hurt in a fall but not hospitalized.

Simpkins family apologized to those who were hurt and asked for forgiveness.

"To the victims' family, there is no justification of anybody being hurt," Lafayette said.