A Universal Orlando actor who was dressed as movie character “Gru” has been fired for making an “OK” hand gesture that has been designated a hate symbol used by white supremacists in a photo with a biracial girl.

ORLANDO, Fla. - A family says a happy celebration with Universal Orlando employees was tainted with hate when one of the characters flashed a racist symbol in a photo.

“When you see this happen to your child in motion – it’s devastating. It’s very heartbreaking,” said Tiffiney Zinger.

Zinger says it happened back in March, during a character breakfast. Her two kids were taking photos with people in Minion costumes.In a video provided by the Zingers’ attorneys, you see the person dressed as Gru place his hand on Zinger’s 7-year-old daughter’s shoulder. Then he makes an “Okay” gesture, which has become a symbol of white supremacy.

“The whole thing is weighing on me,” Zinger said. “Basically, since I’ve seen that video – I’ve been emotionally distraught.”

Zinger said her family didn’t notice at the time.  Months later, when her daughter asked to share the photo for a project, the employee’s hand caught her eye. Zinger was forced to explain to the little girl with autism that something was wrong.

“I told them, ‘We cannot use this photo.’ She was like, ‘Why?’ I said, “Someone did something inappropriate the picture,” Zinger said.

Universal Orlando sent the News Station the following statement: “We never want our guests to experience what this family did.  This is not acceptable and we are sorry – and we are taking steps to make sure nothing like this happens again.  We can’t discuss specifics about this incident, but we can confirm that the actor no longer works here.  We have remained in contact with the family as we’ve worked with them to try and make this right.” 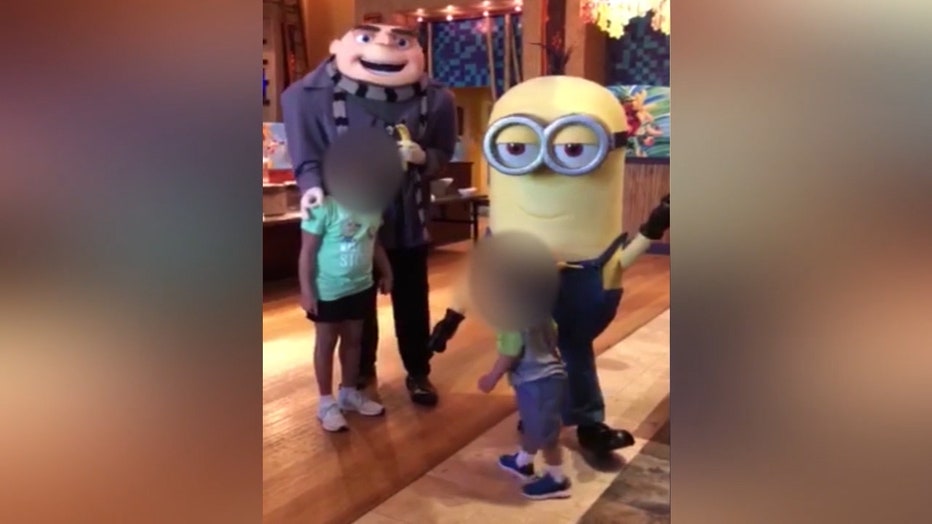 The Zingers have since hired attorneys and say they’re considering suing.

“I really believe that they should improve when it comes to supervising, training and hiring, because this should never happen to any child,” Zinger said.

The mom is also calling on Universal to release the identity of the employee.

“I think at this point, everyone would like to know…who is the person behind the mask,” she said.

The family lives in Central Florida and Colorado. They say they have Universal passes, but don’t know if they’ll ever return to the park.