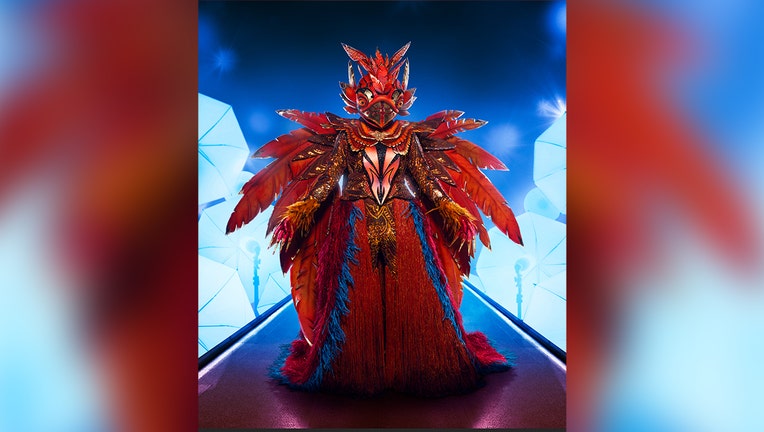 Ahead of the Season 5 premiere of “The Masked Singer” on March 10, get an exclusive first look at one of the fiery, all-new costumes: “the Phoenix.” (Source: FOX)

LOS ANGELES - Get fired up: America’s favorite musical competition series returns Wednesday, March 10 on FOX, and "The Masked Singer" is providing an exclusive first look at one of Season 5’s brilliant new costumes.

Lighting up the stage and rising from last season, meet "the Phoenix."

The Phoenix joins a scintillating lineup of creative and outlandish costume designs, including another transformative creature, "the Chameleon."

Fans are already sending in their guesses on who is behind the spectacular masks.

"I know It seems like far fetched But Like I said before The Chameleon For Season 5 of @MaskedSingerFOX reminds me of Elton John," one Twitter user wrote.

Similar to the previous season, the upcoming show will go on without an audience amid the COVID-19 pandemic.

The introduction of "the Phoenix" continues the fiery theme from last season’s winner: "the Sun."

During Season 4, "the Sun" outshined both "the Crocodile" and "the Mushroom" in a finale that brought together an all-star trio of serious talent.

Backstreet Boy Nick Carter was unmasked as "the Crocodile" while superstar recording artist Aloe Blacc was revealed to be "the Mushroom."

Singer, songwriter and actress Leann Rimes was revealed as "the Sun" after her unforgettable rendition of "Cuz I love you," by Lizzo.

efore being unmasked, Rimes reflected on her time on the show fighting for the Golden Mask trophy.

"The best part of this has been people being able to feel the essence of me without the preconceived idea of who or what I am," she told judges Ken Jeong, Jenny McCarthy, Nicole Scherzinger and Robin Thicke.

This station is owned by the FOX Corporation. This story was reported from Los Angeles.