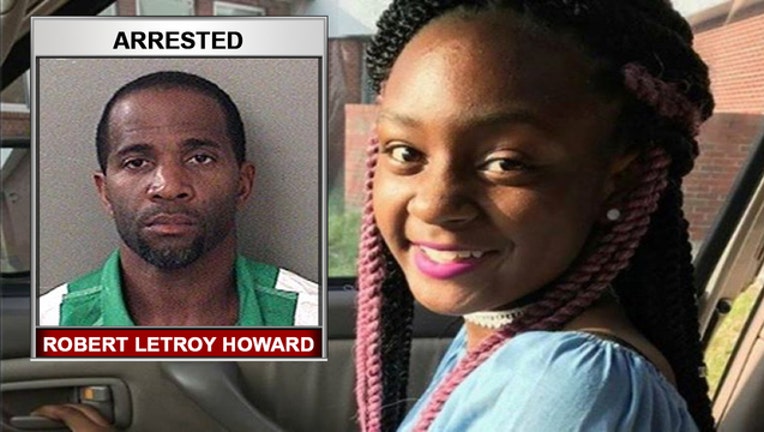 PENSACOLA (AP) - An ex-convict from Alabama was arrested early Thursday on charges of kidnapping, killing and disposing of the body of a 12-year-old Florida girl.

Escambia County Sheriff David Morgan said during a news conference that Robert Letroy Howard, 38, often "frequented" the apartment of his girlfriend in the Aspen Village apartment complex where Naomi Jones lived with her family near Pensacola.

The child was reported missing May 31, and her body was found by fishermen on Monday.

Investigators came into contact with Howard as they canvassed the neighborhood after Naomi was reported missing, Morgan said. He added that Howard gave authorities "false information" that he was in Alabama when the child disappeared.

According to Morgan, surveillance video captured Howard by the creek where Naomi's body was found.

Investigators put him under surveillance and took him into custody soon after.

Morgan said the girlfriend's apartment is "very close" to the Jones apartment and that he was known to the child.

The sheriff said in a news conference Wednesday the child may have been targeted by someone she had previously interacted with on social media. He would not elaborate on that statement on Thursday.

Records show Howard is from East Brewton, Alabama. He was convicted in 1999 on two counts of sexual assault and rape and served 15 years in an Alabama prison.

Howard's first appearance will be Friday and Assistant State Attorney Greg Marcille said his office will seek no bond. Howard is currently being held on $600,000 bond. Marcille said that his office will review the evidence, but likely will file first-degree murder charges and will possibly seek the death penalty.

Morgan declined to answer questions about how the girl was killed, saying he wouldn't comment on whether she was sexually assaulted or if she put up a fight before she died. He had said in the news conference on Wednesday that preliminary autopsy results indicated she was suffocated.

A vigil for the girl is planned for Thursday night in Pensacola.