The number of women in the trucking industry is growing. Since 2010, the amount of female truck drivers has increased immensely -- by 68 percent, according to a report in The Wall Street Journal. And equal pay for drivers, regardless of gender, is purportedly a big reason why the job has become more enticing to women.

Khadijah Lewis never thought she would be stepping into a job like this, but she's training to be a truck driver.

"I see that a lot more females are doing it nowadays, so that made me a lot more comfortable," she said.

Lewis is one of more than 230,000 female truckers on the roads right now. The number of women driving trucks is up 68 percent since 2010, according to American Trucking Associations. Lewis is one of four women in her class at Roadmaster Drivers School in Orlando.

"We kind of made our own little clique, like, 'Hey, girl power. We can do it. Let’s show the guys.'" 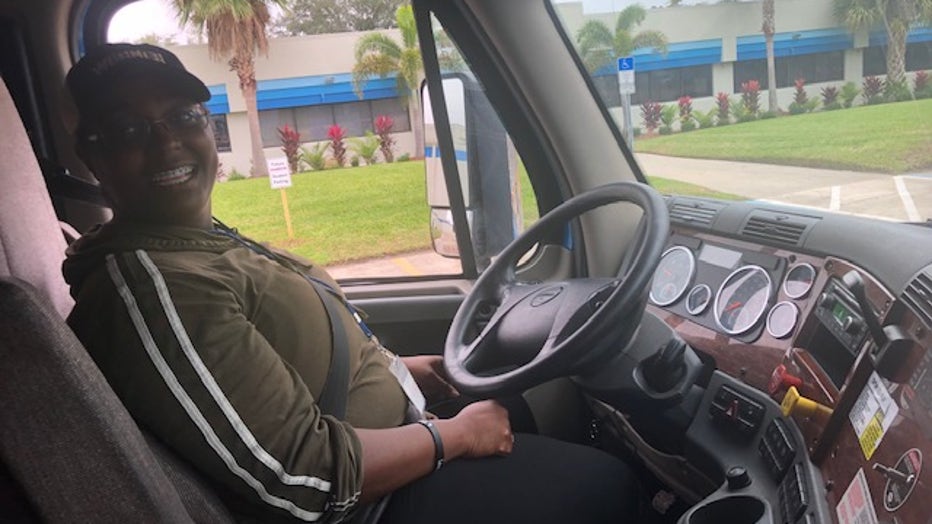 "Basically, everybody gets paid either as a new student or experienced driver, so there’s the same pay whether it’s female or male. It’s gender-neutral," said Roadmaster Drivers School Regional School Manager Edith Nieves.

The load or the mile typically dictates the pay, so it doesn't matter who's driving but how much they're driving.  Plus, the trucks are now mostly automatic.

"It was intimidating at first for them from what I was seeing," Nieves said. But now, "going from a 10-speed, double-clutching, all automatic trucks - super easy."

The trucks are huge, but the equipment and technology have changed so much over the last couple of years that now a woman of any size can manage them.

"A lot of girls had to get a booster seat to sit on because they couldn’t reach the pedals, but now with the newer trucks, they’re more comfortable to ride on and adjustable for them," Nieves said.

Lewis' training only takes three weeks. A job is already lined up for her, and the company is paying her tuition. She says it's worth it for the steady work, the money and another unforeseen bonus: Showing the boys whose boss.

"They’re like, 'Aw, I don’t think she can back up a truck,' but when you get in there...you put your seatbelt on and you show them that you can do it, they’re like, 'Oh, let me step back. Maybe she can do it.'"

Lewis was asked if driving a big rig made her feel powerful.