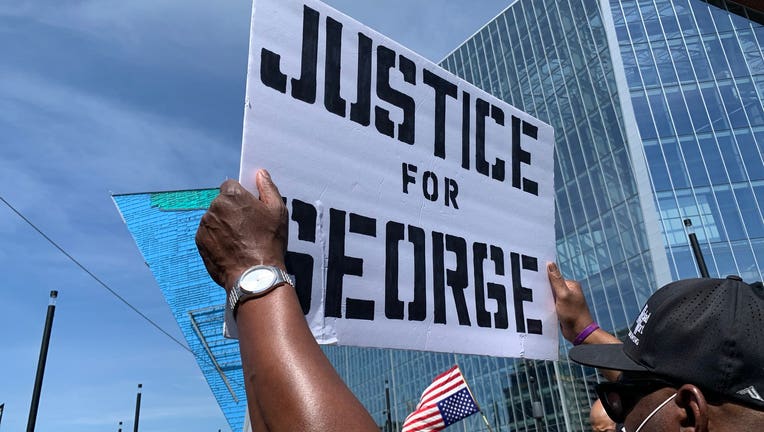 OAKLAND, Calif. - Emotions ran high in the country and in the Bay Area over the weekend as people, cooped up for months because of the coronavirus quarantine, finally burst out of their homes to unleash the anger and the anguish they feel over the death of a black man at the hands of a white police officer in Minneapolis.

Small groups of looters came out in force, trashing shops and lighting fires in San Jose, San Francisco, Oakland, Emeryville and typically quiet Walnut Creek, where many of these cities ended up imposing curfews to force people back inside.

At a news conference Saturday night, San Francisco Mayor London Breed said she understood the high tensions, especially as an African American woman, over the needless death of George Floyd when a white officer sat on his neck, killing him on May 25. That office has now been charged with murder.

But she said a line was crossed when protesters began to "assault" police officers and destroy property and shops, some of which is owned by black businesspeople.

"What we are seeing... the violence, the vandalism and the crimes being committed in our city, not against property but against other people, that is something that we will not tolerate."

Protester Jessica Vo in San Jose, who cleaned up after vandals, said that the message of equality and justice seems to be lost when buildings are damaged and torched.

"I think it's really important the message we're trying to portray to America in response to the injustice of George Floyd," Vo said. "However, I think the message was lost through the violence and destruction."

Oakland Mayor Libby Schaaf said she has never seen the level of unrest like this around the country.

Still, she said she was not ready to impose a curfew, despite the arrest of 60 people on Sunday night involved in "criminal activity," because of the historic symbolism of oppression against people of color.

Schaaf said she reserved the right, however, to change her mind if more harm comes. She said 30 police officers have been injured during the protests and she noted the death of a federal security guard over the weekend, although there is no evidence at this point that it is connected to the George Floyd protests.

Oakland mayor Libby Schaaf is not ready to impose a curfew saying it symbolizes historical oppression.

Civil rights attorney Adante Pointer, an African American man who represents many Bay Area men killed by police, said he does not support the looting. But he added he understands where the pain and frustration are coming from.

Throwing a rock into a glass storefront owned by a big corporation, he said, shows an attack on "commercial culture" and greed in general. Sometimes a small mom-and-pop shop might also, unfortunately, get hit as collateral damage, he said.

When people start to decry the destruction, Pointer highlighted the effects of the Boston Tea Party, a political protest that erupted when the American colonists were frustrated and angry at Britain for imposing “taxation without representation,” and dumped hundreds of chests of tea into the harbor.

"We look back and celebrate that now," Pointer said.

Pointer said he hoped the public won't simply focus on the seemingly pointless nature of the looters and "loss of property, and instead, be more outraged at the loss of life."

Rev. Amos Brown, the head of the San Francisco chapter of the NAACP, who marched with Martin Luther King Jr. said violence is not the answer. He lamented the fact that "violent, opportunistic individuals are taking advantage of the situation."

But Brown also said he knows exactly where this deep anger is coming from.

"America is sick and needs therapy," Amos said, noting the country's history of slavery and racism. And that's because society as a whole, he said, aims to keep African Americans down, " by keeping their knees on our necks."

But not all the demonstrations turned ugly.

In Oakland on Sunday, 4,000 cars peacefully formed a caravan to cry out for more equality and justice.

And then there were plenty of cleanup efforts, too.

Volunteers showed up throughout the Bay Area, especially in Oakland and San Jose to wipe off graffiti and sweep up shattered glass.

In Berkeley, a group of mostly young white women painted signs saying "We won't be silent" and "Black Lives Matter" to be planted on front yards and used at peaceful rallies, including one Monday afternoon on front of Oakland Tech.

An African-American businessman walked by the sign-making process and told the group from behind his mask: "Thank you. You don't know how much this means to me."

KTVU's Gasia Mikaelian and KTVU staff contributed to this report. Lisa Fernandez is a reporter for KTVU. Email Lisa at lisa.fernandez@foxtv.com or call her at 510-874-0139. Or follow her on Twitter @ljfernandez 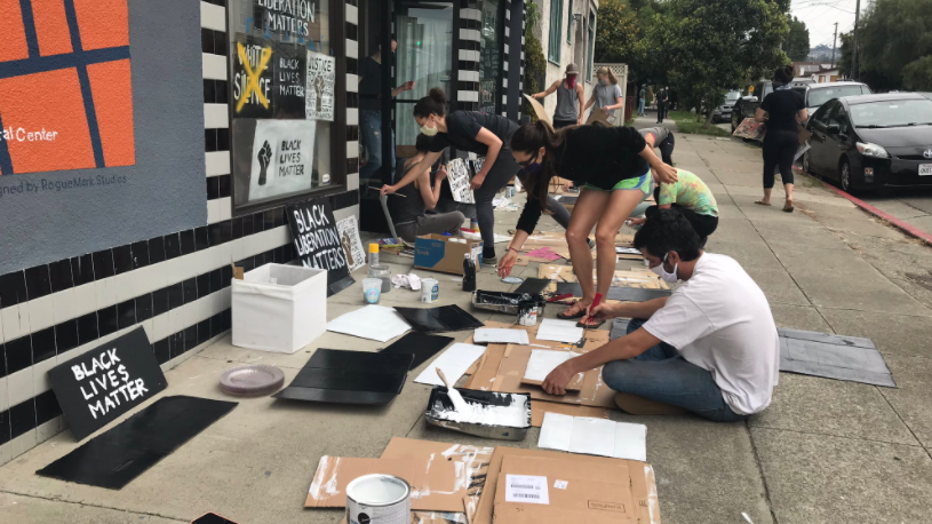 People make signs at Rogue Mark studios in Berkeley. May 31, 2020