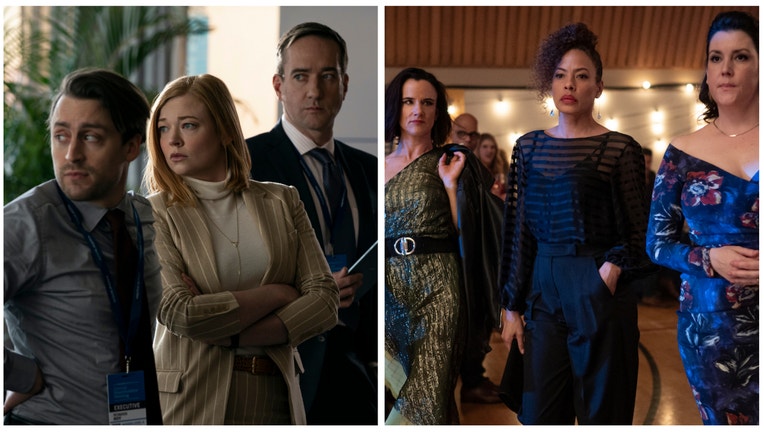 On Monday, Sept. 12, the 74th Primetime Emmy Awards will honor the best and brightest of the current TV landscape. Ahead of television’s biggest night, FOX Digital is taking a deep-dive into some of the shows that shaped the 2021-2022 season. Here culture writer Emma Fraser argues that Showtime’s buzzy freshman survival series "Yellowjackets" could — and maybe should — beat HBO juggernaut/Emmy favorite "Succession" for Outstanding Drama Series.

Logan Roy (Brian Cox) can reduce a grown man to a puddle of tears through a well-placed jab or expletive tossed in their direction. Yet while the "Succession" patriarch is one of TV’s most terrifying figures, he has ways to go to match the horror-laced experience of the "Yellowjackets" soccer team. High school is fraught at the best of times, but most students don’t have to contend with surviving a plane crash and hiding their involvement with a cannibal cult.

Like its figurehead, "Succession" is a powerhouse that will be hard to beat this awards season. The third season of Jesse Armstrong’s HBO drama leads the pack of nominees with 25 nominations, including a record-breaking 14 acting nods. In a rare year when none of the previous year’s Outstanding Drama titles are back in contention ("The Crown" took the prize last year), the divided Roy family are the favorites to score big at the Emmys and add to their impressive array of previous wins (including taking home the Outstanding Drama Series statuette in 2020).

However, let’s not rule out the "Yellowjackets" underdogs, who have the power to survive in the wilderness for 19 months. Even against old favorites like "Ozark" and other newcomers like "Squid Game," Ashley Lyle and Bart Nickerson’s much-talked-about Showtime survival series managed to rack up a robust seven nominations — including nods for acting, writing, directing and Outstanding Drama Series. "Succession" is the one to beat in that latter category, but its victory isn’t signed, sealed and delivered until the envelope is opened. Here’s why "Yellowjackets" deserves to take the Emmys crown instead.

This story contains plot details from throughout the first season of "Yellowjackets."

The directing: Dueling tones and timelines 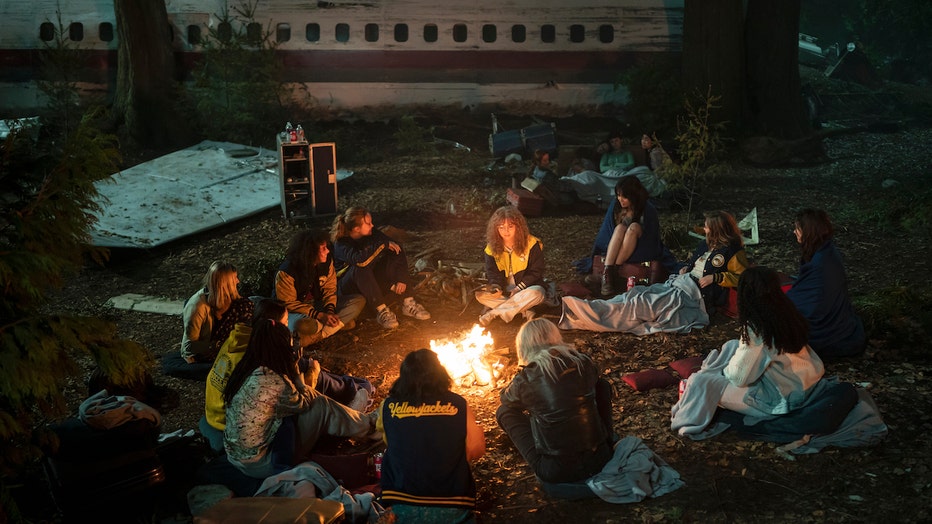 No matter what anyone says about the divisive "Lost" series finale, the consensus is that J.J. Abrams directed one of the best pilots in television history. Nearly 20 years later, Karyn Kusama has proven that when plane crash storylines are involved, lightning can strike twice.

Kusama’s tantalizing opening installment of "Yellowjackets" received a nomination in the Outstanding Directing category, which speaks to its brilliant combination of spectacle and intimacy. Grounding a mystery in the familiar is a tricky line to walk, but the tense forest cult ritual that kicks off the "Yellowjackets" premiere is integral to the fan theorizing that lit up subreddits like Christmas trees and helped make the show such a cultural sensation last winter.

The pilot then draws us into recognizable interpersonal landscapes and supernatural circumstances across two timelines — a teenage survival story circa 1996 and a present day character drama where the adult versions of those high school survivors are still struggling to put the past behind them.

It’s a testament to Kusama that she manages to keep the tone playful and foreboding across both timelines. "Succession" isn’t the only show to keep its audience on their toes — and on the edge of their seat. Can the Antler Queen rule the icy woodland and the Emmys?

The writing: Girlhood is a nightmare 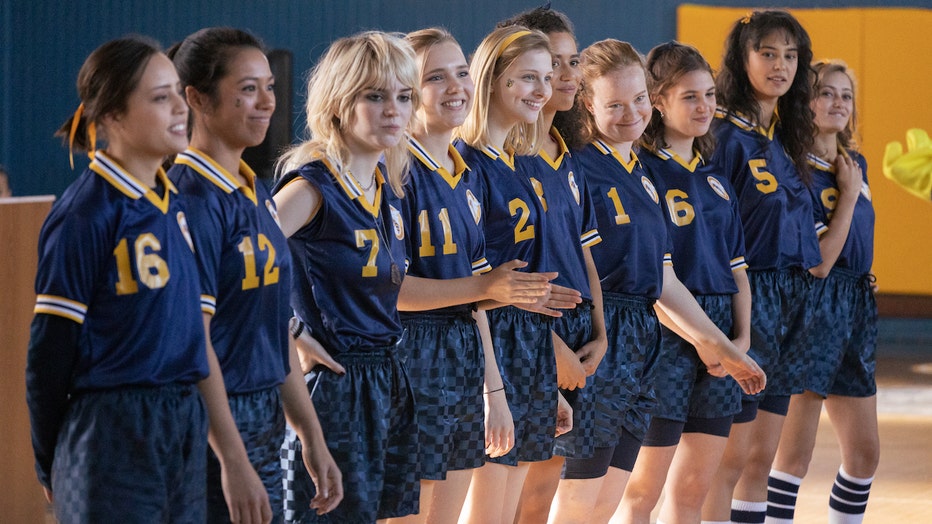 For all its visual panache, Showtime’s mystery-laced drama doesn’t sacrifice (pun intended) characterization in favor of drawing out the creepy delights and dread permeating the two timelines. Whereas "Succession" has the clear edge in the Outstanding Directing category, where it scored three nominations, "Yellowjackets" is the only drama with multiple nominations in the Outstanding Writing for a Drama Series category. Lyle and Nickerson are up for the pilot as well as the second episode, "F Sharp," which they co-wrote with Jonathan Lisco. Yes, "Yellowjackets" could split its vote (ditto "Succession" in directing). Still, those multiple nominations point favorably to the Television Academy's understanding that the brilliance of this freshman season goes beyond its showier action scenes and violent introduction.

Girlhood is a nightmare for the Yellowjackets soccer team long before they step foot on the plane, and a fight that breaks out at a bonfire in the pilot is indicative of the tricky teeange politics that will only grow larger across the series. In these character moments, it’s clear the "Yellowjackets" creatives have a handle on their high school era scenes and aren’t simply dialing up on-trend ‘90s nostalgia.

The second episode, "F Sharp," meanwhile, focuses on marital strife and the aftermath of the plane crash, which don’t score equal trauma points but emphasize the ability of "Yellowjackets" to serve each crisis with care and attention. It isn’t all doom, despair and amputating legs either, as present-day survivor Misty (Christina Ricci) delivers a dinner date that doubles as a lesson in romantic perseverance. Ricci’s bubbly tone in the face of a car crash meal is award-worthy in and of itself — and presumably helped her score a nomination for Outstanding Supporting Actress in a Drama Series. 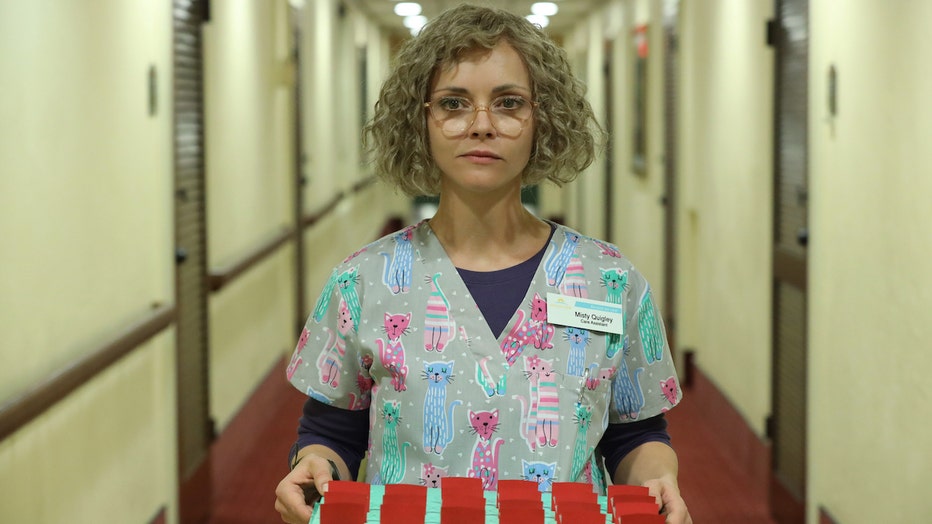 Speaking of captivating characters, if "Succession" striver Kendall Roy (Jeremey Strong) were to face off against "Yellowjackets" survivor Shauna Shipman (Melanie Lynskey) in a battle of words — or a physical skirmish — I am putting all my money on Shauna. Sure, Kendall has the resources, but Shauna and her friends are a force. Plus, her wife-guy husband is dedicated to keeping his family together no matter the cost.

Of course, Lynskey is not going head-to-head with Strong in their respective categories, and both casts dig deep into the nuances of the fraught environments they have to navigate. But it’s worth taking a moment to celebrate the ensemble of "Yellowjackets" in particular.

In the show’s opening episode, a cutthroat atmosphere takes on a literal meaning when we see a figure fall into a spiked icy trap before she is drained of her blood and then served up for dinner. The women who survived this experience have built a protective wall around their memories, and toggling between the present-day timeline and the 1996 adolescent thread is a masterclass in casting and performance. The Television Academy clearly agrees as casting directors Junie Lowry Johnson and Libby Goldstein were nominated for the formidable lineup. ("Succession" casting duo Avy Kaufman and Francine Maisler took home the prize at last week’s Creative Arts Emmys). 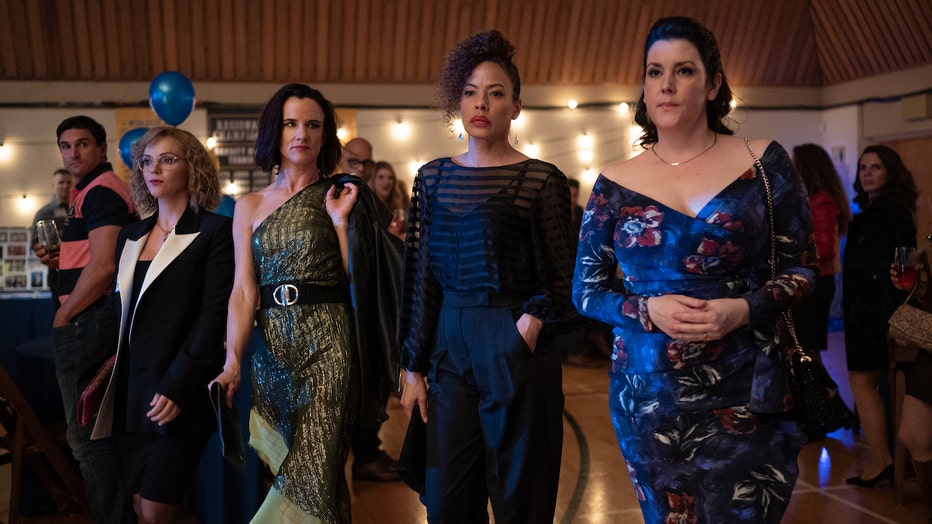 There is no doubt who the younger counterparts are — even without hearing their names — and the way the past comes alive through creepy calling cards establishes the ghosts that linger. Ricci's citizen detective is twisted, darkly comedic and just looking to make a connection in the same way her younger self (Samantha Hanratty) failed to achieve. Whether holding an investigator hostage or making herself indispensable in the middle of nowhere, Misty is staking a claim.

Elsewhere, the burgeoning romance between Taissa (Jasmin Savoy Brown) and Van (Liv Hewson) offers a love story respite from the perils in the woods. In the present, meanwhile, adult Tai (Tawny Cypress) is hiding a deep dark secret while trying to run for public office. And in both timelines, Nat (Juliette Lewis and Sophie Thatcher) is a ball of rage fighting to survive personal demons, and whatever malevolent presence haunts the Yellowjackets.

Each version of these characters faces societal pressures in addition to the pressures they place on themselves. And that is no more apparent than with Lynskey and Sophie Nélisse’s portrayal of Shauna. After more than two decades of memorable performances, it’s heartening to see Lynskey getting widespread praise and plaudits, including a nomination for Outstanding Lead Actress in a Drama Series. And Nélisse matches the potent combination of strength, fear and guilt that hovers beneath the surface.

WATCH FREE ON TUBI: Melanie Lynskey in "Hello I Must Be Going"

With its virtuosity across so many facets of television-making, "Yellowjackets" might just have a chance to beat "Succession" this Monday. At the very least, it’s more than worthy of an Emmy crown to add to its antler one.

About the writer: Emma Fraser is a freelance culture writer with a focus on TV, movies and costume design. She has contributed to Elle, The Daily Beast, IGN, Vulture, The Cut, Thrillist, Little White Lies and more. Follow her on Twitter and Instagram: @frazbelina.

The Fall (2013-2016): Gillian Anderson and Jamie Dornan lead this detective series about a brutal serial killer operating in Belfast, Ireland. She’s Superintendent Stella Gibson and he’s Paul Spector, a seemingly respectable family man with a murderous secret. The point here isn’t to figure out who did the crime, but why Paul feels an impulse to torture and kill. With its psychological angle and exploration of doubling and mirror images, "The Fall" is a brooding, slow-burn series perfect for a binge watch. Rated TV-MA. Three seasons, 17 episodes. Also featuring Aisling Franciosi, John Lynch, Niamh McGrady.

"The Fall" is streaming free on Tubi — get the app

How to watch "Yellowjackets"

The complete first season of "Yellowjackets" is streaming via Showtime. Showtime is available as an add-on to Hulu, Prime Video and most cable TV subscriptions; in August 2022, it combined with Paramount+ to form a single streaming service, though both are still available as stand-alone services. Currently, the combined services start at $7.99/month after a 7-day free trial. Prices are slated to rise for new subscribers when that introductory discount ends on October 2.