Two minors were killed and eight others were injured in a shooting at a party with over 200 people being held at an Airbnb in Pittsburgh over the weekend. The names of the two dead have not been released and police have not given out any details about possible suspects.

At least four major shootings were reported over the Easter holiday weekend in the United States, rocking communities with violence that left multiple people dead and dozens injured.

The shootings occurred in two locations in South Carolina, as well as in Portland and Pittsburgh, in which shots fired during a party killed two minors and left at least 31 people wounded.

The violence came after President Joe Biden last week highlighted his administration’s effort to break through the gridlock in Washington to address gun deaths and mass shootings, including the development of new regulations to crack down on ghost guns — which are privately made firearms without serial numbers that are increasingly cropping up in violent crimes.

In Pittsburgh, two male teenagers were killed and at least eight people wounded when shots were fired during a party at a short-term rental property. The "vast majority" of the hundreds of people at the party were underage, the city's Police Chief Scott Schubert told reporters. The Allegheny County Medical Examiner’s Office identified the two victims as Jaiden Brown and Mathew Steffy-Ross, both 17.

Investigators believe there were multiple shooters, and Schubert said police were processing evidence at as many as eight separate crime scenes spanning a few blocks around the rental home. 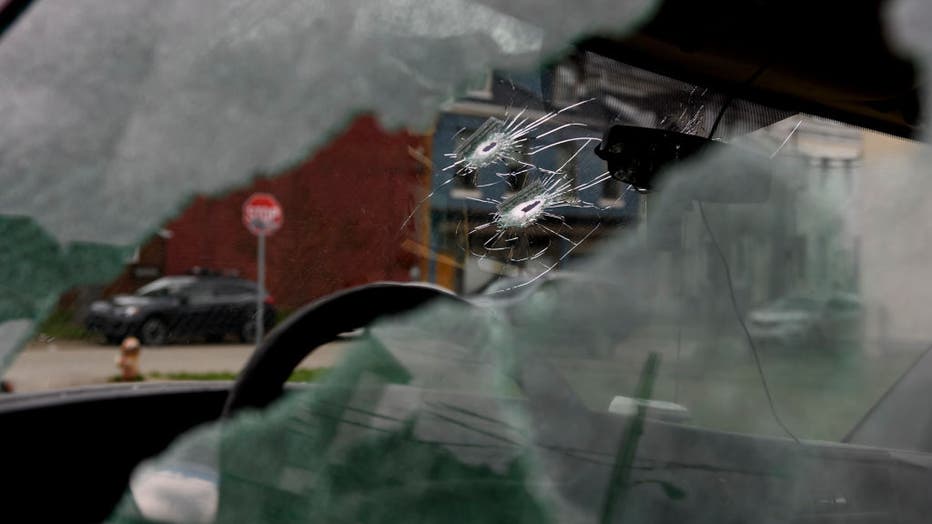 PITTSBURGH, PA - APRIL 17: Bullet holes are seen in a van parked outside an Airbnb apartment rental along Suismon Street on April 17, 2022, in Pittsburgh, Pennsylvania. (Photo by Jeff Swensen/Getty Images)

Two separate shootings were reported in South Carolina. On Saturday, gunfire erupted at a busy mall in the state capital of Columbia. Nine people were shot, and five people sustained other kinds of injuries while trying to flee the scene at the Columbiana Centre, Columbia Police Chief W.H. "Skip" Holbrook said Saturday. The victims ranged in age from 15 to 73. None faced life-threatening injuries.

A suspect in the shooting, identified as 22-year-old Jewayne M. Price, was later arrested in connection with the shooting.

Price's attorney, Todd Rutherford, told news outlets on Sunday that his client fired a gun at the mall, but in self-defense. Rutherford said Price faces a charge of unlawfully carrying a pistol because he legally owned his gun but did not have a permit to carry a weapon.

Columbia police said on Twitter that a judge agreed Sunday to let Price leave jail on a $25,000 surety bond. He was to be on house arrest with an ankle monitor, police said.

"It was unprovoked by him. He called the police, turned himself in, turned over the firearm that was used in this, and gave a statement to the Columbia Police Department," Rutherford said, according to WMBF-TV. "That is why he got a $25,000 bond."

About 90 miles south of the mall shooting, gunfire also erupted in the early hours of Easter morning at Cara’s Lounge in Hampton County, which was hosting an Easter Bash when the chaos erupted. Authorities said at least nine people were shot, although no one was reported killed.

In Portland, one person was killed and three others were injured in a shooting reported on Sunday evening, according to FOX 12.

The Easter weekend mass shootings were in addition to other gun violence in reported recent days. Last week, a gunman opened fire in a New York subway car, wounding 10 people. A suspect was arrested the next day. Earlier this month, six people were killed and 12 others wounded in Sacramento, California, during a gunfight between rival gangs as bars closed in a busy downtown area just blocks from the state Capitol.

The Gun Violence Archive, a nonprofit that shares gun violence statistics, defines a mass shooting as having four or more people injured or killed, not including the perpetrator. It has counted 144 mass shootings so far in 2022 across the U.S.