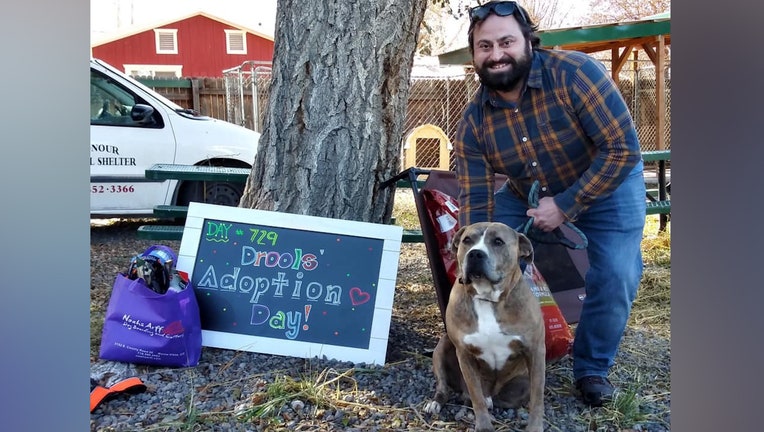 After spending more than 700 days in an animal shelter, one lucky pup finally found his forever home.

“Drools,” a 4-year-old male pit bull-boxer mix, spent approximately 729 days at the Conour Animal Shelter - Upper Rio Grande Animal Society in Monte Vista, Colorado, but thanks to a joint effort between the shelter and Kacey Widetich, Relay For Rescue founder and executive director, he secured a home and a family.

Relay For Rescue is a nonprofit animal welfare organization that aims to reduce pet overpopulation and minimize animal suffering, according to the organization’s website. 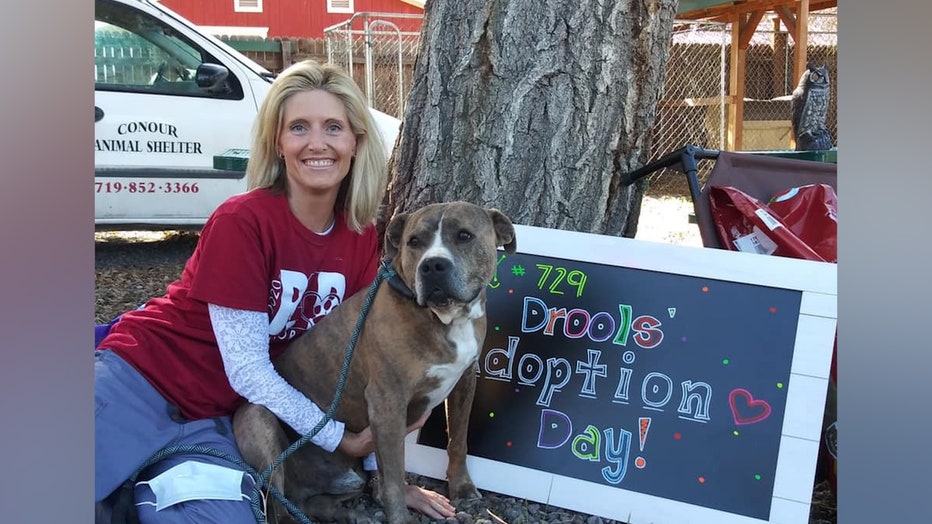 Widetich had actually moved into the shelter and slept with Drools in an effort to help acclimate him to being around people. Her goal was to make sure whoever adopted him understood his specific needs.

Drools, while a sweetheart to most humans, does not do great around other animals and needed to be the only pet, according to the shelter. He knows basic commands, but truly needed an owner who was willing to be patient and do further training so Drools could be “his best self.”

In a video posted to the shelter’s Facebook on Oct. 28, Widetich outlined the rules for Drools’ future family.

Josh Simpson, Drools’ new owner, found out about the pup by pure coincidence, according to Stevie, the manager of the shelter.

Simpson was traveling from Dallas, Texas back home to Boulder, Colorado when he saw Drools’ story on social media and decided he had to have the dog.

So he sent a Facebook message to the shelter, followed by a phone call notifying them that he was available to change his route back home in order to meet with Drools.

Simpson and Drools had their first meet-and-greet on Oct. 28, and although the pup seemed a bit apprehensive, it was only a few minutes until he was asking for belly rubs and cuddles, according to Stevie.

Because Drools has specific care needs, the shelter arranged to have a second meet-and-greet on Nov. 4 just to make sure the pair were compatible.

While Simpson was very eager to go ahead and take Drools home during the first encounter, he understood the shelter’s specific methods for the special dog.

RELATED: ‘He rolled over with excitement’: Kentucky town elects dog as mayor

The night of the first meet and greet, Simpson took time to type out a heartfelt message to the shelter, detailing how he appreciated what they did for Drools. Simpson said in the note that he did not want to get his hopes up, but he already had a new name picked out for the dog: Monty.

“Josh took it all seriously and took the meet-and-greet process seriously,” Stevie said.

The shelter sent Drools and Simpson off with loads of donated toys, beds and treats. "I feel like I won the lottery," Simpson said.

“The dog has more beds than me,” Stevie said. “He has three beds!”

Unfortunately, dogs who are long-term residents in shelters due to the extra care they may require are not uncommon, according to the shelter.

Because of the attention Drools’ story got on other news outlets and on social media, the shelter was able to find homes for three of their other long-term residents.

"We were able to establish relationships with several rescues across the country to help move longtime dogs out of the shelter and into foster homes," Widetich told KRDO. "All of these dogs deserve a second chance at happily ever after just like Drools and I look forward to working with the shelter to ensure this continues to happen moving forward."

For anyone who wants to help the Conour Animal Shelter - Upper Rio Grande Animal Society, donations can be made to their GoFundMe.