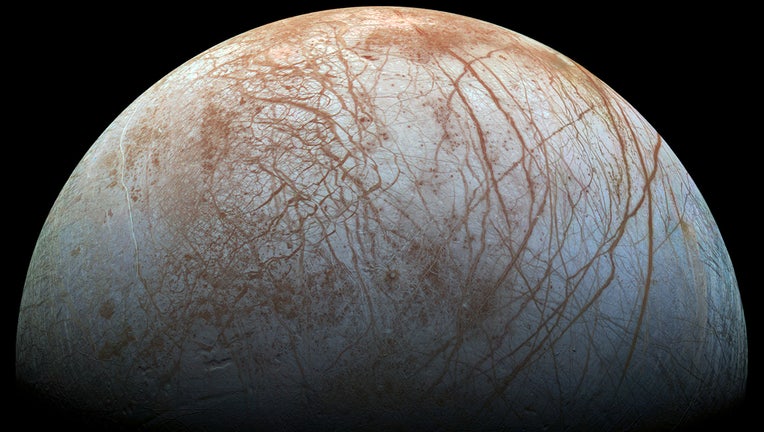 FILE - This is the color view of Europa from Galileo that shows the largest portion of the moon's surface at the highest resolution. (NASA/JPL-Caltech/SETI Institute)

If the double ridges found on Europa formed similarly to those in Greenland, scientists said this could provide compelling evidence that the method in which those ridges are created could also aid in creating environments under Europa’s icy surface to support life.

"Because it's closer to the surface, where you get interesting chemicals from space, other moons and the volcanoes of Io, there's a possibility that life has a shot if there are pockets of water in the shell," said the study's senior author, Dustin Schroeder, an associate professor of geophysics at Stanford University's School of Earth, Energy & Environmental Sciences (Stanford Earth). "If the mechanism we see in Greenland is how these things happen on Europa, it suggests there's water everywhere."

How the double ridges are formed

Usually, when scientists analyze ice formations on Earth, various tools are used to make observations from above or on the surface, according to the study’s authors. The reason for this is most of Earth’s ice formation activity occurs on the surface through subglacial lakes, melt ponds or naturally occurring drainage systems.

So when scientists analyzed how double ridges formed in northwest Greenland, they were able to deduce that ice fractured around a pocket of pressurized water and was refreezing inside of the ice sheet, causing two peaks to rise into a distinct "M" shape.

Imagine there’s a pocket of water beneath Europa's icy crust and somehow the surface is damaged to expose that water beneath. That pressurized water will then rise to the surface and refreeze, creating almost an ice plug.

Subsequent cracks will form at the sides of the ice plug, causing pressurized water to find other avenues of escaping and creating secondary fractures within the ice, pushing up compromised ice, which then forms ridges on each side of the initial opening.

Earth, of course, has a completely different kind of surface compared to Europa. But when scientists observed Europa’s visible features, they were surprised to see double ridges all over the moon’s surface that looked very similar to the ones observed in Greenland.

"We were working on something totally different related to climate change and its impact on the surface of Greenland when we saw these tiny double ridges – and we were able to see the ridges go from ‘not formed’ to ‘formed,’" Schroeder said.

"In Greenland, this double ridge formed in a place where water from surface lakes and streams frequently drains into the near-surface and refreezes," said lead study author Riley Culberg, a Ph.D. student in electrical engineering at Stanford. "One way that similar shallow water pockets could form on Europa might be through water from the subsurface ocean being forced up into the ice shell through fractures – and that would suggest there could be a reasonable amount of exchange happening inside of the ice shell."

Being able to understand how something forms on a celestial body millions of miles away from our blue planet could better help scientists understand whether or not a planet or moon could harbor life.

Europa has been observed for more than 20 years and is considered a prime candidate for life in our solar system, according to the study.

If the moon’s thick and icy surface has evidence of being more than just a crust and shows it could potentially be a dynamic system for how the surface was formed, this could also lead to a better chance of life beneath that surface, study authors hypothesize.

"If this mechanism controls double-ridge formation at Europa, the ubiquity of double ridges on the surface implies that liquid water is and has been a pervasive feature within the brittle lid of the ice shell, suggesting that shallow water processes may be even more dominant in shaping Europa’s dynamics, surface morphology, and habitability than previously thought," according to the study. 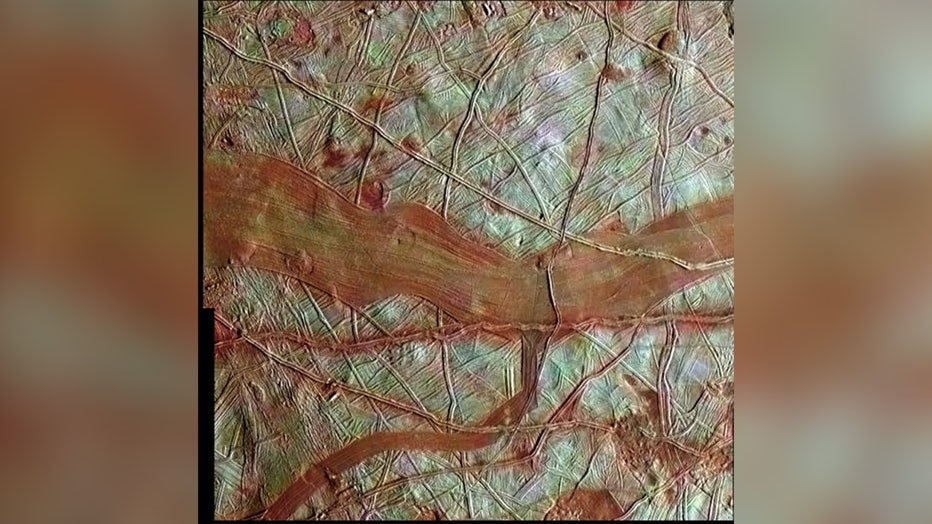 FILE - This colorized image of Jupiter's moon Europa is a product of clear-filter grayscale data from one orbit of NASA's Galileo spacecraft, combined with lower-resolution color data taken on a different orbit. (NASA/JPL-Caltech/SETI Institute)

What kind of life is possible in Europa

While there is not much going on on the surface, Europa is believed to be filled with vast oceans underneath its icy exterior.

"On Earth, life forms have been found thriving near subterranean volcanoes, deep-sea vents, and other extreme environments. These ‘extremophile’ life forms give scientists clues about how life may be able to survive beneath Europa’s ice shell," according to NASA.

If researchers are able to find life on Europa, it will likely not look like those aliens you see on "Mars Attacks." Life will likely come in the form of tiny microbes, according to the agency.