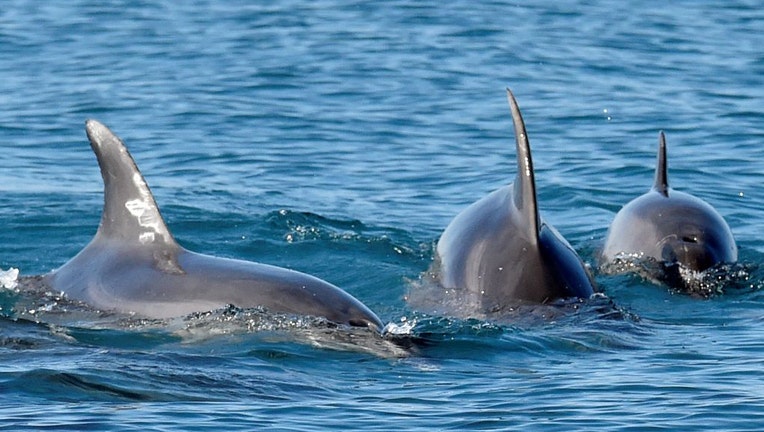 FILE-This photograph shows dolphins off the coasts of Port-Leucate on March 3, 2022. (Photo by RAYMOND ROIG/AFP via Getty Images)

REEDVILLE, Va. - Three young male dolphins simultaneously break the water’s surface to breathe — first exhaling, then inhaling — before slipping back under the waves of the Chesapeake Bay.

Synchronized breathing is something dolphins often do with close pals, like these males, or that mothers and calves do together, said Mann. It’s a way of affirming the relationships that are so important to these highly intelligent and social mammals, like a handshake or a hug among humans.

"It says, ‘We’re together,’" said Mann, who is based at Georgetown University.

While such close contact is essential to dolphin social bonds, sharing space and air can also quickly spread disease.

Mann and other scientists are trying to understand how a highly contagious and lethal disease called cetacean morbillivirus — related to measles in humans and first detected in Virginia and Maryland waters — can spread rapidly among dolphins along the Atlantic Coast, as it did from 2013 to 2015.

During that outbreak, more than 1,600 dolphins washed ashore on beaches from New York to Florida, according to the National Oceanic and Atmospheric Administration. Altogether, an estimated 20,000 dolphins died from the virus, and the region's population of coastal dolphins shrank by about 50%.

"It’s much like COVID — it's respiratory" in how it spreads, said Mann. "When dolphins breathe together at the surface, they’re sharing respiratory droplets just like we do when we’re talking or coughing on each other."

She realized that the key to understanding swift virus transmission was tracing dolphin social networks, much as public health authorities have tracked the COVID-19 pandemic.

RELATED: Dolphins dying by the dozens along East Coast

To understand how diseases circulate in social animals — such as humans, dolphins or chimpanzees — scientists must scrutinize not only the biology of a virus, but also how vulnerable populations interact, said Jacob Negrey, a researcher who studies animal viruses at Wake Forest School of Medicine.

"Contact networks represent a double-edged sword," he said. "Your friends that you need are also the individuals most likely to get you sick."

Although many people casually refer to a "pod" of dolphins, Mann dislikes the term, because it implies a stable group, like a pack of wolves. What she’s observed over 35 years of studying dolphins in the U.S. and Australia is that while dolphins have close buddies, they come and go regularly to check on others.

In the Chesapeake Bay area, tracking how dolphins mingle has required the scientists to distinguish more than 2,000 dolphins, mostly by distinctive shapes and markings of their dorsal fins.

"To me it’s like a face," said Mann. "I joke with my students that if they wore dorsal fin hats, I would remember all their names."

On mornings with light wind, the scientists set out in an 18-foot (5.5-meter) skiff to look for dolphins near where the Potomac River empties into the bay.

A trained eye can notice slight splashing on the water a mile (1.6 kilometers) away, or catch the glint of sunlight on a fin or tail.

Suddenly, she shouted for the boat to slow down and pointed with one hand. "Dolphins by the pier, close to shore."
Ann-Marie Jacoby, a Duke University marine and conservation scientist, peered through binoculars, then smiled in recognition. "We have Abe Lincoln and his buddy Andrew Jackson," she cried.

Because the Potomac runs through Washington, the researchers have named many dolphins for American historical figures.

"It’s so nice to find dolphins that we know," said Jacoby. "These males have been seen together regularly together over the past year."

To identify less familiar dolphins, they photograph their dorsal fins, then compare them to a catalog of fins created since 2015 — essentially a Facebook for dolphins.

James Buchanan was now less than 16 feet (5 meters) from the other dolphins, which Collier said was close enough for disease spread. "The droplets from their breathing may be shared."

All three dolphins surfaced and breathed together, then disappeared under the waves.

"This is typical male behavior," said Mann. "The males stay pretty coordinated with each other. The females sync, but not as regularly. They sync mostly with their offspring."

That difference in behavior may help explain why males died in greater numbers during the most recent cetacean morbillivirus outbreak — a hypothesis the researchers are examining.

While Atlantic bottlenose dolphins are not endangered, NOAA considers their coastal populations to be " depleted," meaning "below optimum sustainable population."

Outbreaks of the virus emerge here every 25 years or so. And they strike dolphins and their close marine relatives elsewhere, including some endangered whale species.

University of Hawaii researcher Kristi West called the disease — which causes skin lesions, pneumonia, brain infections and a suppressed immune system — "the most significant threat to dolphins and whales on a worldwide scale."

While viruses naturally occur in the wild, human disruption of marine habitats has made animals more vulnerable. "The disease becomes an even more significant threat when we combine it with other stressors that dolphins and whales throughout the world are facing," said West.

From the boat on the Chesapeake, the water looks clear and calm.

"We don’t see what’s under the surface," said Mann, casting a doleful glance down. "But carbon and plastics and prey depletion — these are all things that threaten the animals," along with warming oceans from climate change.

Such stresses weaken dolphins' immune systems. "So they are extremely vulnerable to virus outbreaks," she said.
Collier hopes their research can be used to help forecast when epidemics might occur, then use that information "to try to enact policies in areas where human disturbance is really high."

Perhaps that could mean limiting noisy boat traffic or run-off pollution when outbreaks are ongoing or likely, she said.
It’s hard to be dour for long on the boat, as the scientists keep scanning for dolphins.

"A baby!" Mann suddenly shouted with glee, as a pair of dolphins approached.

In their first few months after birth, dolphin calves have visible lines on their sides from being folded inside the womb.
Jacoby recognized this particular mother’s fin then, referring to the dolphin — not the former U.S. senator from Texas — let out a cheer: "Kay Bailey Hutchison has a baby with fetal lines!"