TALLAHASSEE, Fla. (NSF) - Confronted by yet another record day of new coronavirus infections, Gov. Ron DeSantis on Saturday said the state would begin cracking down on restaurants and bars that don’t follow guidelines limiting the number of people inside the establishments but stood by his decision not to mandate that people wear masks.

Florida added more than 4,000 new cases during a 24-hour period that ended Saturday morning, bringing the total to nearly 93,800, a more than 49 percent increase in the past two weeks as most of the state entered the second phase of an economic reopening plan that included allowing bars to operate and restaurants to serve more customers.

DeSantis, in a rare Saturday afternoon news conference, again defended his decisions in reopening the economy, saying that many of the new cases were showing up among young people who are more likely asymptomatic and will not require extensive health-care services if they do get sick. Younger people also are less likely to die from the virus than seniors. 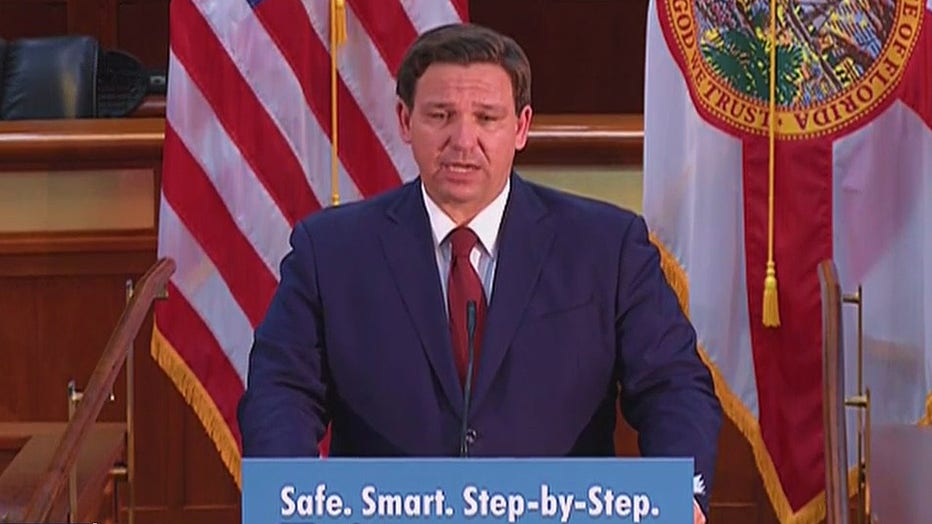 DeSantis urged people to wear masks if they could not distance themselves from others but repeated his opposition to imposing a statewide mandate, even as large cities like Miami, Orlando and Tampa have put mask-wearing requirements in place.

“I have not preempted locals,” DeSantis said. “But at the same time, you have to enforce that. I think statewide penalties would be problematic."

Still, the governor acknowledged that the positive test rate was increasing, a sign of what is known as community spread of the virus, and that the increase could pose threats to older residents who are more in jeopardy of getting seriously ill from COVID-19, the respiratory disease caused by the coronavirus.

“Certainly a cause for concern,” DeSantis said of the rising numbers of cases. “But our cases are shifting in a radical direction younger.”

DeSantis said that while “Florida has been very reasonable” he said there had been reports of “people just jam packed” in some restaurants and bars, in violation of guidelines limiting the numbers of customers inside establishments.

"There are reasons why it was done that way," DeSantis said. "It wasn’t just pulled out of a hat. ... When those very reasonable guidelines are disobeyed, well it ends up defeating some of the purpose of what we are trying to accomplish."

To that end the governor said his administration will ramp up inspections by the Department of Business and Professional Regulation, which regulates bars and restaurants and hair salons, to make sure they are adhering to the guidelines. DeSantis did not mention increasing staff at the department to help with increased enforcement efforts.

The Department of Business and Professional Regulation does not regulate many businesses that have reopened, though DeSantis spokeswoman Helen Aguirre Ferré said all state agencies will be instructed to ensure that businesses under their jurisdiction abide by reopening guidelines.

The Florida Department of Health on Saturday issued a new public health advisory that urged people to wear masks if they are unable to maintain social distancing and urged people to refrain from being in crowds of more than 50 people.

DeSantis said he held the news conference to add “context” to media reports about the rising number of cases and to push back on what he called headlines that “leave a false impression.” The governor noted the coverage of 23 Clemson University football players who tested positive for the coronavirus and that the media displayed it as “some sort of death sentence. That’s not the reality of the situation.”