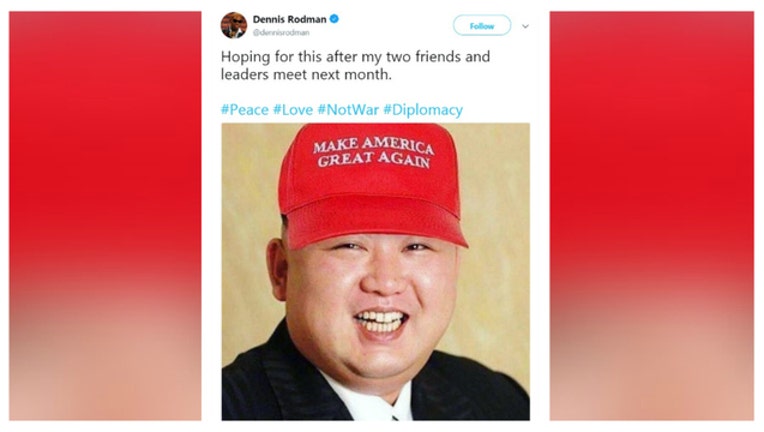 FOX NEWS - The only man in the world who is friends with both the dictator running North Korea and the president of the United States hopes the two will hit it off when they meet in May.

NBA Hall of Famer Dennis Rodman, who has made various trips to North Korea since 2013, took to Twitter on Friday to express his support for the upcoming summit between President Trump and North Korean leader Kim Jong Un.

“Hoping for this after my two friends and leaders meet next month. #Peace #Love #NotWar #Diplomacy,” Rodman tweeted.

Trump announced early in March plans to meet with Kim Jong Un over the country’s nuclear program. This week, the president said he believes that the North Koreans want to make peace.

“For years and through many administrations, everyone said that peace and the demilitarization of the Korean Peninsula was not even a small possibility,” Trump tweeted. “Now there is a good change that Kim Jong Un will do what is right for his people and for humanity. Look forward to our meeting!”

Rodman made his first trip to North Korea in February of 2013 for a “basketball diplomacy” trip.

The NBA star returned twice more in 2013 and again in January 2014 for a basketball game with the dictator to celebrate Kim birthday.