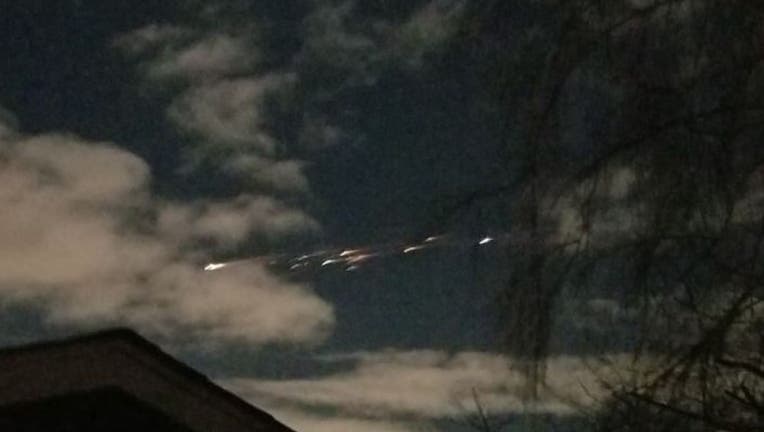 What social media thought looked like a meteor shower turned out to be burning debris from a SpaceX rocket lighting up Pacific Northwest skies Thursday night, the National Weather Service in Seattle said.

"The widely reported bright objects in the sky were debris from a Falcon 9 rocket 2nd stage that did not successfully have a deorbit burn," the service said in a tweet about the astral occurrence that the Seattle Times reported was seen shortly after 9 p.m.

There were no reports of damage or other impacts on the ground.

According to the National Weather Service of Seattle, the mysterious meteor-like objects were not meteorites at all, but debris from the Falcon 9 rocket launch.

NWS Seattle said the debris that burned in the atmosphere was from the rocket owned by SpaceX.

What looked like a meteor shower seen throughout Western Washington had many in awe Thursday night.

The rocket delivered Starlink satellites, launched from Florida, into orbit earlier this week.

Jonathan McDowell, an astrophysicist with the Harvard-Smithsonian Center for Astrophysics, said the rocket launch debris failed to break up from the launch that happened nearly three weeks ago.

The debris could be spotted around 9 p.m. Thursday. Many viewers saw debris shoot across the sky in the Seattle area and as far as Tacoma and Ocean Shores.

Q13 Seattle contributed to this report.