Jurors have found Danielle Redlick not guilty of second-degree murder in the death of her husband. However, she was found guilty of tampering with evidence. Redlick was released from the Orange County Jail late Friday evening.

ORLANDO, Fla. - Jurors on Friday found Danielle Redlick not guilty of second-degree murder in the death of her husband. However, she was found guilty of tampering with evidence.

The jury of six continued deliberations early in the morning and reached a verdict shortly before noon. She had faced life in prison if convicted of murder. After the verdict was read, Redlick burst into tears and appeared to mouth "thank you" to the jurors.

A joyful Redlick was released from the Orange County Jail around 10:30 p.m. after spending the last three years behind bars. She told FOX 35's Connor Hansen it was "amazing" to be released and that she intended to call her kids as one of her first acts of freedom.

"Praise God! Praise God!" she said as she left the jail.

Jurors have found Danielle Redlick not guilty of second-degree murder in the death of her husband. However, she was found guilty of tampering with evidence.

Over the course of the trial, Redlick's lawyers argued that the 48-year-old stabbed her then-65-year-old husband in self-defense after he pinned her against a kitchen island, smothering her.  State prosecutor Sean Wiggins painted a more violent picture — describing the couple's home after Michael's killing as a "horror scene" in his opening remarks.

Redlick told police her husband cheated on her and the two separated, ultimately deciding to reconcile and move back in together. She said that’s when her husband found her flirty text messages with another man. Her husband, a University of Central Florida executive, was found stabbed to death several hours later.

Redlick admitted in court to stabbing her husband, adding that she was scared and afraid she was going to die. "I couldn’t breathe," she said.

Prosecutors argued that Redlick tried to clean up the crime scene before calling 911 about 11 hours after the two struggled in their Winter Park home.

Jurors have found Danielle Redlick not guilty of second-degree murder in the death of her husband. However, she was found guilty of tampering with evidence. 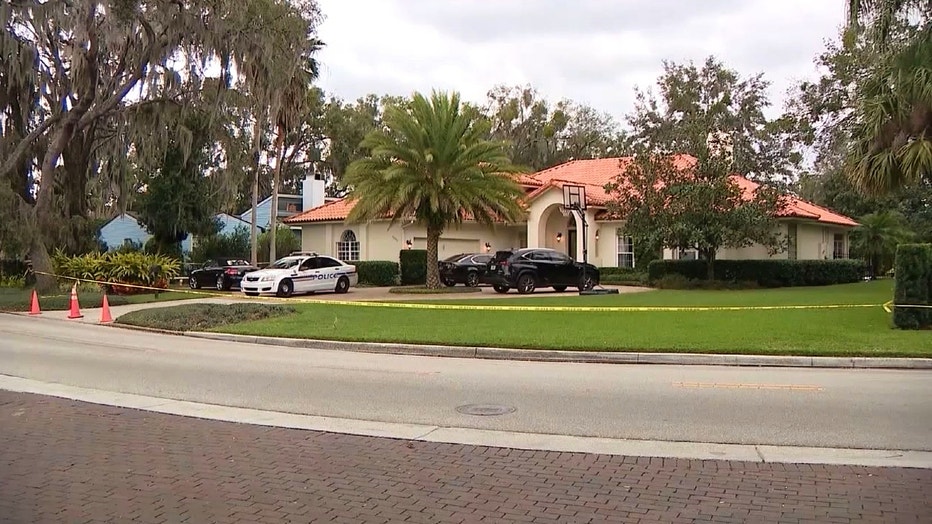 "This defendant did everything she could to avoid responsibility for her actions," Wiggins said in his opening statement.

When she did call 911 on the morning after her husband died, she told police that she thought he was deceased and that he "died of a heart attack," Wiggins said. A medical examiner found no signs that he suffered a heart attack that evening. He went on to describe what responding officers saw at the scene, including "blood-soaked towels, mops soaked in blood, a five-gallon bucket filled with pinkish water," as well as "blood in the primary bedroom shower" that contained Michael's DNA.

The prosecution painted the couple's relationship as a tumultuous one that Michael wanted to fix. Redlick's attorneys also described a difficult marriage but pointed to her husband as the aggressor. On the night of the deadly attack, it was "the angriest that she has ever seen him," her attorney explained.  The defense called on witnesses who confirmed they had previously seen Danielle Redlick with injuries -- further highlighting the history of domestic violence in their relationship.  One witness was another parent who had watched the Redlick’s son. She noted Danielle had a black eye when they met for a play date between their sons.

The pair have two children together and were married for nearly 15 years.

If you are a victim of domestic violence or know someone who does, help is available. The National Domestic Violence Hotline is 800-799-7233. Harbor House of Central Florida also has a confidential help line, (407) 886-2856.