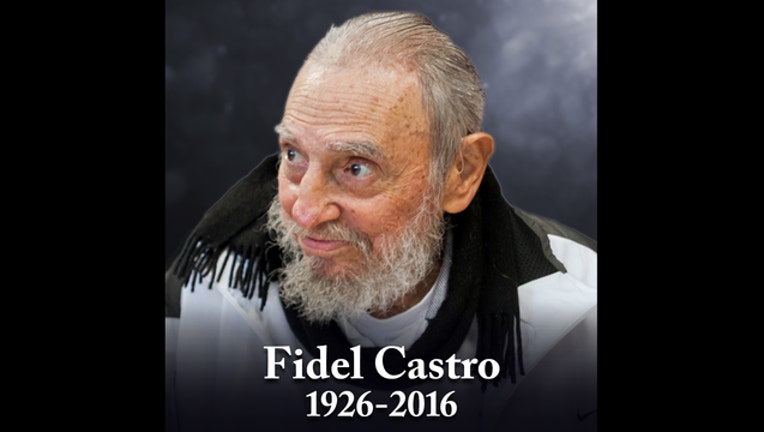 MIAMI (AP) — In the heart of Miami's Little Havana, Cuban exile Armando Garcia said Sunday's funeral of Fidel Castro granted neither simple closure nor optimism for immediate change, but was a glimmer of hope for democracy in Cuba.

Garcia, 76, a retired electronics salesman who left Cuba in 1963, sipped espresso as others smoked cigars at the Versailles restaurant, a hub for exiles who fled political oppression or other hardships since Castro's communist revolution of 1959. Huge, noisy crowds had gathered for days after word spread last weekend of Castro's death, but had dissipated by Sunday.

"It's a light at the end of the tunnel," Garcia said of Castro's death, but he said he was not counting on moves toward democracy any time soon.

Garcia said it was painful to see leaders in some Latin American countries praising Castro "'for supposedly liberating the poor, when in reality he has enslaved the poor."

He joked that there was no sadness at the restaurant about Castro's funeral. "It's the best funeral ever. Look at us. No one is crying, everyone is happy, no need for handkerchiefs. It's a party," Garcia said.

Jose Llanes, 70, said nobody should be fooled by any images from Cuban showing thousands of people mourning. "When people are oppressed, they are told what to do."

The older generations of Cuban exiles have generally backed a hard line toward U.S. relations with the island, including an embargo and strict limits on engagement until the island shows moves toward democracy, but that view has softened among the younger generation.

Giancarlo Sopo, 33, founder of Miami-based CubaOne Foundation, which arranges trips for younger Cuban-Americans to visit the island, said in a telephone interview that for five decades Fidel Castro dominated the way people viewed Cuba. "It is now my hope that when people now think of Cuba they think of the hopes and dreams of the 11 million people who live there," he said.

"Both younger and older Cuban Americans care about Cuba, but we express that passion in different ways. My father was a Bay of Pigs veteran," Sopo said. "For his generation caring about Cuba meant supporting sanctions. My generation has taken a different approach. My generation wants to go to the island, meet their peers, reconnect with their families and learn about the cultural affairs. The focus has broadened, but we still very much respect their pain."

Aida Levitan, president of Artes Miami, a nonprofit organization that promotes Latino artists, said that the funeral "instills a little bit of hope for the Cuban people that this is the beginning of the end."

"Many people are not optimistic because Raul Castro still runs the country, but Fidel was the mythical figure and so it feels there is a difference," she said. "Like a Spanish expression goes: There's no evil that survives 100 years."