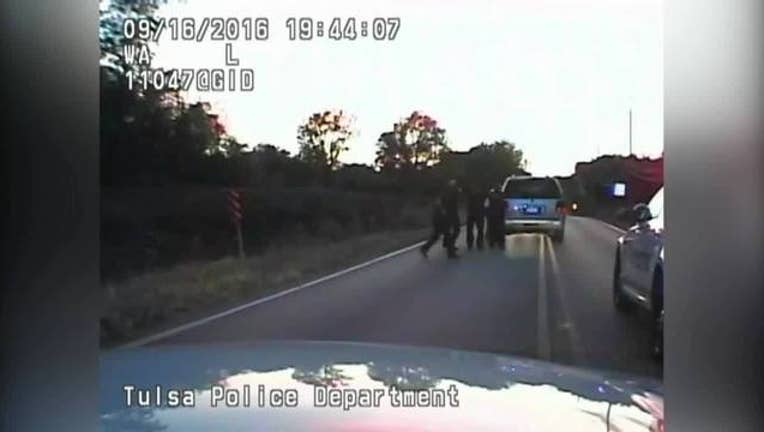 TULSA, Okla. (AP) — Less than a week after an unarmed black man was shot dead by a white police officer on a Tulsa street, prosecutors charged the officer with first-degree manslaughter, a decision that may prevent unrest in a city with a long history of tense race relations.

Tulsa officer Betty Shelby "reacted unreasonably" when she fatally shot 40-year-old Terence Crutcher on Sept. 16, prosecutors wrote in an affidavit filed with the charge on Thursday. Police also acted quickly to provide videos of the shooting to black community leaders and members of Crutcher's family and then released them to the public.

The swift action in Tulsa stood in contrast to Charlotte, North Carolina, where police refused under mounting pressure Thursday to publicly release video of the shooting of another black man this week and the National Guard was called in after two nights of violent protests. Demonstrations in Tulsa since Crutcher's death have been consistently peaceful.

Phil Turner, a Chicago-based defense attorney and former federal prosecutor, said the motivation of prosecutors in Tulsa may have been partly to allay outrage and avoid the kind of violence Charlotte has seen.

"But I don't think the charge was only to give the crowd some blood. ... No. I think (prosecutors) must have thought charges were warranted," he said.

If convicted, Shelby faces between four years and life in prison.

Crutcher's twin sister, Tiffany Crutcher, said her family is pleased with the charge, but she and her attorneys want to ensure a vigorous prosecution that leads to a conviction.

Attorney Damario Solomon-Simmons said: "We are happy that charges were brought, but let me clear — the family wants and deserves full justice.

"Not only for this family, not only for Terence but to be a deterrent for law officers all around this nation to know that you cannot kill unarmed citizens."

Shelby's attorney, Scott Wood, did not immediately respond to telephone messages seeking comment on the charges.

Dashcam and aerial footage of the shooting and its aftermath showed Crutcher walking away from Shelby with his arms in the air. The footage does not offer a clear view of when Shelby fired the single shot that killed Crutcher. Her attorney has said Crutcher was not following police commands and that Shelby opened fire when the man began to reach into his SUV window.

But Crutcher's family immediately discounted that claim, saying the father of four posed no threat to the officers. And police said Crutcher did not have a gun on him or in his vehicle.

The affidavit filed Thursday indicates that Shelby "cleared the driver's side front" of Crutcher's vehicle before she began interacting with Crutcher, suggesting she may have known there was no gun on the driver's side of the vehicle.

The affidavit says Shelby told police homicide investigators that "she was in fear for her life and thought Mr. Crutcher was going to kill her. When she began following Mr. Crutcher to the vehicle with her duty weapon drawn, she was yelling for him to stop and get on his knees repeatedly."

Prosecutors offer two possible theories in charging documents: That Shelby killed Crutcher impulsively in a fit of anger or that she wrongly killed him as she sought to detain him. Lee F. Berlin, a Tulsa-based defense lawyer and a former assistant district attorney in Oklahoma, said prosecutors could present both theories or may decide to move forward with only one and let jurors decide.

Berlin also said he thought ongoing tests by the state medical examiner's office would be enough to delay the filing of criminal charges.

"So, yes, I was surprised it came back quickly," he said, adding that he and other Tulsa attorneys he spoke with thought any charges against Shelby were unlikely.

Shelby, who joined the Tulsa Police Department in December 2011, was en route to a domestic violence call when she encountered Crutcher's vehicle abandoned on a city street, straddling the center line. Shelby did not activate her patrol car's dashboard camera, so no footage exists of what first happened between the two before other officers arrived.

The police footage shows Crutcher approaching the driver's side of the SUV, then more officers walk up and Crutcher appears to lower his hands and place them on the vehicle. A man inside a police helicopter overhead says: "That looks like a bad dude, too. Probably on something."

Police Sgt. Dave Walker has said investigators found a vial of the drug PCP in Crutcher's vehicle. Shelby's attorney, Wood, has said that Shelby completed drug-recognition expert training and thought Crutcher was acting like he might be under the influence of PCP.

Attorneys for Crutcher's family said the family didn't know whether drugs were found in the SUV, but that even if they were, it wouldn't justify the shooting.

In the videos, the officers surround Crutcher and he suddenly drops to the ground. A voice heard on the police radio says: "Shots fired!" The officers back away and Crutcher is left unattended on the street for about two minutes before an officer puts on medical gloves and begins to attend to him.

Crutcher's shooting followed a long history of troubled race relations in Tulsa, dating to the city's 1921 race riot that left about 300 black residents dead. As recently as 2013, a City Council vote to rename the city's glitzy arts district, which had been named after the son of a Confederate veteran and Ku Klux Klan member, drew vehement opposition.

Earlier this year, a white former volunteer deputy with the Tulsa County Sheriff's Office was sentenced to four years in prison after he was convicted of second-degree manslaughter in the shooting death of Eric Harris, who was also black and unarmed.

But Kunzweiler, the Tulsa prosecutor, emphasized the city's peaceful reaction in the aftermath of Crutcher's shooting.

"It's important to note that despite the heightened tensions felt by all, which seemingly beg for an emotional response and reaction, our community has consistently demonstrated the willingness to respect the judicial process," he said.