Detectives are trying to determine the identity of a baby found with a couple in Volusia County.

DELEON SPRINGS, Fla. - A missing couple from Indiana was found in Central Florida in a stolen van with a baby.

Police said the couple was listed as "missing out of Indiana."

Deputies staked out the stolen rental van until the pair showed up with a stroller.

A missing couple from Indiana was found in Central Florida in a stolen van with a baby. Police said the couple was listed as "missing out of Indiana."

The baby boy is now in the care of the Department of Children and Families while a DNA test is underway.

Body camera from Volusia County deputies captured the moment they recovered the baby from the back of a stolen Penske rental van that was parked at the DeLeon Springs State Park.

Deputies said the baby’s car seat was attached to a makeshift seatbelt with bungee cords in the rear cargo area surrounded by dirty diapers. 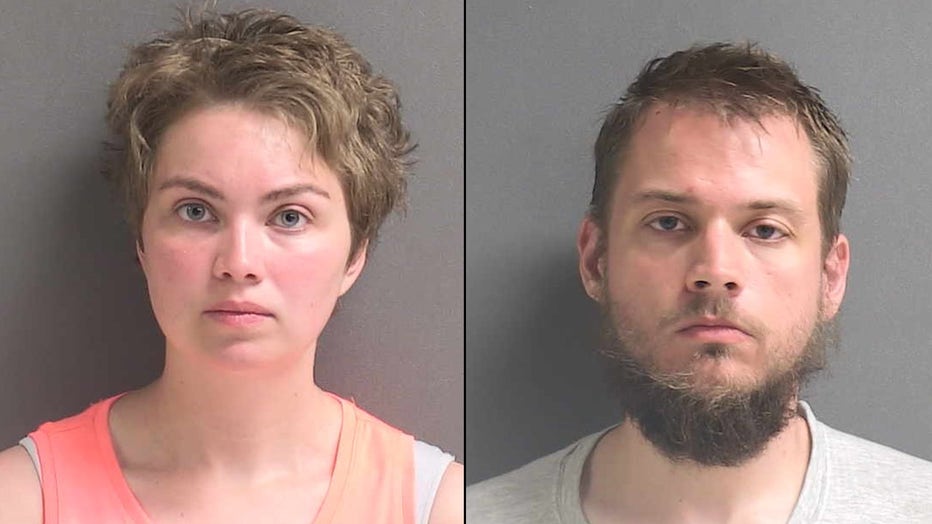 According to the incident report, Amanda told deputies the baby was not hers.

During her first appearance at the Volusia County Jail, the judge made it clear that there will be a no-contact order with the baby to which Amanda spoke up and said, "Can I ask how long?" The judge said she would need to talk to her lawyer.

One week ago, Lincoln Germana’s mother reported the couple missing from Greenwood, Indiana, and was concerned for their 3-year-old daughter they left behind.

The Greenwood Police Department reported the mother feared her daughter-in-law could be suffering from postpartum depression after a possible miscarriage in June and was worried about her son’s mental state.

The attorney representing Lincoln at his first appearance told the judge, "He’s here in Florida because he thought there were magical powers in DeLeon Springs that would heal him."

The couple first told authorities that the baby boy did not belong to them and gave the child two different names.

Later on, the couple changed their story and said the baby was theirs, and he was born at home in Indiana.