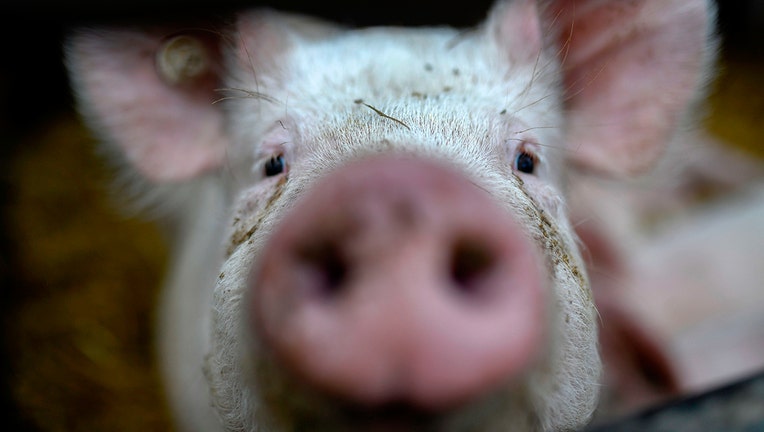 U.S. pork farmers may be forced to euthanize as many as 10 million hogs by September as a result of production-plant shutdowns brought on by the coronavirus pandemic, according to the National Pork Producers Council.

At least 14,000 reported positive COVID-19 cases have been connected to meatpacking facilities in at least 181 plants in 31 states as of May 13, and at least 54 meatpacking facility workers have died of the virus at 30 plants in 18 states, according to an investigation by the Midwest Center for Investigative reporting.

Dozens of meat production plants closed before President Trump invoked the Defense Production Act in late April allowing large facilities to remain open during COVID-19 in an effort to address supply chain and liability issues, but farms and plants still face overcrowding threats as some plants remain closed or have significantly slower production.

Pennsylvania Farm Bureau Vice President Chris Hoffman, who won America's Best Pig Farmer of the Year award in 2019, told FOX Business that production in these meat processing plants is back up to about 70 percent, but until production gets back up to 100 percent, the industry will see backlog issues.

He added that these backlog issues vary depending on which area of the country farmers are operating in and which plant they are shipping to.

"I've heard folks say the recovery of some of these plants is faster than expected. That is a great sign that the number [of euthanized hogs] could be less," Hoffman said, but added that the wellbeing of the people who work in these processing plants is what's most important.

About 170,000 hogs that have reached the country's harvest standards can't be marketed due to plant closures and slow production, the NPPC said in a press release. The organization added that housing for these market-ready hogs is "not an option" because "younger hogs coming up through the supply chain need someplace to go for care and feeding."

Producers are then faced with the choice to watch their animals suffer due to a lack of proper care or euthanize them, which the NPPC notes is the "only humane option" for farmers who produce food.

It can take almost a year to care for a pig from the time it is born until the time it is ready for harvest when it has reached about 270 pounds, according to national guidelines, the release says. Hogs that weigh more than 270 pounds "cannot be processed through the nation's primary harvest facilities due to constraints in the equipment and concerns with worker safety," the NPPC release says.

Hoffman said it takes 10 months to raise a pig to be ready for harvesting.

"Every week, we have a certain amount of hogs in our facility that need to be processed. It's not like you can turn the spigot off. It takes 10 months for the [growth] process to be completed. The lack of processing creates an overcrowded situation," he explained.

The amount of time and work farmers put into raising pigs is what makes the euthanization issue more delicate than many people may realize. Even though the pigs are raised to eventually be butchered and sold to customers as food, Hoffman says a farmer's animals become like family because of the dedication required to take proper care of them before harvest.

"These are generational farms," Hoffman said. "Here we are with farmers who are posed with a situation they never thought they'd have to deal with, and that's euthanizing animals. My concern as I look at the industry is: It's a real toll on a farmer, day in and day out. These animals are like our family, they are designed for meat, and it breaks your heart to make these kinds of decisions."

Different farms approach these schedules in different ways, and some pork producers are operating normally despite the pandemic, but the industry as a whole is facing dark times. Pork harvesting was down nearly 40 percent from the prior year as of May 6 due to the pandemic. Low harvesting numbers are expected to result in the euthanization of "10,069,000 market hogs ... between the weeks ending on April 25 and September 19, 2020, resulting in a severe emotional and financial toll on hog farmers," the NCCP release notes.

Members of the organization called on Congress to allocate more than $1 billion to the Department of Agriculture's Farm Service Agency Emergency Assistance for Livestock, Honeybees and Farm-Raised Fish, as well as $505 million for euthanization and environmentally responsible disposal expenses.

"U.S. pork producers are facing an unprecedented financial and animal welfare crisis," NPPC President Howard “A.V.” Roth, a hog farmer from Wisconsin, said in a Tuesday statement before the bill was passed. "These provisions represent a critical lifeline for hog farmers struggling to weather this storm. We urge Congress to come together quickly on final legislation that includes these provisions.”

Hoffman agreed that the HEROES Act is a "step in the right direction," but the details are what will make the difference to farmers.

Ivanka Trump and USDA Secretary Sonny Perdue on Friday launched a $3 billion "Farmers to Families Food Box Program," which requires certain food distributors to allocate food from small farms to non-profits and faith-based groups. The program is part of the Trump administration's $19 billion coronavirus farmer's assistance program, which was included in the administration's $2.2 trillion Coronavirus Aid, Relief, and Economic Security, or CARES, Act.

Hoffman said he commends the president for realizing that processing plants were struggling to get relief from the Payment Protection Program and that the food supply chain needs to be high up on the government's list of priorities during the pandemic. On the other hand, he said he wishes the process of getting farmers the funding they need to operate and potentially euthanized their animals would come faster.

He added that outside of government aid, communities and social media have been helpful for farmers struggling to get rid of extra livestock.

"There are some feel-good stories about truckloads of hogs coming into Pennsylvania, where people are actually buying them from farmers from the Midwest and selling them to people privately," Hoffman said. "I've seen Facebook posts of people selling 3,000 hogs for a certain price, and people are coming in trailers from out of state to pick them up."

Farmers are innovative people, Hoffman said, and will likely come out of the pandemic stronger than before. The country may even see an uptick in smaller processing plants and butcheries, as well as more direct buying from farms to consumers.