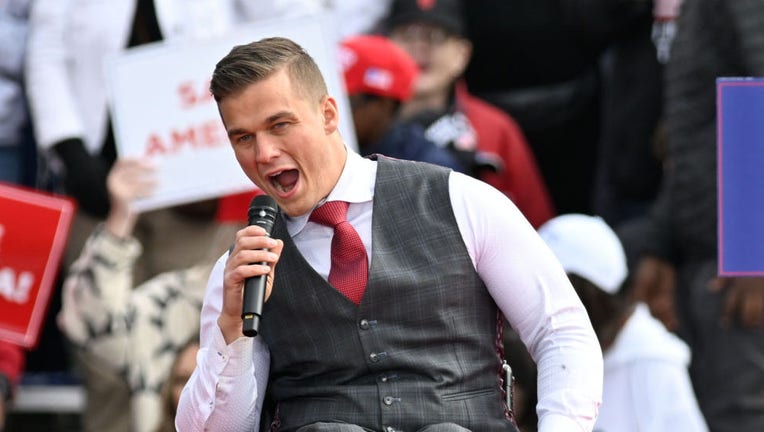 WASHINGTON - U.S. Rep. Madison Cawthorn’s unexpected 2020 win made him the youngest member of Congress and a rising Republican star. Then the scandals started to pile up.

On Tuesday, the 26-year-old conservative North Carolina firebrand left his election night party early, and a spokesperson told reporters that he was conceding the race to state Sen. Chuck Edwards. The Associated Press later called the race for Edwards.

Cawthorn faced a slew of problems as he sought a second term — many of his own creation.

That led the state’s Republican establishment, including North Carolina’s two GOP senators, to mobilize against him.

On Monday, former President Donald Trump urged voters to give him a second chance. But that apparently wasn't enough Tuesday.

A Republican congressman whom Trump once called a "third rate Grandstander" and a "disaster" for Kentucky coasted to victory Tuesday in his primary election.

Rep. Thomas Massie had angered Trump by trying to obstruct a massive COVID-19 relief package in 2020 when he was in the White House. Trump took to Twitter to urge GOP leaders to "throw Massie out of Republican Party!"

The two apparently patched things up. The bill passed, and Trump endorsed Massie earlier this month.

Massie's primary was among the first congressional races to be called during Tuesday's primary elections in Kentucky, North Carolina, Oregon, Idaho and Pennsylvania.

Clay Aiken won the affection of TV viewers across the U.S. in 2003 as the runner-up in the hit reality show "American Idol." His effort this year to win a Democratic primary in a U.S. House race from North Carolina came up shorter.

Aiken, who lost a congressional election in 2014, was defeated on Tuesday by state Sen. Valerie Foushee. He finished a distant third.

Foushee, a local school board member before joining the General Assembly, benefited from big super PAC spending on her behalf. One associated with the American Israel Public Affairs Committee spent $2.1 million on ads supporting her candidacy, while a second group financed by cryptocurrency billionaire Sam Bankman-Fried spent $1 million.

An establishment-backed state lawmaker won the Democratic primary for Kentucky’s only Democrat-held U.S. House seat Tuesday, defeating an activist who drew national attention during protests over the police killing of Breonna Taylor.

McGarvey held a big fundraising advantage and an endorsement from incumbent U.S. Rep. John Yarmuth, the House Budget Committee chair who is retiring after 15 years in the seat. McGarvey, an attorney, was also endorsed by several state lawmakers and labor unions.

Scott, a Black woman, was arrested during 2020 protests over Taylor’s death. But she was also called a "fraud" by Taylor’s mom, who suggested that those involved in the protests were raising money off her daughter’s name.

Louisville — the state’s largest city — remains a Democratic stronghold while most of Kentucky is solidly Republican.

A test for moderates in Oregon

U.S. Rep. Kurt Schrader, a moderate Oregon Democrat, has often been at odds with his party. He likened Trump's second impeachment trial to a "lynching," voted against Nancy Pelosi for House speaker in 2019, and helped contribute to the collapse of President Joe Biden's social spending agenda with his opposition to parts of it.

It may have finally caught up with the seven-term congressman, who was trailing progressive challenger Jamie McLeod-Skinner early Wednesday. The results of the race were expected to be delayed after a printing error forced a hand count.

Although Schrader won Biden's endorsement ahead of Tuesday's primary, he also had to appeal to many new voters. His newly redrawn district is slightly less Democratic than before and contains only about half of the voters who previously elected him to the House.

McLeod-Skinner, meanwhile, has the backing of the local Democratic parties in all four counties covered by the seat. If she wins, she could face a tough general election campaign against the Republican victor.

Republican U.S. Rep. Mike Simpson of Idaho faced conservative attorney Bryan Smith on the ballot in 2014 and smoked him by more than 20 percentage points. Many thought this time could be different.

Simpson, who is seeking his 13th term in office, easily defeated Smith and a handful of other primary challengers Tuesday.

Some thought Simpson would be vulnerable in a primary. He had inflamed some hard-line conservatives because he supported an investigation into the origins of the Jan. 6 insurrection on the U.S. Capitol by a mob of Trump supporters. He also called Trump "unfit to be president" back in 2016.

Another major issue was Simpson's advocacy for breaching dams along the Snake River to help protect salmon, which Smith and others argued would devastate farmers and ranchers.

But much like the far-right opposition to state Gov. Brad Little, the challenge fell short at the ballot.

Big spending by a cryptocurrency billionaire and the House Democratic campaign arm helped catapult political newcomer Carrick Flynn to front-runner status in the crowded primary for a new Oregon seat.

It made the contest one of the most expensive primaries in the country. But it also stirred a powerful backlash that may have cost Flynn the race.

Early Wednesday, Flynn conceded to state Rep. Andrea Salinas, a three-term state lawmaker who is looking to become Oregon’s first Hispanic woman in Congress. The seat, which stretches from Salem to the Portland area, is heavily Democratic, and a primary win would all but guarantee her victory in November. The AP has not called the race.

In the closing weeks of the campaign, Flynn faced pointed questions about the more than $12 million in spending on his behalf. He said he did not have strong feelings about cryptocurrencies. And he welcomed the help from a super PAC affiliated with Pelosi.

But Salinas and others in the race made it a major issue. They even held a joint news conference where they decried the spending as an insult to voters.

It appears to have worked.