HARTFORD, Conn. - Connecticut is offering a $1,000 "signing bonus" to the first 10,000 unemployed people who land a full-time job, a unique incentive aimed at getting long-term jobless people back to work.

Connecticut Gov. Ned Lamont, a Democrat, said the new program, called "Back to Work CT," will begin May 24. To be eligible, applicants must complete eight consecutive weeks of a full-time job without receiving unemployment benefits.

Applicants will be able to sign up on the state Department of Revenue Service’s website and ultimately get paid the bonus after eight weeks in their new full-time job.

"So for those of you who have been long-term unemployed for a while, we’re going to pay you $1,000 at the end of two months of work, give you the incentive to get back to work, make sure work is worth your while, make sure that you can afford it, make sure if you need help on transportation, a little bit of extra help on child care, we’ve got the upfront money that allows you to do that," Lamont said.

Lamont said Connecticut’s unemployment rate has been trending down, but the state currently has 65,000 job openings as more COVID-19 restrictions have been lifted on bars, restaurants and other businesses.

The program will be funded through federal COVID-19 relief money. 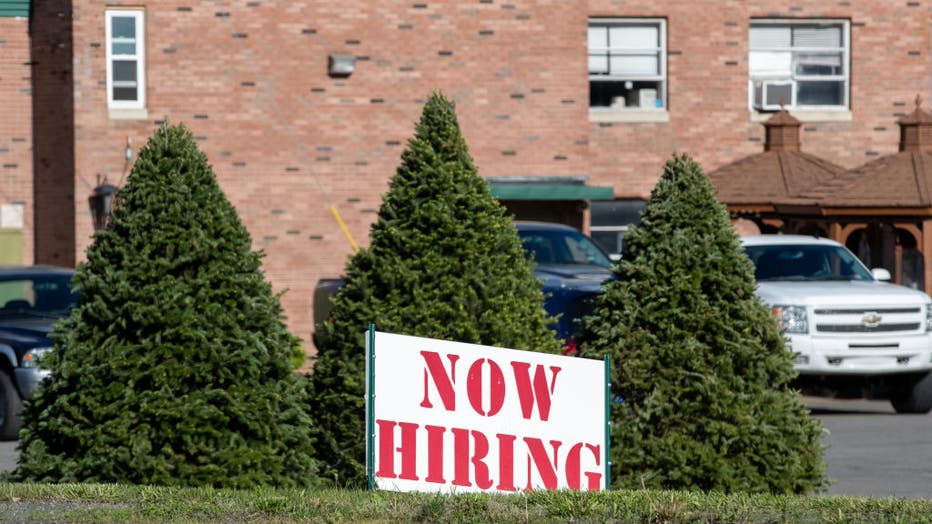 A "now hiring" sign is pictured in a file image taken in Mount Caramel, Pennsylvania on May 13, 2021. (Photo by Paul Weaver/SOPA Images/LightRocket via Getty Images)

More than a dozen states, most with Republican governors, have recently announced they will stop providing a $300 per week unemployment boost paid for by the federal government. Many have blamed a slowdown in hiring across the country on the supplemental benefits, saying people are remaining employed in order to keep collecting the $300 weekly boost — on top of state jobless benefits.

The supplement was included in President Joe Biden's $1.9 trillion stimulus measure, approved in March, and is set to expire the week of Sept. 6.

Lamont said he didn’t consider taking that step. He acknowledged there are still residents afraid to work because of COVID-19 and thought it was fair to keep the $300 benefit in place.

Some businesses have cited the extra $300 as a reason they are struggling to hire. An analysis by Bank of America economists found that people who had earned up to $32,000 in their previous jobs can receive as much or more income from jobless aid. Some unemployed people say the extra benefit allows them to take more time to look for work, which can make hiring harder.

But there are other factors that help explain why many people who are out of work might be reluctant to take jobs. Some worry that working in restaurants, hotels or other services industries will expose them to the virus, according to government surveys. In addition, many women, especially working mothers, have had to leave the workforce to care for children who are still in online school for at least part of the week.

Biden earlier this week disputed the notion that the $300 payment is to blame for the drop-off in hiring last month. But he also urged the Labor Department to work with states on renewing requirements that recipients of unemployment aid must search for jobs and take a position if offered.

The job search rule was suspended during the pandemic when many businesses were closed and employment opportunities were few. A majority of states have now reinstated it.

"Anyone collecting unemployment, who is offered a suitable job must take the job or lose their unemployment benefits," Biden said last week.

Connecticut is not the first state to offer such an incentive for unemployed workers. Idaho previously offered up to $1,500 for people returning to work in the summer of 2020. Montana also launched a return-to-work bonus earlier this month, giving $1,200 payments to individuals who complete at least four weeks of full-time work.

Last week, Arizona Gov. Doug Ducey announced the state will stop paying the $300 federal supplement to unemployed workers and will offer up to $2,000 for those to return to full-time work.

RELATED: Ohio to award $1M each to 5 adults who received at least 1 COVID-19 vaccine dose