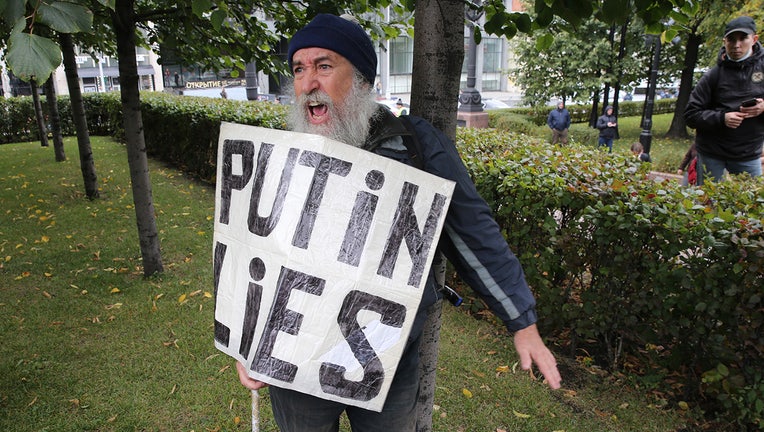 An activist with poster read: "Putin lies" shouts during the protest against the results of 2021 Parliamentary Elections, called by Communist Party, at Pushkinskaya Square, on September 25, 2021 in Moscow, Russia.(Photo by Mikhail Svetlov/Getty Image

MOSCOW - Russia's Communist Party filed multiple lawsuits Wednesday to contest parliamentary election results from online voting in Moscow, which party members allege was rigged and blame for their defeat in races in the Russian capital.

The party, which placed second nationally in this month's election, usually toes the Kremlin's line but already had engaged in an active effort to invalidate the disputed Moscow returns. Senior party members organized street protests and joined a coalition of Kremlin critics that also is trying to annul the capital's results from online balloting, an option that was available to voters in the Russian capital and several other regions.

The moves prompted authorities to detain a number of Communist Party members — pressure typically put on supporters of imprisoned opposition leader Alexei Navalny and not the second-biggest political force in Russia's parliament.

Election results two weeks ago made the Kremlin’s United Russia party the winner. United Russia received 49.8% of the vote for the 225 seats apportioned by parties and won 198 out of 225 seats for lawmakers who are chosen directly by voters. Together, the results gave the party a supermajority with 324 of the 450 seats in parliament.

The Communist Party came in second with 57 seats — an increase from the 2016 election. However, candidates put forward by the party lost 15 races in single-constituency districts in Moscow and blamed their defeat on the online balloting, alleging that it was rigged.

Critics pointed to a number of individual Moscow races as evidence of tampering. In those races, Kremlin-backed candidates were losing until the results of online voting came in, and they suddenly shot ahead.

The Communist Party has refused to recognize the results of the vote in Moscow and staged two street protests, after which police detained several party members.

The party planned to file over a dozen lawsuits contesting the results on Tuesday, but its members said police showed up at its Moscow office, paralyzing its work. On Wednesday morning, a lawyer in charge of the lawsuits was ordered to serve 10 days in jail.

Still, the party managed to file the suits later Wednesday.

"From the tribune of the courtroom, we will spill light on all the methods that the authorities used to falsify the results of the election. This publicity, in front of the whole country and I daresay the whole world, terrifies them (the authorities) terribly," senior member of the Communist Party, Valery Rashkin, told reporters outside a Moscow courthouse.

Also Wednesday, the Communist Party's faction in Moscow's city council, the City Duma, walked out on a session to protest the election results in Moscow.

Rashkin, who was among those who lost individual races in Moscow at the last minute, said the party intends to fight until the end.

"We won’t stop. We won’t be content with merely playing in court for a little and then stopping. No, this will not happen. We have stepped on the path of battling for justice, for the truth, for elections that are fair, open, transparent and competitive," he said.