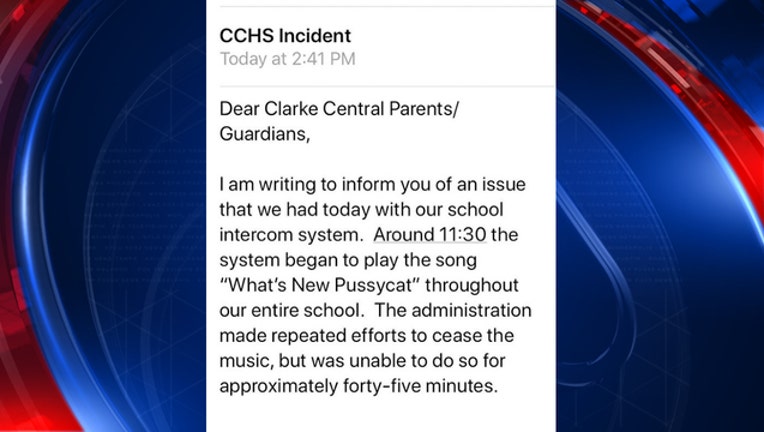 The message Clarke Central High School officials sent to parents earlier this week is making the rounds on the social media. In it, school officials wrote:

"I am writing to inform you of an issue that we had today with our school intercom system. Around 11:30 the system began to play the song "What's New Pussycat" throughout our entire school. The administration made repeated efforts to cease the music, but was unable to do so for approximately forty-five minutes."

John Mulaney, who created and stared in the short-lived, semi-autobiographical FOX sitcom "Mulaney," posted a picture of the note on his Instagram. In it, he simply wrote "Bravo" to the kids.

The prank mirrors a bit from Mulaney's standup where the comedian recounts a time when he was 11 years old and with his friends at a diner. They had inserted $7 into the jukebox to only select 21 plays of “What’s New Pussycat.” Mulaney explained how they slipped in one “It’s Not Unusual” before it reverted back to the other Tom Jones hit. Mulaney detailed his humorous social experiment in great detail during his routine.

"THIS IS MY SCHOOL," wrote one person in response. "This was the best thing to happen at my school all year."

"I’m a student at CCHS, and I can confirm that there was one 'It’s Not Unusual' after the 7th 'What’s New Pussycat,'" another person wrote in response.

Many of the replies seemed to support the prank, although some suggested the students were going to lose their prom over it.

The song length on “What’s New Pussycat” is about 2:15 which when played 21 times in a row would be about 47:15 long, which would be around the length of time the note stated the song was looping on play in the school.

No word on those behind the prank or if they will face disciplinary action.