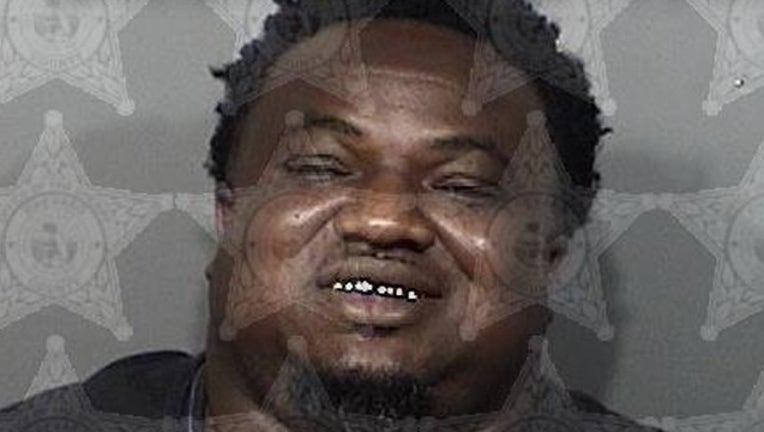 MELBOURNE, Fla. (FOX 35 ORLANDO) - A Florida man was arrested after choking his girlfriend, throwing a chair at a police officer, and resisting arrest.

The Melbourne Police Department said that they responded to a home on Reverend Nathaniel L. Harris Street on July 13th in reference to a disturbance. They met with a woman who told police about an argument with her boyfriend, who is also the father of their child. She said that her boyfriend, Travius Roberts, choked her to the point that she passed out for about 30 seconds.

She continued to recall the incident to police, stating that Roberts pushed her out of the house and choked her again. Roberts then went back into the home and grabbed their daughter. He placed her in a vehicle, but the victim was able to get the child back out.

Roberts reportedly then left the scene with the home's key. He went to his mother's residence on Williams Street. Police went there to speak with Roberts, who yelled "come on white crackers, bring it" and "I'm not going back to jail" upon arrival.

Police said that Roberts confirmed he got into an argument with the victim and claimed that she punched him in the face and chest area. He admitted to pushing the victim but said that at no other time did he touch her.

Police went back to the victim, who was locked out of the house since Roberts had the key, and reviewed what happened. The victim said that she did not want Roberts arrested but only wanted the key back.

Police then went back to Roberts, who was reportedly very argumentative. He refused to give up the key because he said that it was his key. He also advised police that if he was going back to jail, then the officers would need to pull out their guns and tasers to take him into custody. He also threatened to crack their skulls and said that he has guns, even though he is a convicted felon.

Police said that they attempted to arrest Roberts, but he blocked the officer's attempt. An officer and Roberts went into the residence together. The officer deployed his taser after Roberts broke free from his grasp. However, the taser attempt was not successful because Roberts threw a chair at the officer.

Roberts made his way upstairs and officers chose not to pursue him because he previously said that he had guns. He eventually made his way out of the home through the back door, which his mother advised officers of. He was eventually arrested.