In a proclamation, Gov. Ron DeSantis declared a Sarasota woman to be the "real" winner of a 500-meter freestyle event held last week. The top spot in the NCAA Division I swimming event went to University of Pennsylvania swimmer Lia Thomas, who was deemed the first known transgender woman to win the title. However, on Tuesday, the Florida governor said the winner should have been Sarasota-native Emma Weyant, who finished second and attends the University of Virginia.

OKLAHOMA CITY (AP) - Civil rights groups filed a federal lawsuit on behalf of three transgender Oklahoma schoolchildren, arguing the state's new law requiring students use only the bathroom of the sex listed on their birth certificate is unconstitutional.

"Plaintiffs and other youth who are transgender in Oklahoma schools now face mandated discipline, possibly even suspension, simply for using the restroom and other facilities at school corresponding with who they are," the lawsuit states.

Oklahoma is among about a dozen conservative states that have passed laws this year targeting the transgender population over bathroom use, participation in school sports, and gender-affirming treatments or surgery for young people.

Oklahoma's new law, which passed quickly through the GOP-controlled Legislature and was signed by Republican Gov. Kevin Stitt, was proposed after Stillwater Public Schools declined to change a policy allowing students to use the bathroom that agrees with their gender identity unless forced by law to do otherwise.

The bill also requires the State Department of Education to penalize schools that do not comply with the new law with a 5% reduction in state funding. 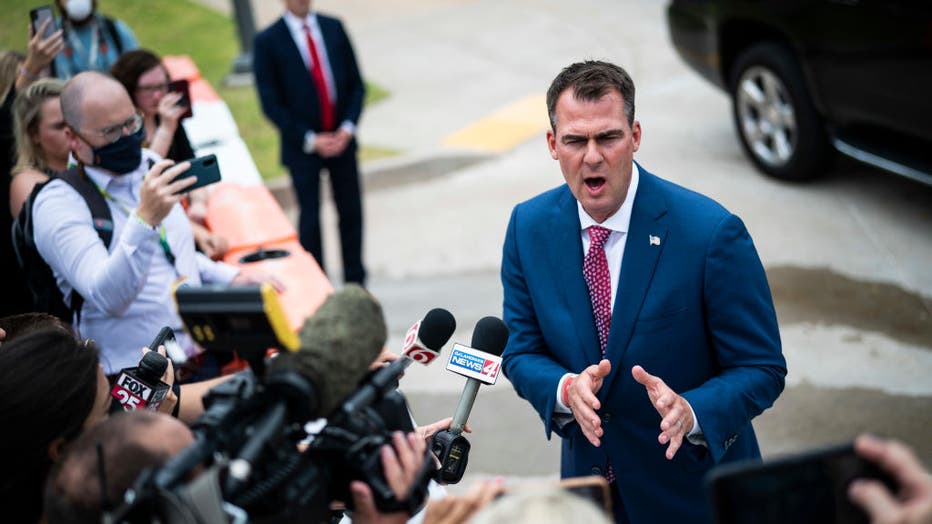 The lawsuit, filed by the American Civil Liberties Union, the ACLU of Oklahoma Foundation and Lambda Legal, a civil rights group focused on protecting the rights of LGBTQ people, argues the new law discriminates against transgender students in violation of both the Equal Protection Clause of the 14th Amendment to the U.S. Constitution and the Title IX civil rights law enacted as part of the Education Amendments of 1972.

The House author of the bill, Republican Rep. Danny Williams, said when the bill was signed that its goal was "to protect our children."

One of the plaintiff students, 16-year-old Noble High School senior Andy Bridge, said that while he was able to use the boys' bathroom without incident last year, the new law makes him feel singled out and excluded from the rest of his classmates.

"I am a boy, and while living authentically hasn't always been easy, it's given me a sense of relief and happiness," he said in a statement. "Being able to use the boys' restroom might seem like a small thing to others, but it is a vital step in my transition."

The two other plaintiff students, who used pseudonyms in the lawsuit, attend Moore Public Schools and a public charter school operated by Harding Independent School District.