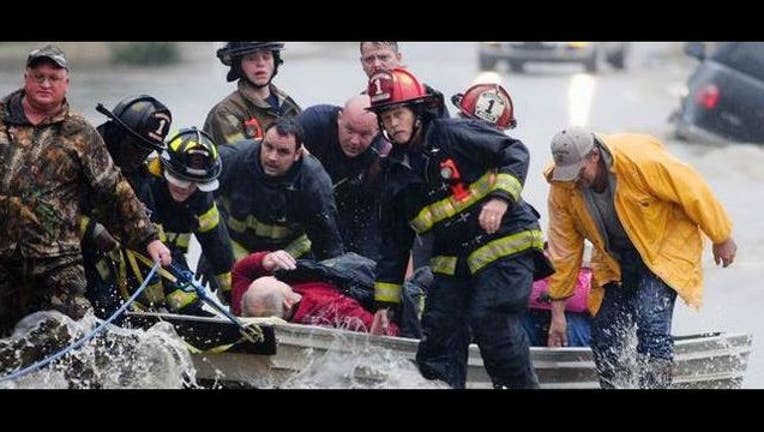 BIRMINGHAM, Ala. (AP) — A tornado touched down in north-central Alabama, including part of Birmingham, in the latest wave of severe weather that's hammered the South during Christmas week.

The funnel was spotted by witnesses outside the city about 5 p.m. Friday. An hour later the National Weather service confirmed that first responders were on the scene along Jefferson Avenue, a working class neighborhood less than 10 miles from downtown Birmingham.

Lt. Sean Edwards, a Birmingham police spokesman, said trees are down and people were trapped inside damaged houses, adding that several people were taken to hospitals for treatment of minor injuries, but further details were not immediately available.

Ruthie Green went door-to-door in a coat and a bicycle helmet to check on neighbors after the storm and swept debris from her front porch as more emergency responders arrived in the neighborhood.

"I been listening to the news all day so I was kind of preparing," Green said. When the tornado warning came up on her iPad, Green said she ran to a closet.

"Then I heard the big roaring, it didn't last more than three minutes," Green said. "I just laid down and just kept praying."

Green said she was unsure of whether any neighbors had been injured or killed down the block where several homes were destroyed.

"We probably won't know anything until daylight comes," she said. "I'm hoping that everybody got out all right."

Elsewhere in the region, where the weather had calmed, dozens of people faced Christmas having lost their homes and possessions. But many they said they were thankful to see another Christmas.

Tony Goodwin ducked into a storm shelter with seven others as a storm pounded Tennessee and other states in the southeastern U.S. He emerged to find his house in Linden had been knocked off its foundation and hurled down a hill by high winds.

Goodwin's neighbors weren't so fortunate. Two people in one home were killed.

"It makes you thankful to be alive with your family," he said.

On Friday, parts of Mississippi remained under a flood warning. Weather forecasters from the National Weather Service warned that a strong storm crossing the central part of the state could produce hail and winds of more than 40 mph. The storm was bringing with it the risk of falling trees, downed power lines and flash flooding, officials said.

But that didn't stop some from spending their Christmas giving rather than receiving.

Nicholas Garbacz, disaster program manager for the American Red Cross of North Mississippi, said members of the Marine Corps brought donated toys to a center in Holly Springs for children whose families were hit hard by the storms. Two of the seven people killed in Mississippi were from the Holly Springs area.

Dozens of children and their families showed up Friday morning to pick up a toy or other items they might need to recover from the storm, Garbacz said.

More severe weather was also in store for parts of Georgia and Tennessee that were again being pounded with rain. Residents were warned to brace for flash flooding and possible tornadoes.

Among the dead were eight people from Mississippi, including a 7-year-old boy who perished while riding in a car that was swept up and tossed by storm winds.

Six people were killed in Tennessee, including three who were found in a car submerged in a creek, according to the Columbia Police Department. The Tennessee Emergency Management Agency said the victims were a 19-year-old female and two 22-year-old males.

One person died in Arkansas, and dozens of homes were damaged or destroyed.

As the rain continued to fall, Alabama Gov. Robert Bentley on Friday issued an emergency declaration that covers any part of the state experiencing flash flooding. Officials in southeast Alabama are particularly concerned, as Pea River is approaching record-levels near the town of Elba, which has a history of severe flooding.

Dozens of people were injured in earlier storms, some seriously, said Greg Flynn, spokesman for the Mississippi Emergency Management Agency.

The agency said in a statement Friday night that there were reports of another death and another person missing.

Search teams combed damaged homes and businesses for people still missing, a hunt made complicated because so many had left for the holidays.

Peak tornado season in the South is in the spring, but such storms can happen at any time. Exactly a year ago, tornadoes hit Mississippi, killing five people and injuring dozens.

Barbara Perkins was told Thursday by an insurance agent that her storm-damaged home in Falkner, Mississippi, was a complete loss. But Perkins — who survived the storm hunkered down inside a closet with her husband — said she was happy just to be alive. Two neighbors had died in the storm that swept across the southeastern U.S. earlier this week.

"You kind of stop and realize what Christmas is all about," Perkins said.