The holiday season can be overwhelming for both humans and pets, as evidenced by a small dog who was recently pictured suffering an “existential crisis” during a wintery photo shoot.

Last week, dog-mom Lauren Carter tweeted a hilarious image of her two pets from a professional portrait session, and the post has since gone wildly viral with over 757,000 likes and more than 175,000 shares.

In the photo, her pups are flanked by evergreens as faux snow falls around them. Her more chipper dog, Opiee, seemingly smiles at the camera while wearing a string of lights. But her other dog, Mika, is desperately staring into the distance with an empty-looking gaze, apparently unimpressed by her jaunty hat and jingle bell collar.

“Took my dogs to take their yearly Christmas photos. It’s really hard when you have one super photogenic dog and one dog having an existential crisis,” Carter wrote.

In reply, jokesters seized the opportunity to speculate about what Mika could be thinking behind her grave gaze.

"What does it even mean to be 'good'?" one user imagined the pooch pondering.

How I look on the outside VS. How I feel on the inside. pic.twitter.com/K5uBzuliZ5

They ask you how you are & you say that you're fine. & you're not really fine but you just can't get into it bc they would never understand... pic.twitter.com/EzINYSR4SB

"How I look on the outside vs. how I feel on the inside,” another offered, in a post juxtaposing the two dogs.

Sometimes she’s rubs off on him. pic.twitter.com/hVOKPvnzbw

"Sometimes she rubs off on him,” she explained, sharing a somber-looking image of the pups in reindeer hoods.

Sometimes he rubs off on her. pic.twitter.com/Sd1QTkqG0V

“Sometimes he rubs off on her,” she added, posting a sweet photo of Opiee nuzzling Mika’s face, as they sported Santa Claus and elf outfits, respectively. 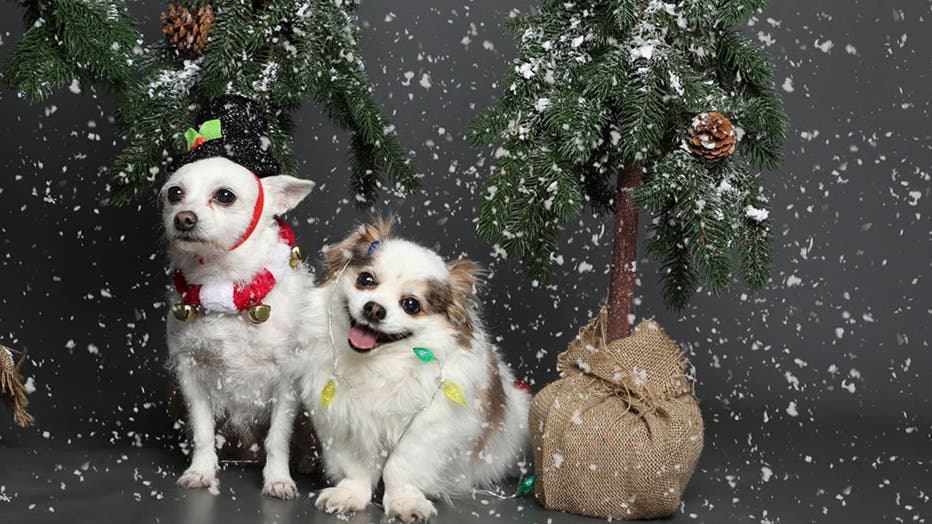 The holiday season can be overwhelming for both humans and pets, as evidenced by a small dog who was recently pictured suffering an “existential crisis” during a wintery photo shoot. (Lauren Carter)